THE THIN EDGE | The storming of Capitol Hill has context 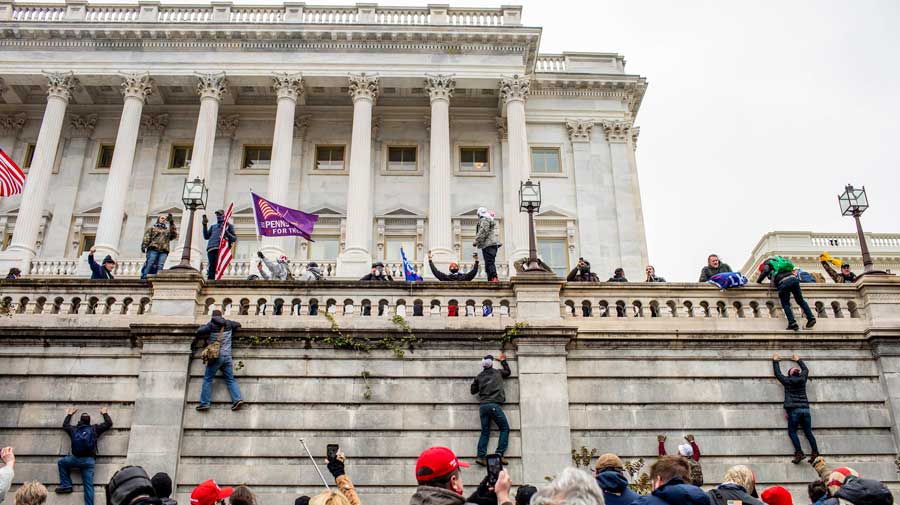 Supporters of Donald Trump climb the walls of the US Capitol on Wednesday. The vandalism that followed had no parallel in modern American history.
Jason Andrew/The New York Times
Ruchir Joshi   |   Published 12.01.21, 01:51 AM

In early 1979, the US-backed Pahlavi regime was overthrown in Iran, bringing Ayatollah Khomeini to power. In November '79, Americans in the US embassy in Tehran were taken hostage; a month later, Soviet troops brazenly rolled into Afghanistan. In America, these events were widely perceived as national humiliations, ensuring that Jimmy Carter — one of the most decent and thoughtful men to occupy the White House — became a one-term president.

Forty years ago this month, Ronald Reagan, a B-grade Hollywood actor, a know-nothing and clumsy blusterer, took oath as president of the United States of America. Over the next eight years, Reagan and his Republican Party minders normalized several things that were, till then, only latent in American politics. Chief among these was the acceptance in top Republican political circles that a US president had no need for any great intellectual ability, he could get away with being a TV-friendly ‘face’, a constructed icon and a delivery-vehicle for vote-winning rhetoric, while his shadowy manipulators executed the agenda of the rich and the powerful.

Attached to this was the rebooting of naked American jingoism, the motto of ‘My country, right or wrong’, that had taken a much-deserved beating in the 1960s and 1970s. In this, Reagan and his cohorts were helped by the falling of historical dice. As the US government propped up all sorts of brutally murderous gangs — from the Contras in Nicaragua to the Apartheid fascists in South Africa to Zia in Pakistan and, via him, the Afghan mujahideen, which, later, mutated into al Qaida and the Taliban — the Soviet Union began to collapse under its own contradictions and deep-seated rot. By the end of the 1980s, the Soviet game was up and the Reaganites were quick to claim undeserved credit for the demise of the ‘Evil Empire’.

If American jingoism was projected shamelessly around the world, the Thatcher-Reagan economic mantra of selfishness and ‘me-first’ was disseminated equally forcefully at home, repeatedly convincing voters that the ‘trickle-down’ theory was not actually a monumental fraud perpetrated on a majority of Americans but a viable economic policy. The great public programmes stemming from the FDR years and the Kennedy-Johnson administrations were ruthlessly shrunk. The idea that civil rights, education, healthcare and economic opportunity should all be increasingly available to the underprivileged of the richest country in the world was relentlessly attacked and dismantled. Alongside this began a set of surreptitious programmes aiming to narrow the voting rights for African-Americans and other historically deprived minorities because the Republicans understood fully well that poor people of colour were unlikely to vote for a party that was aiming to keep them poor indefinitely.

When Reagan came to power, the 15 richest Americans made on average 27 times more than that of the bottom 50 per cent. Today, the top 1 per cent makes 81 times more than that of the bottom half of the US population. Such is the absurd momentum of what Reagan and his minders set in motion and so hard has it been to reverse in the 16 years of Democratic presidencies since 1981 (presidencies not often blessed with a Democrat majority House or Senate) that in 2018 the top 400 Americans paid a lower effective tax rate (23 per cent) on their incomes than the bottom 50 per cent (which paid 24.2 per cent).

The story, however, can’t be understood only through the lens of economic data.

I was newly at my strongly left-leaning liberal arts college in Vermont when Reagan defeated Carter. My campus, often visited by the local activist, Bernie Sanders, went into mourning. I was flummoxed as to how a country could choose an obvious shyster like Ronald Reagan over Jimmy Carter. When I got to America, I imagined I had arrived into one of the most advanced zones of knowledge in the history of humanity. In one sense, this was absolutely true: areas of the US were home to the most complex study of science in the world, the most advanced medical institutions, the most sophisticated and nuanced milieus of social sciences, arts and culture. Yet, it quickly became apparent that a frightening number of Americans across all classes were abysmally ignorant about the world, many of them steeped in archaic beliefs that would be right at home in the most backward village in India; with a shock, I realized that a huge surplus of money and comfort did not necessarily equal being educated or knowledgeable; this last I already knew from many people of my own class at home, I just did not expect to find the same disjunction in America.

Twenty years later, by the time the ‘hanging chads’ ‘swung’ the election in favour of George Dubya Bush, I had no reserves of surprise left; I felt only dismay and horror. Al Gore and George W. Bush were both from elite American colleges, but by then I knew that an Ivy League education didn’t matter in US politics. Gore might be the thinking and informed man that he was, but the cloddish Bush had the larger silver spoon and his daddy’s posse of devious back room politicos. The people who had voted Reagan into power and their ideological children had now voted in another ignorant, narrow-minded puppet of wealthy manipulators, even if it was by a questionable, hair-thin margin. Till another silver-spooner took the presidential oath four years ago, I thought Bush Junior was the worst person to have as American president when 9/11 happened. After a week or two of Trump’s presidency, I found myself being grateful Trump hadn’t been in charge in 2001.

The sad tragedy is that the mix of the uneducated poor and the privileged cynics weren’t the only people who brought Dubya B and Donald T to power. Even after the devastations of the last four years, 74 million Americans still voted for Trump’s continuation. Among them, for instance, was Brad Raffensperger, the secretary of state for Georgia and the administrative ‘hero’ of the Georgia elections, who, from all evidence, is neither uneducated nor ignorant. They voted for Trump despite the horrific separation of children from immigrant parents; despite Trump’s backing of neo-Nazis and murderously racist police; despite strong indications that Trump had treasonously conspired with Russians to cheat himself into the presidency.

The mob that broke into the Capitol on January 6 was, arguably, a fringe of the crazed, stupid people that you find in any country, but it was also the tip of an iceberg that runs 40 million Americans deep, as in the number of Trump voters who believe — on no evidence whatsoever — that the election was stolen from them. Those people and their worldview are the throbbing legacies of Joseph McCarthy, Richard Nixon, Ronald Reagan, George Bush and Dubya Bush. Anyone who has studied recent American history should stay worried, very worried.