The rising at Shaheen Bagh 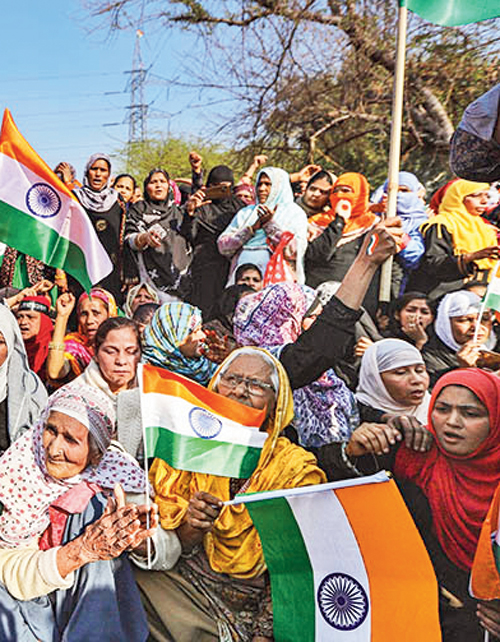 Contemporary propaganda, which has an air of arrogance, gets panicky when a genuine myth is born. Propaganda and media in general seek to create a set of diversionary tactics. The regimes itself, based on a previous myth, replays its old self to no avail. Amit Shah and Narendra Modi raise the slogans of patriotism and law and order. Members of the majoritarian community impose their patriarchal, masculine clichés of violence, flaunting guns with little effect. Democracy watches a myth grow with quiet fascination. One sees all this as one witnesses the growth of Shaheen Bagh. Who would have thought that a small group of women protesting against the rules of citizenship could change the course of history and provide Indian democracy, reeling under the procrustean power of patriotism and security, with a new life-giving myth? Shaheen Bagh has to be read as a new myth of democracy challenging the catechism of majoritarianism, electoralism and clerical governance.

I sensed this first when a friend of mine, a diehard academic, came home one day delighted with himself. A self-styled critic of the world at large, he came to me excitedly and claimed storytelling was born again today — not news, storytelling. I went to Shaheen Bagh and I can begin a katha on democracy, create an Arabian nights of democracy, a retelling of democracy.

I felt he was being too romantic till he retorted romance is a part of democracy. A myth deals with contradictions, with dualisms, with reconciliations, and he said Shaheen Bagh does just that. He said citizenship today is a middle-class idea. It has no space for the vulnerability of the minority. At Shaheen Bagh, it is the vulnerable, the minority, that has returned agency to democracy. They did it by showing minorities need not be minoritarian. They need not wallow in correctness and passivity. They can speak confidently on behalf of democracy, all of democracy. I was intrigued by what he said and went out and met others who were performing pilgrimage to Shaheen Bagh, an outpouring of hope and excitement that was incredible to watch. My friend added myth needs belief and a powerful story and Shaheen Bagh provides both.

As someone who was more grammatical, I went out interviewing people reconstructing the myth of Shaheen Bagh. Shaheen Bagh, I realized, was not just a story of a collection of Muslim housewives who created a historical protest. It was a local event that acquired a charismatic power. Ironically, the media helped because the photographs showed how a vulnerable group could challenge power. It was literally an Indian articulation of Václav Havel’s classic essay, “The power of the powerless”.

The women used their vulnerability counter-intuitively. The body, the women’s body, often a vulnerable object, now becomes a symbol of protest. The body, almost seen as passive over the last few decades of rape, riot and displacement, displays an agency, a theatre of action. It becomes site and medium of protest. This counter-intuitive body resonates the new language of protest, speaking many dialects but resonating a common message. In doing so, it breaks another stereotype. The street, so far under the imperial control of mobs, crowds and rioters, becomes the site for democracy for an appeal to diversity. The common sense, the housewifely nature of the women, adds to it the power of generations. At Shaheen Bagh, one saw grandmothers, mothers and their children protest as a community. It added a certain agelessness to protest.

In this very act of theatre, the citizen is no longer a passive spectator but an actor. Shaheen Bagh as ritual creates the transition from case studies of victimology to the creativity of citizenship. It also breaks another myth of coercive majoritarianism, where a minority loses its voice, becoming marginal or politically correct, playing the part but afraid to claim intellectual ownership of the whole. Here, Muslim women discarded their double minoritarianism to speak for democracy and claim citizenship to be a constitutional sacrament, not an instrument of certification, that it arose out of the requirements of diversity and not out of the convenience called uniformity.

One has to explore the encounter between the two myths, the hegemonic myth of the Bharatiya Janata Party’s rise to power and its construction of electoral democracy and Shaheen Bagh’s myth of citizenship. The BJP’s rise to power goes back to the Gujarat riots where a majoritarian violence sought to heal a so-called wound of history. Secularism as pluralism lost out to majoritarianism. Shaheen Bagh is a peaceful revolt of the housewife. Gujarat was a riot of crowds and cadre. While 2002 reeked of genocide, Shaheen Bagh evokes the salt satyagraha. Secondly, if the regime today evokes majoritarianism and the power of uniformity, Shaheen Bagh summons the creativity of diversity, confronting uniformity with difference, pitching community against cadre. Shaheen Bagh celebrates the eloquence of the body as a form of protest. Gujarat 2002 reminds one of the silence of the body during the riot. Shaheen Bagh creates a poetics of diversity to underwrite the eloquence of its faith in citizenship and the Constitution. It is an appeal to normativity, challenging the physicality of the majoritarian that electoralism cannot match at the symbolic level. The power of symbolism is clear, and this is why it unnerves Shah who desperately, in knee-jerk style, calls it an electoral stunt, a political diversion. The firing on the streets captures the machismo, the patriarchal power of a regime suddenly speechless before the women and children of Shaheen Bagh.

In the minds of the BJP strategist, Shaheen Bagh is amalgamated with the presence of urban Naxals and terrorism. It is attacked as a violation of civic order, an impediment to everyday traffic, but banal history is no match for myth.

The regime realizes bullets and violence are no longer an answer to the quiet silence of protest. Now myth meets countermyth on the streets of Indian democracy. But there is an innocence to Shaheen Bagh that children add, playfully claiming childhood to be a prelude to the civics of citizenship. There is a sense of spontaneity, community and meaning by which the dominant myth has been ambushed. It is as a myth, not as a fragment of news, that Shaheen Bagh has to be confronted. So a new battle of ideas and ideals begins.

One realizes also that Opposition parties have little to do, behaving as if they are unemployed for want of creative ideas. It is clear that Shaheen Bagh is now dependent on civil society to sustain it as a myth. It has to create a spiral of protest and storytelling elsewhere. As my academic friend reminded me, the oral has to be sustained. In fact, Shaheen Bagh restores the power of orality, the magic of the face-to-face with democracy. Democracy is witnessing the magic of orality, its ability to create a mnemonic of sharing of symbols which is more significant than democracy as an arid rule game. In the era of Trump, Modi and Abe, where creative politics had reached a standstill, Shaheen Bagh is a sign of hope for the creativity of democracy. All civil society has to do is to create new Shaheen Baghs in new domains. Democracy will come alive between the drama of protest and the sheer power of storytelling. Maybe my friend was right. A sense of the romantic adds to the power of the real as a new poetics of democracy is created on the streets of Shaheen Bagh. The future has come alive in the struggles of present.

Shaheen Bagh: Government didn’t care for us till now. Will it, if we shift?

SC upheld right to protest but other citizens also have rights: Interlocutors at Shaheen Bagh