The elevation of Rishi Sunak, Narayana Murthy's son-in-law, is a triumph of class over colour 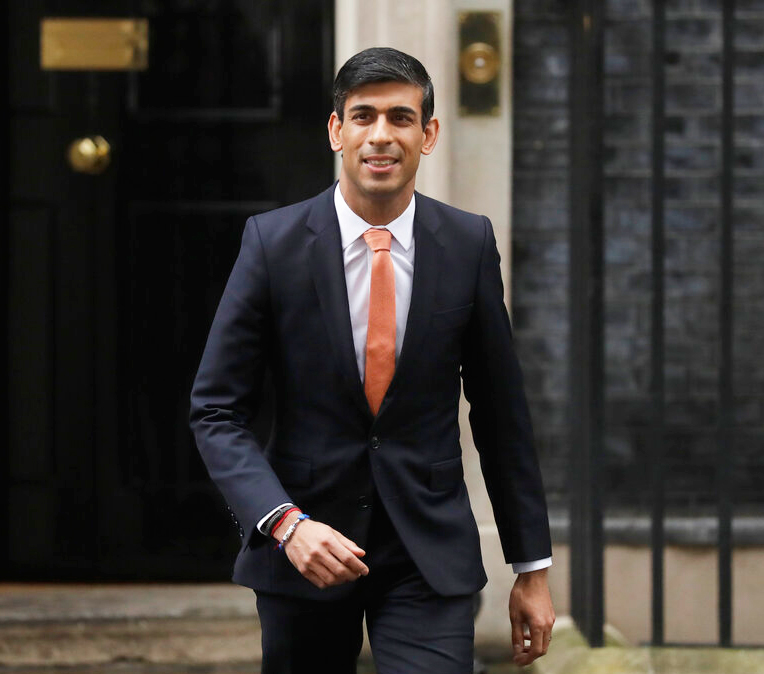 British lawmaker Rishi Sunak, and Chancellor of the Exchequer leaves 10 Downing Street, where he was given the job by Britain's Prime Minister Boris Johnson, as the former Chancellor Sajid Javid, resigned, in London, Thursday, February 13, 2020.
(AP)
Swapan Dasgupta   |     |   Published 19.02.20, 06:49 PM

Last week, after Sajid Javid resigned in a huff as chancellor of the exchequer, the British prime minister, Boris Johnson, sprang an almighty surprise by replacing him with Rishi Sunak. The surprise in Westminster and among the editorial classes was understandable. Hitherto known in select circles as being among the bright, young ex-bankers who serve their political apprenticeship as junior ministers, Sunak, it was sneered, was better known in India than the United Kingdom. The reference was to his status as the son-in-law of N.R. Narayana Murthy, the founder of Infosys.

The sneering brigade was being unduly patronizing. No doubt Sunak had married well and boasted an impressive portfolio of properties on both sides of the Atlantic — not to mention his wife’s equity stake in the iconic Indian IT company — but there was more to him than affluence. Sunak belonged to that significant class of immigrants of Indian origin — his route to Britain had been via East Africa —who have not only made the best of opportunities that their country of adoption has to offer but also climbed to the top of the British Establishment.

There is a strong perception that unlike the United States of America, which is genuinely appreciative of talent and merit, British society is too socially stratified and closed to newcomers. Class and colour, it has been felt by both outsiders and insiders, have been big deterrents to the UK coming to terms with the post-Empire world. In India, where a political antipathy to the raj coexists uncomfortably with a sneaking admiration for institutions bequeathed by the British, this has translated into an attitude of prickliness. The Indian Establishment in particular has been quick to take offence at British attitudes, even when none was intended. This wariness has not changed even after unending signalling from London that Indo-British ties are now an “equal partnership”. Neither has the fashionable British emphasis on ‘diversity’ made too much difference on Indian attitudes, which sometimes seem frozen in the 1960s, and on the unwelcoming attitudes to Indian immigrants.

Occasionally, but very occasionally, a perusal of the non-tabloid British media gives the impression that old attitudes are hard to shake off. Writing in his popular Political Sketch column in The Times, Quentin Letts suggested — perhaps more in jest — that “skinny Rishi lacked the girth for a great office of state. Such tight-buttoned, ink-monitorish jackets he wears”. The next day, he persisted in a similar vein. Writing on the first meeting of the rejigged cabinet, he observed: “Rishi Sunak, 39, the new Chancellor of the Exchequer was loving it. All shiny, his teeth a-gleam, he rocked with excitement. He had a rubbery bangle on his right wrist and seemed to be wearing a start-of-term suit. Matron may need to check that his mum sewed it with his name tapes.”

Snobbery in English society is quite subtle. In some circles, there is a quiet disdain for the sharp-cut ‘Italian’ suits preferred by some of the more successful in the financial sector. Certainly, in some circles of London clubland where the premium is on ‘comfortable’ clothes, Sunak would be considered flashy. He certainly presents a contrast to the prime minister who crafted his political career by making a virtue of his carefully cultivated dishevelled looks and unkempt hair.

However, this is where the snobbery begins and ends. Despite all the asides at Sunak being too keen — an attribute that, along with earnestness, finds disfavour among the more traditional Tories — there is no hint of condescension. As a former head boy of Winchester College and a first class graduate of Lincoln College, Oxford — his MBA from Stanford University doesn’t count all that much in these circles — Sunak is unquestionably ‘one of us’. More to the point, even his parliamentary constituency — the safe Tory seat of Richmond in Yorkshire where he succeeded William Hague as MP — is absolutely kosher by the standards of British Toryism. Sunak may be of Indian origin and takes oath on the Bhagwad Gita, but in social terms he fits more into the traditional Tory groove than, say, Margaret Thatcher who had to — in another age — suffer condescending jibes about being a grocer’s daughter.

The elevation of Sunak demonstrates more vividly than anything else that what really counts in contemporary Britain isn’t colour but class. It is all about the ability to fit in and play the games according to the rules of the game. Neither Sunak nor the home secretary, Priti Patel, has ever played the ethnic card. They haven’t tried to benefit either from affirmative action, which in the UK goes by the name of promoting ‘diversity’, or attempted to guilt-trip white Britons by invoking political correctness. Both Sunak and Patel have been part of the mainstream debates in British politics. They have won their seats in the House of Commons from constituencies that have a negligible number of ethnic minorities.

Patel, for example, has been at the heart of the larger debate on Brexit, championing the departure from the European Union with the feistiness with which she has championed a no-nonsense approach to law and order. She is completely unapologetic about her commitment to the type of politics advocated by Thatcher. Nor, for that matter, has she been squeamish in her support for India’s prime minister, Narendra Modi. I once remarked to her that if she grew tired of British politics she should consider a future in the Bharatiya Janata Party in India.

On his part, Sunak has always been regarded as an MP who has understood the gut impulses of the Conservative Party. In a report in Sunday Times, its political editor, Tim Shipman, wrote that the former prime minister, David Cameron, was quite shattered when in 2016, Sunak cast his lot with the pro-Brexit campaign. On hearing the news, Cameron is said to have remarked to George Osborne, his chancellor of the exchequer, “If we’ve lost Rishi Sunak, we’ve lost the future of the Conservative Party.” Likewise, when Sunak joined two other young Conservative MPs in announcing their support for the candidature of Boris Johnson, the former prime minister, Theresa May, whose resignation had triggered the leadership race, is said to have turned to her aides and exclaimed: “Oh my God. This means Boris has won.”

It is fashionable in some circles — not least in the Indian foreign service — to decry the UK and even suggest that the country has never fully got over its obsession with the Empire. Indeed, Brexit was viewed as a last-ditch stand of the beleaguered English to get back race pride by delivering a hard kick to the immigrants who had changed the country’s demographic profile unrecognizably. While economic decline, especially in Northern England, may have contributed to the yearning for national sovereignty, these impulses weren’t necessarily cloaked in Little England insularity. How else is it possible to explain the astonishing fact that two of the UK’s most important ministerial posts — chancellor of the exchequer and home secretary — are occupied by individuals of Indian origin, first-generation immigrants. If Agra-born Alok Sharma’s position as business and energy secretary is added to the list, it would suggest that British Indians have not only arrived but made it to the High Table under a dispensation that stands for nurturing the soul of Britain.

If post-Brexit UK wants to showcase itself as an opportunity society, it needs to merely look at Boris Johnson’s cabinet.

Sunak tipped for promotion in shuffle

Sajid out, Rishi is new chancellor