The skeleton of internal contradictions tumbles out of the cupboard, once again 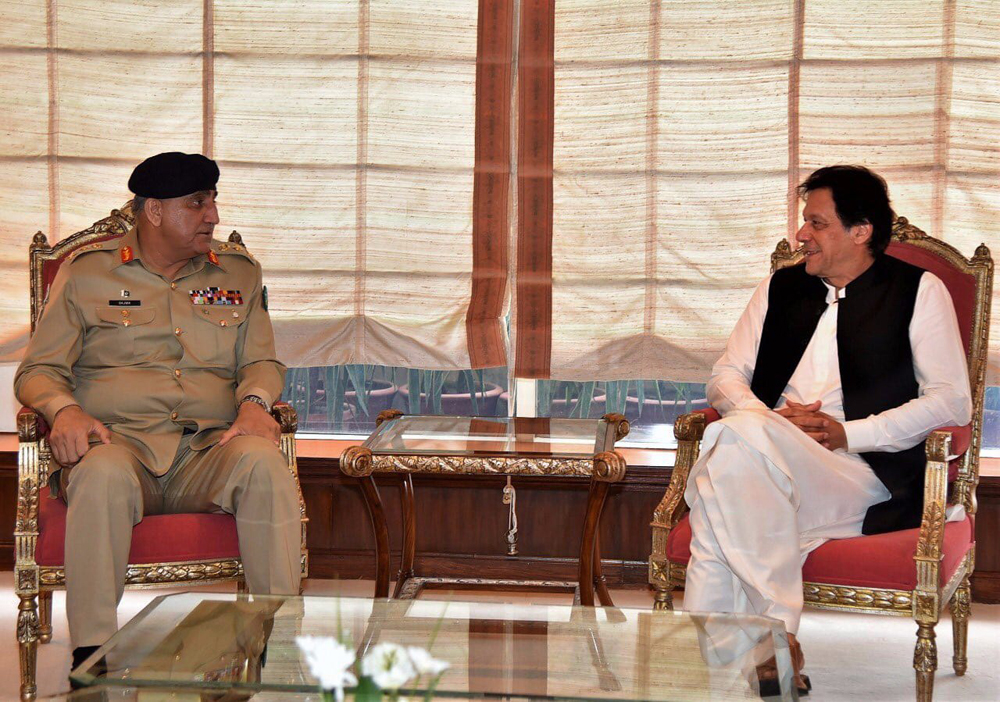 The completion of Pakistan prime minister Imran Khan's first year in office in August 2019 coincided with the notification of General Qamar Javed Bajwa's three-year extension. It was seen as the most friction free civil-military interface in Pakistan since Pervez Musharraf's military regime
(@PtiNorthPunjab on Twitter)
T.C.A. Raghavan   |   Published 17.12.19, 07:02 PM

Just when Pakistan seemed set on a linear course, it surprises you once again. The linear path appeared to have consolidated further when in August this year the prime minister, Imran Khan, gave a three-year extension of tenure to the incumbent chief of army staff, General Qamar Javed Bajwa. At the time, it seemed unsurprising. The explanation given was geopolitical: the situation in Afghanistan and the legislative changes made in India with reference to Jammu and Kashmir and Article 370. The notification issued on August 19, personally signed by Khan, thus cited ‘regional security environment’ as the reason.

But for many others, the reasons were more direct. Khan was elected in July 2018 through an election, which was, or so it appeared, the last act of the process of a ‘creeping coup’ where the higher judiciary acting in concert with the military high command sought to ensure that the incumbent prime minister, Nawaz Sharif, did not secure another term. The preferred candidate was Khan, charismatic and at the head of a political party in his own right. What titled the scales in his favour were the military and the judiciary. Sharif’s tenure as prime minister from 2013 to 2017 had been marked by a series of frictions with the army through three chiefs of staff — Ashfaq Kayani, Raheel Sharif and Bajwa. When he was finally ousted and debarred from holding office in the future by a Supreme Court order, it was evident that regardless of the reasons given by the court, Sharif had run his course in trying to assert civilian supremacy in Pakistan.

In terms of prevalent jargon, the Pakistani ‘Deep State’ had acted against him. An older vocabulary would have used the term, ‘Establishment’. In the longer view of Pakistan's history, the outcome was the same: the ‘twenty year coup cycle’ of Pakistan had asserted itself — 1958, 1977, 1999 and 2018. The difference in Sharif’s unseating was that it left his party, which was greatly weakened, in charge and kept the path open for Khan to win the general election and form the government.

To many, it seemed that a better civilian-military equation that would result from this was perhaps what Pakistan really needed. As Khan completed his first year in office in August 2019, the event coinciding with the notification of Bajwa’s three-year extension, most would grant that this was easily the most friction free civil-military interface since a new phase began in Pakistan’s political history post Pervez Musharraf’s military regime. So the extension seemed to be in the natural order of things for Pakistan — a civilian government with a popular mandate but a government with which the military was comfortable. For many Pakistan watchers, this hybrid was the holy grail that had long eluded the country and the nectar of internal stability — regardless of the manner in which it was extracted — seemed within reach.

A series of hearings late last month in the Supreme Court upset this trend. Apart from finding procedural deficiencies in the order granting Bajwa a three-year extension, the court raised more fundamental questions about the legal and constitutional provisions by which the extension to the army chief was being granted.

These hearings were conducted within days of Bajwa’s impending retirement and when the Supreme Court struck down the August notification of a three-year extension, many Pakistanis did feel that another phase of their country’s history may well be beginning. Technicalities apart, the Supreme Court’s point was that in the extant regulations, there was no specific provision providing for the reappointment or extension of the army chief’s service tenure. The court’s final order, giving Bajwa a six-month extension, avoided precipitating an immediate crisis. The government was also directed to pass legislation to govern tenure and extensions of the army chief within this six-month period.

Given the long tenures in post-1971 Pakistan of Zia-ul-Haq (1976-88), Pervez Musharraf (1998-2007) and Kayani (2007-2013), it is legitimate to wonder what was being missed here. Evidently, the court is now a different institution and the old civil-military tangles thus have a new ingredient in them.

Numerous explanations, including conspiracy theories, have emerged to unveil the rationale for this chain of events. Was it no more than a case of friction between the chief justice and the prime minister in which the extension issue proved of utility to embarrass the latter? Or did the tussle represent, in fact, rumblings and unhappiness within the army hierarchy — extensions to the top gun hold up promotions down the line. In between, there were other variations including speculation on whether this episode has weakened the COAS and affected his interface with the prime minister and the government. As always, such questions have no clear answers.

However, we can see these developments in the longer span of Pakistan’s history. The Supreme Court has historically acted as an adjunct to Pakistan’s bureaucratic and military elite from the 1950s. Its legitimization of different spells of military rule using dubious legal principles from ancient Rome and English common law had facilitated multiple dictatorships. One chief justice had thus cited the maxim, “that which is otherwise not lawful is made lawful by necessity”. Other principles invoked included salus populi suprema lex esto (the health, welfare, good, salvation, felicity of the people should be the supreme law) and salus republica est suprema lex (the safety (or welfare) of the state is the supreme law). The long ‘doctrine of necessity’ phase of Pakistan’s legal history ended amidst much drama in 2008 when an unseated chief justice led a movement of lawyers to effectively put an end to Musharraf’s dictatorship. In the crucible of numerous contradictions that Pakistan faced then, there were other forces that worked to usher in a new democratic phase in Pakistan’s history. Yet it was the lawyers’ and the judges’ movement that tipped the balance.

The judicial process that finally catapulted Khan to electoral victory seemed to be a setback to the political activism by the bar and the bench. The latest fracas over the army chief’s extension now suggests that the churn in Pakistan is still active. Clearly, the higher judiciary should not be taken for granted. Secondly, it underwrites that a balance among different institutions — the elixir that has for so long eluded Pakistan — remains distant. The next stage in this may well be the treason trial of Musharraf. The death penalty announced yesterday by a special court gives this issue extra drama and the matter will certainly go all the way to the Supreme Court.

What do we make of all this in the light of our own predicaments with Pakistan? It is four years now since the downswing in relations after the Pathankot attack. The Kartarpur opening provides a balance but it is a small one given the high tensions, terrorist attacks and our own robust countermeasures. One point that does stand out is that the prolonged period of tension has camouflaged Pakistan’s internal tensions. Nevertheless, the tussle over the army chief’s extension shows that the many internal contradictions remain and will continue to rise to the surface.