Only the President can increase the tenure of army chief, says Chief Justice 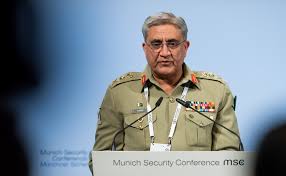 Pakistan’s Supreme Court on Tuesday suspended the three-year extension given to army chief Gen. Qamar Javed Bajwa till Wednesday and said the entire process was “upside down”.

The apex court’s ruling is a blow to Prime Minister Imran Khan who cited the “regional security environment” for his decision to grant the top general another term in office.

The suspension can raise tensions between the judiciary and the army. It comes three days before 59-year-old Bajwa’s retirement on November 29 as the chief of the army staff.

“The entire process was upside down. First, the cabinet should have given the approval, then the Prime Minister and President should have been advised,” Geo News quoted Chief Justice Asif Saeed Khosa as saying.

The petition against Bajwa’s extension was filed by a person named Raiz Rahi, who later field an application to withdraw it.

However, the Chief Justice rejected his withdrawal bid and took up the petition as a public interest litigation under Article 184, Pakistani media reported.

During the hearing, the Chief Justice said the government notification on August 19 mentioned an “extension” while the notification issued by the Prime Minister’s Office says the army chief has been “reappointed”.

“As per rules, there is no authority of extending an army chief’s tenure or his re-appointment. The government can only suspend his retirement and the army chief has not retired yet,” Khosa said.

The Chief Justice, after suspending the government’s notification, adjourned the hearing until Wednesday.

The army, which has ruled Pakistan for more than half of its 70 years, has wielded considerable power in deciding matters concerning security and foreign policies.

“Gen. Qamar Javed Bajwa is appointed Chief of Army Staff for another term of three years from the date of completion of current tenure,” according to the notification in August.

“The decision has been taken in view of the regional security environment,” the notification had said.

Khosa during the hearing said that only the President of Pakistan can extend the tenure of the army chief.

He also observed that when the matter was discussed in the cabinet, only 11 out of the 25 members approved the extension.

“Only 11 members of the cabinet gave approval of the summary for the extension of the army chief’s tenure. We cannot say the majority gave the approval,” the Chief Justice remarked.

“In a democracy, the decisions are made through the opinion of the majority.

The top judge also wondered why the notification referred to the extension as a re-appointment.

Attorney-general Anwar Mansoor contested the observations by the chief justice, saying that the extension was announced after approval of the President.

However, the chief justice suspended the extension notification and fixed the next hearing date for further proceedings.