Soaring stock indices will not improve the health of the economy

They encourage speculation instead of entrepreneurship 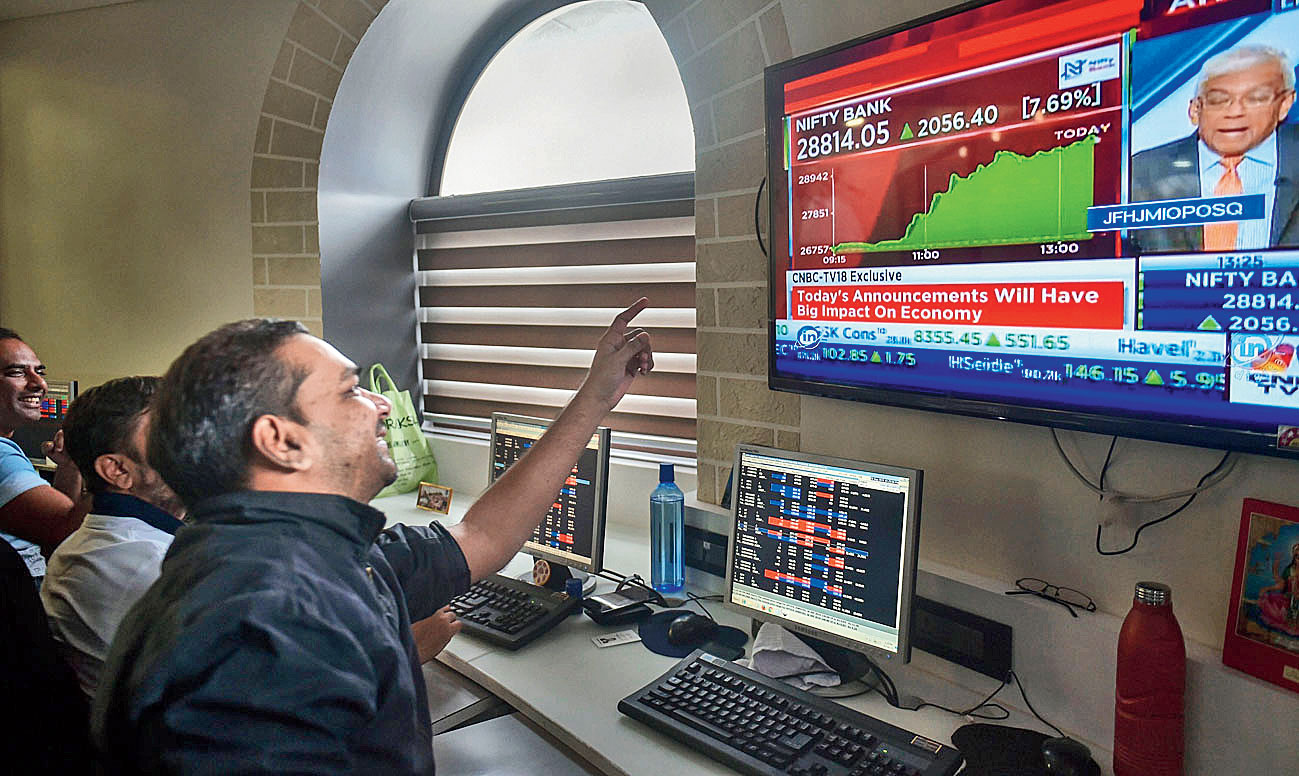 Investors at the Bombay Stock Exchange, September 20. As matters stood on that day, government policy generated hefty gains for speculators — people engaged in buying and selling paper securities as opposed to the production of goods and services.
(PTI)
Dipankar Dasgupta   |   Published 13.10.19, 07:02 PM

The Sensex and the Nifty recorded massive single-day gains of 5.32 percentage points each on September 20 following a range of tax cut announcements by the government. It might be of interest to note that on that very day, the Dow Jones index in the United States of America fell by 0.59 per cent, Nasdaq by 0.8 per cent, Standard and Poor’s by 0.49 per cent, the Hang Seng index in Hong Kong by 0.13 per cent and the Nikkei in Japan fell through most of the day, but ended up with a marginal gain of 0.16 per cent. It is tempting, therefore, to reach the euphoric conclusion that India, notwithstanding our solid integration with the global economy, is alive and kicking even as the rest of the world pants.

A surge in the stock market occurs when the demand for financial securities exceeds their supply (somewhat in the manner of fish markets). Unlike fish though, which are not easily storable, securities represent a variety of ownership rights over existing durable assets (say, machines) held by firms and used for their day-to-day operations. Purchase and sale of financial securities represent changes in ownership of already existing physical assets and not the creation of new equipment to increase productive capacity, employment and economic growth.

On September 20, the tax cuts and other measures announced by the government created expectations that the net profits of corporate enterprises in general along with dividend payouts were about to rise. Demand for shares as well as their prices moved significantly upwards, as reflected in the Sensex and Nifty figures. People who had purchased shares at low prices were able to sell them off at higher prices, thereby making, what is known as, speculative profits. As matters stood on September 20, government policy generated hefty gains for speculators — people engaged in buying and selling paper securities as opposed to the production of goods and services.

So much for the exchange of ownership rights over existing projects. As opposed to these, new projects call for expenditure on new equipment or other facilities. Such expenditure is referred to as long-term investment for capital accumulation. The expression, ‘long term’, focuses on the longevity of new assets. New equipment are expected to generate extra profit for several years through production and sale of goods and services (such as ice cream or hotel rooms). Holding on to these assets, however, instead of money or paper securities, amounts to a sacrifice of financial liquidity for the holders and stock markets bring them succour to an extent, for they allow ownership rights over physical equipment to be sold off in exchange for money. Such transactions, too, generate speculative profits or losses unrelated to real production.

As John Maynard Keynes observed in his classic, The General Theory of Employment, Interest and Money, the opportunity of getting rid of new or old productive assets leads to a “... separation between ownership and management...” of enterprises. Owners of firms — equity shareholders — cease to be interested in running the firms they own and turn instead to speculators aiming to earn profits from the sale of their ownership rights alone. This may not necessarily be the case, but excessively active stock markets, or what economists sometimes call bubbles, could well be an inauspicious signal. It is this possibility that Keynes pointed out in a much-quoted observation: “Speculators may do no harm as bubbles on a steady stream of enterprise. But the position is serious when enterprise becomes the bubble on a whirlpool of speculation.”

What then should be the driving force underlying non-speculative long-term investment? In answering this question, Keynes brought up an issue that has direct relevance for the thriving area of Behavioural Economics, which has produced three Nobel Prize winners — Daniel Kahneman, Robert J. Shiller and Richard H. Thaler. Behavioural economists question the wisdom of traditional economic theory assuming economies to be inhabited by perfectly logical people who undertake their economic decisions based on explicitly or implicitly defined rational goals, such as the maximization of profits and utility or the minimization of costs. The subject is replete with examples of normal individuals, however, whose lives are not governed by rational calculations.

Thaler, the 2017 winner, observes in his book, Misbehaving, that Keynes was “a true forerunner of behavioral finance.” To make this point, he quotes extensively from Chapter 12 of the General Theory, which discusses the question raised at the beginning of the immediately preceding paragraph.

To start with an example from Keynes, suppose that a share in an ice-making company promises to pay a higher dividend in summer (on account of higher profits earned) and a lower dividend in winter (on account of lower profits earned). A person who wishes to purchase the share should take into account the seasonal fluctuations in the stream of dividends for an entire year or even more to decide how much he should pay to buy the share. Yet, Keynes pointed out that people are known to pay more for the share in summer than in winter. This is quite irrational, since buyers are aware that the higher summer dividends will invariably be followed by lower dividends in winter.

Going back now to the calculations underlying the decision to carry out long-term investment, Keynes noted that a person is pretty much ignorant about “... the full consequences of [the investment] which will be drawn out over many days to come...” Assume that an investor builds a fashionable seaside resort. To begin with, it attracts a flow of tourists. Over time though natural causes make the seashore recede outwards from its former location. New hotels show up along the newly-perceived beach and the hotel we started out with falls on hard times.

The future being unknown, rationality dictates that long- term investment by private agents (as opposed to the government, which is not influenced by profit motives) has little rational basis. Yet, people do invest, and Keynes referred to the psychology driving such investment as “animal spirits” or “a spontaneous urge to action rather than inaction...” Neither low interest rates, nor corporate profit tax cuts, can produce clairvoyance. Hence, there is no reason to assume that such policies will produce growth miracles.

If growth remains unresponsive, the government may need to take charge of long-term investment in a big way. “For my own part,” Keynes had written, “I am... sceptical of the success of a merely monetary policy directed towards influencing the rate of interest. I expect to see the State... [to take] an ever greater responsibility for... organising investment...”

Alternatively, if economic growth has to be revived via private investment, a solution may lie in ‘Nudge Theory’ proposed by Thaler and associates. Nudges are tiny hints or changes, which push private agents in desired directions, but leave all options open. The government may well be thinking along these lines, for according to media reports, Niti Aayog plans to hire behavioural economists for its ‘Nudge Unit’ to understand behavioural changes necessary to improve the health of the economy. Soaring stock market indices, by encouraging speculation instead of entrepreneurship, are unlikely to achieve this objective.

Lowering corporate tax rate is good but not enough