The perversities of patriarchy 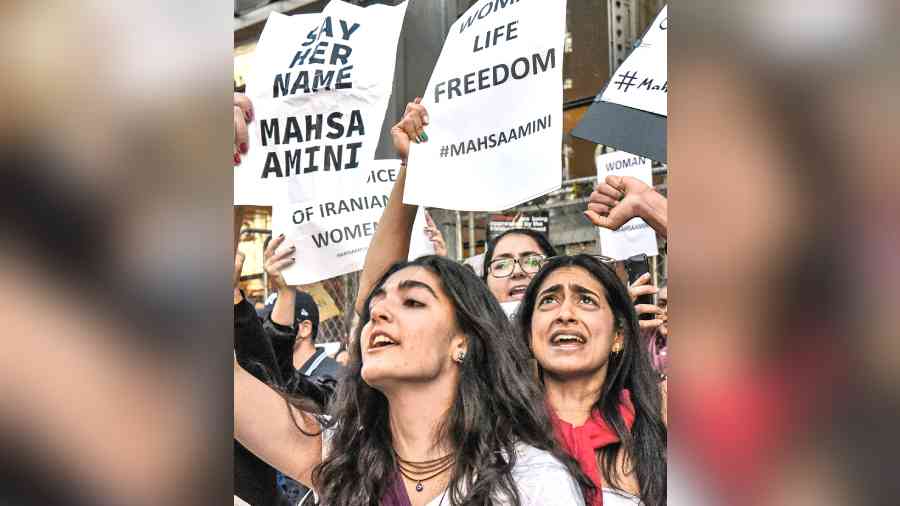 The way women across cultures are told what to do, what to wear, what not to wear, how to behave, how to sit, how to handle situations, how to speak, what to say, what not to say, among other things, makes it very difficult to survive in a world where men literally get away with everything, including murder.
Mehmal Sarfraz   |   Published 30.09.22, 02:40 AM

Being a woman is not easy anywhere in the world — be it in the West or in our part of the globe. Gender discrimination is prevalent in most societies. Some have tried to overcome this through strong laws, while other societies are struggling to give women their due rights.

In Iran, women are protesting against the death of Mahsa Amini who died after being beaten up by Iran’s morality police, allegedly for not covering her head properly. Her death has led to widespread protests in Iran and around the world.

Last week, a man from a privileged background murdered his wife — beating her to death with dumbbells at their house in Islamabad, Pakistan. Sarah Inam was Shahnawaz Amir’s third wife. They had been married for three months only. Sarah was a Canadian national who worked in the United Arab Emirates. Shahnawaz is in police custody.

Women in Pakistan are still reeling from the brutal murder of Noor Mukadam last year but there has been no respite and no reprieve from news of violence against women in our country. Every day, the women of Pakistan see a new hashtag for justice for a Pakistani woman — today it is Sarah; yesterday it was Noor; tomorrow it may well be another woman. Pakistan occupies the second-worst rank in the Global Gender Gap index. Why is it that men think they can beat up women? Why do they think they can kill women and get away with it? What sort of entitlement gives them this power that they think they cannot have an argument but, instead, have to exercise some sort of physical power over women? Even after murdering these women, the men have accused the victims and refused to admit that they are the real culprits. Blaming the victims is just vile and inexcusable.

Pakistan’s information minister, Marriyum Aurangzeb, was recently harassed and bullied on the streets of London by the supporters of Pakistan Tehreek-e-Insaf. They abused her, called her names, and kept shouting at her while she kept her calm and even answered some questions when the hooliganism stopped. That a woman who was walking alone on the streets of London was surrounded by a mob of men and women chanting all sorts of things at her is not something that can be justified as ‘heckling’ a political opponent. It is downright harassment.

We have seen how opinionated women make men uncomfortable. They make them feel insecure. Their political opinions get under the skin of men who lash out at them in various ways. From online bullying and trolling of women, which is a form of violence against them, to the harassment of women on the streets, we have seen that men react to women differently. The sexualised abuse that women receive online — be it women journalists, activists, human rights defenders, politicians and so on — takes a toll. This is what the trolls want to achieve in a way. It doesn’t necessarily silence women but it comes as a reminder that there will be some sort of ‘cost’ a woman will have to pay for voicing her opinion.

In today’s polarised political world, men also face online abuse and trolling for their opinions but the abuse that women suffer is more specifically about their gender. Apart from the abuse, their pictures are morphed, baseless and vile accusations are hurled at them that are mostly sexual in nature, and rape threats given that put their lives in danger. This ‘cost’ is not something that anyone should be subjected to just because their opinions are different from those of someone else. One can also have a civilised discussion if there is a difference of opinion. This is not just about political differences but also about censuring and censoring women for having an opinion.

The way women across cultures are told what to do, what to wear, what not to wear, how to behave, how to sit, how to handle situations, how to speak, what to say, what not to say, among other things, makes it very difficult to survive in a world where men literally get away with everything, including murder. Why is it that men are not told to control their rage? Why is it that men are not brought up to respect women and are told that women’s opinions and their choices matter as much as those of men? Women are equal to men but in some parts of the world, they are not even treated as human beings. Phrases like ‘honour killing’ — where honour is related to a woman’s choice — show that women are treated as mere objects and not as human beings. As they say, there is no honour whatsoever in killing. Taking another human being’s life because that person did not do what you wanted her to do, or because a woman said ‘no’ to you, or because a woman questioned your decision, reveals the fact that male privilege has no bounds.

Women across the world are raising their voice in solidarity with other women for the rights denied to them. It will take time for these voices to be heard. It always takes time to take power back from those who are powerful because nobody gives up power by choice. Unchecked power will take more time to quash but it will happen one day. Sometimes we lose hope but we shouldn’t. We should know that men have a lot of power and privilege in patriarchal societies. It will take time and a concerted effort to turn society equal. Those who think women can be broken are mistaken. We will challenge patriarchy till our last breath -- and take our rights. Women cannot and will not be silenced.