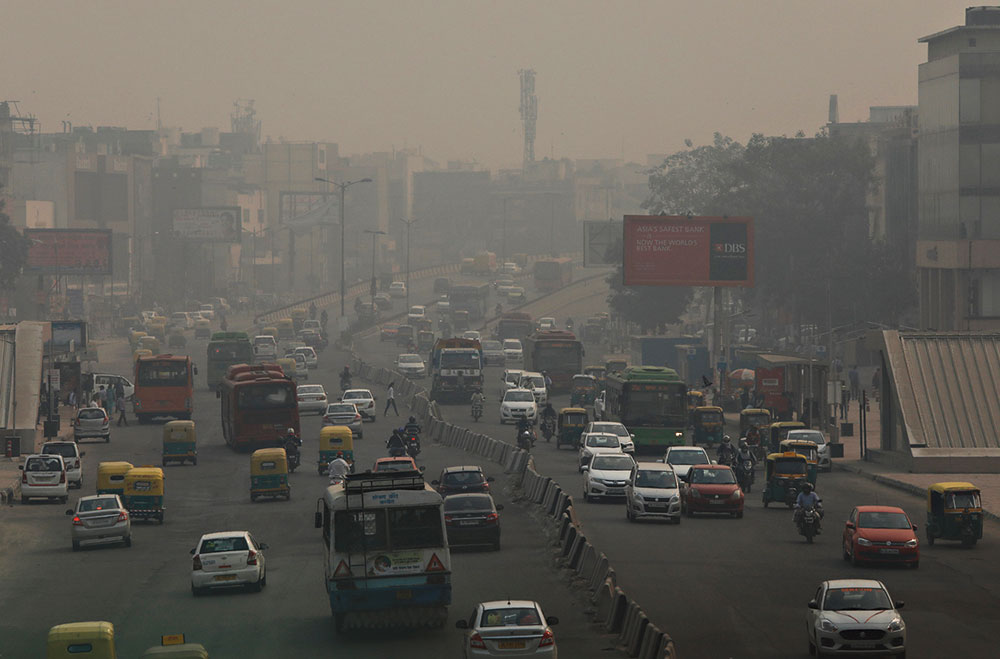 According to the Environment Pollution Control Authority, vehicles contribute 40 per cent of the total emission load in Delhi
PTI
Manini Chatterjee   |   Published 19.11.18, 02:45 AM

The national capital is a many layered city strewn with ruins and memories. But the nostalgia that overtakes its denizens at this time of the year is of very recent vintage actually. Even 25-year-olds reminisce wistfully how glorious Delhi winters used to be.

For some, November was the loveliest month — not quite freezing but with a chill in the air and mellow sunshine that imbued us with a new energy. Others preferred February, when all the gardens and roundabouts are abloom with a profusion of flowers of every conceivable hue. But everyone agreed that the best months of the year in this city of extremes lay between the festivals of Diwali and Holi.

No longer. For the past few years, Delhi unfailingly hits international headlines each winter for its terrible air pollution. Local newspapers and television channels flood us with a new vocabulary, replete with new abbreviations and scary statistics: the AQI (or air quality index) oscillates between “very poor” and “severe”, and sometimes reaches “hazardous” levels and we are lucky when it is merely “poor”. The AQI is calculated on the basis of PM 10 (5-7 times finer than hair), PM 2.5 (particulate matter measuring 2.5 micron which is 20-30 times finer than hair), and the deadliest of them all, PM 1 — said to be 50-70 times finer than hair and the most toxic.

Along with the statistics is a daily outpouring of outrage against those deemed responsible for Delhi’s poor air. Much of this outrage, of late, has been directed at the farmers of Punjab and Haryana.

Their age-old practice of burning crop stubble after the autumn harvest and before the winter sowing adds to the noxious fumes contaminating the capital’s atmosphere. There has been much effort to persuade the farmers to switch to alternative methods to remove the stubble, and it is showing slow signs of success.

The bursting of crackers during the Diwali festivities has been another big target. The Supreme Court order restricting the bursting of firecrackers to just two hours on Diwali night this year may not have been perfectly implemented. But the difference in noise levels was discernible even to a lay person’s ear.

Trucks entering Delhi from outside, construction activities that spew a great deal of dust in the air, and coal-based power plants have also been targeted for contributing to high levels of air pollution. Delhi now has a graded response action plan that kicks in when pollution levels touch particularly dangerous levels.

This year, for instance, the Supreme Court-appointed Environment Pollution Control Authority took emergency measures since the start of November. These included closure of all construction activity, all industrial activity (other than based on natural gas), all brick kilns, stone-crushers and hot mix plants for two weeks; and a ban on truck entry into the capital in the days following Diwali.

A spell of sharp showers and good wind movement have given Delhi a respite for a few days. But environmentalists know that this is unlikely to last. That is why, the EPCA chairman, Bhure Lal, has called for one more measure to tackle the bad air days that loom over Delhi: a ban or restriction on the use of private vehicles.

In a letter to the Central Pollution Control Board on November 14, Lal pointed out that vehicles contribute “as much as 40 per cent of the total emission load in Delhi and roughly 30 per cent in the region”; that even after removing trucks and diesel commercial vehicles, the remaining vehicles — particularly private diesel cars — “contribute substantially to the NOx and PM emissions”; that all cities with similar emergency plans like Paris and Beijing include restrictions on private vehicles; and that under the circumstances, “the only option is to look at either a complete ban on all private vehicles other than CNG and/or restriction on plying by number plate (odd/even).”

Amazingly — but not surprisingly — Delhi’s elites and middle classes who are otherwise the most vocal campaigners for clean air are outraged by the idea of any such restriction. People like us, who dominate the discourse in the media, have consistently refused to accept that the fumes emanating from our own little private mobile oases are also a major contributor to air pollution in the city.

This refusal was evident in the reaction to the Delhi government’s decision to impose the odd-even scheme for two weeks each in January and April 2016. Most of us were loath to give up our cars every alternate day in that short period. There was much anger against the government for trampling on our “freedom” and our “rights”, and many insisted that vehicles were not at all a major contributor to overall pollution.

Facts tell a different story. The Comprehensive Study on Air Pollution and Green House Gases in Delhi by a team from IIT Kanpur which was submitted to the Delhi government in January 2016 pointed out that “the two most consistent sources for PM 10 and PM 2.5” in both summer and winter were secondary particles and vehicles. In addition, vehicles accounted for 36 per cent of nitrogen oxide emissions “that occur at ground level” and for as much as 83 per cent of carbon oxide emissions.

Delhi’s air dramatically improved in early 2000 after the Sheila Dikshit government forced all public transport in the city — buses and autorickshaws — to switch to the use of compressed natural gas, a clean fuel.

But those gains were wiped out by the constant increase in the number of private diesel and petrol vehicles plying the streets of the city. One key goal of environmentalists is to ensure that all cars switch to Bharat Stage VI fuel and emission standards by 2020 which envisages low sulphur fuel and advanced vehicle technology to reduce emissions drastically.

Yet, cleaner fuel — like CNG before it — is unlikely to solve the problem as long as we continue to ignore public transport and rely exclusively on private cars and two-wheelers. Delhi has more than 10 million registered private vehicles — way higher than any other metropolis in the country. The number of new private vehicles shows an upward trend year upon year.

The standard excuse of private transport addicts is that public transport is “woefully inadequate”. But any long-term resident knows that the metro has transformed movement in the city. Delhi Metro is among the best in the world today, and commuting seems a dream to those who lived through a time when the city was serviced by an erratic and inadequate bus network.

The bus network is still inadequate and needs to be integrated more fully with the metro system to improve “last mile connectivity” among other things. But experience across the world shows that governments and municipalities are far more responsive to commuters’ needs when they belong to the vocal middle class and are not confined to the poor alone. Conversely, when dominant classes abandon public services and opt for private options, policymakers tilt towards their needs. This is all too visible in Delhi where pavements and cycle lanes have been destroyed to widen roads and build flyovers to accommodate the ever increasing number of cars and road hogging status symbols called SUVs.

In Europe, unlike America, public transport is central to urban life. Even well-off citizens who own cars use public transport as a matter of routine. That ensures that public transport is treated as a prime public utility and not just a social welfare programme for the poor who cannot afford cars. It also ensures that citizens across classes can hop on and off crowded buses and metro trains with ease, even while using their cars on weekends or a couple of times during the week.

If private vehicle owners in India were to follow this model throughout the year, there would probably be no spike in pollution levels to warrant an emergency “ban”. And if such a need arose, middle class citizens would not view the prospect with such outrage and fear.

Next time we search for culprits to blame for the foul air, we should perhaps look at ourselves too — even if it is in our vehicle’s rear-view mirror.