The anti-pollution mask is now a Diwali wardrobe essential, along with silks and gold. And Indians respond with a shrug and firecrackers 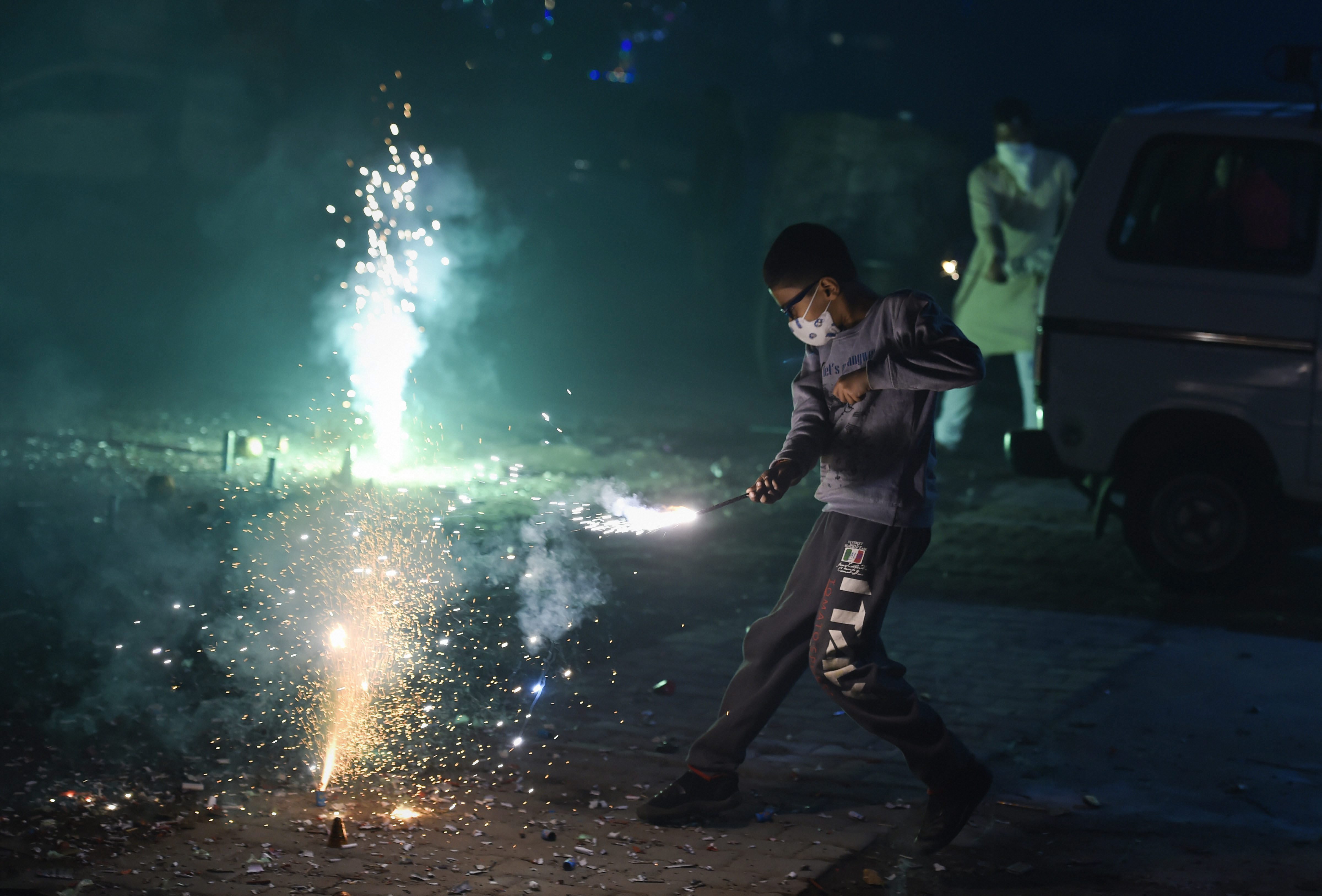 A child wearing an anti-pollution mask lights firecrackers in New Delhi to celebrate Diwali on Wednesday, November 7. Officials said the city recorded its worst air quality of the year on the following morning due to firecrackers.
Ravi Choudhary / PTI
The Telegraph   |   New Delhi   |   Published 11.11.18, 12:55 PM

Last month, a Supreme Court order set rules last month regarding the lighting of firecrackers, saying 'green crackers' with low emission levels were permitted, and could be burst only between 8 pm and 10 pm on festival days. The order was largely observed in the breach, leaving citizens choking on the lingering evidence.

It is well known that air pollution in North India peaks at dangerous levels around festival time. This year, the national capital was enveloped in a thick smog well before Diwali, which fell on Tuesday, November 7. This was largely due to the burning of crop stubble in parts of north India, a relatively recent phenomenon arising from the adoption of combine harvesting. Earlier, farmers would till plant remains back into the soil. But as harvesting combines became popular, so did burning, because machine-cut fields were left with stalks that were hard to get rid of quickly. Burning is seen as the cheapest and fastest way to clear a field and prepare it for the next crop. Despite efforts to curb it, crop burning seems to become more common every year.

On Saturday, November 10, air quality in Delhi fell from 'very poor' to 'severe'. The images below tell the story of the run-up to Diwali and its aftermath.

The map shows the fire locations detected by the Visible Infrared Imaging Radiometer Suite on the Suomi NPP satellite in a 48-hour period from October 30 to November 1. On Friday, November 9, the Indian Institute of Tropical Meteorology said some 2,100 fires had been observed on Thursday, the highest number recorded this year.
Image: NASA Earth Observatory

Fashion students march through a New Delhi marketplace to raise awareness about air pollution ahead of Diwali on Friday, November 2, as air quality falls to 'very severe' and the city braces itself for fireworks that may worsen it further
Altaf Qadri / AP

A haze envelops the skyline on the outskirts of New Delhi on the morning of Thursday, November 8, after tens of thousands of people lit firecrackers to celebrate Diwali on Wednesday night.
Altaf Qadri / AP

A police constable in Bathinda, Punjab, distributes masks to people in the street on Saturday, November 10, to protect them from the smog caused by the burning of crop stubble in fields in the region.
PTI

A municipal worker with her daughter leaves after sweeping the India Gate area in Delhi, on Thursday, November 8, as a thick haze of pollution hangs over the city the day after Diwali.
Manish Swarup / AP

A cyclist walks across a field engulfed in a thick haze in New Delhi on Thursday, November 8.
Ravi Choudhary / PTI