The assault on media freedom in Poland demands attention 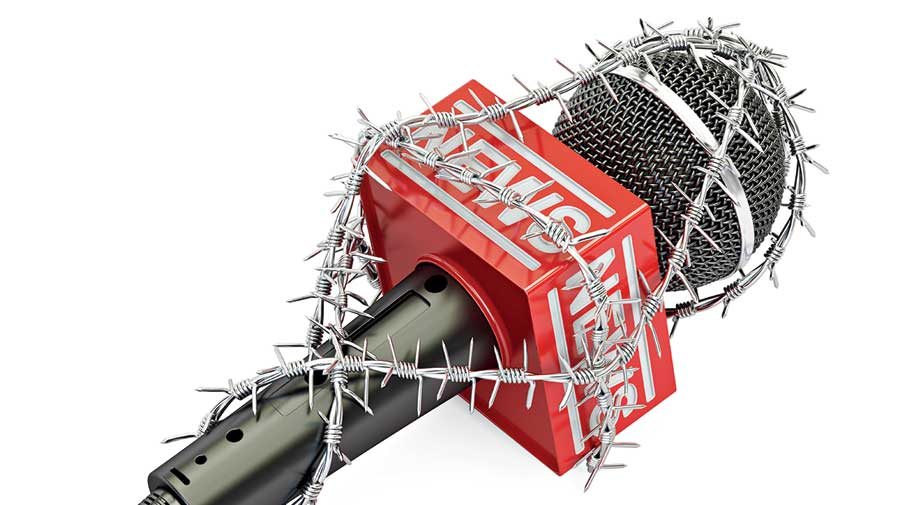 Democracy dies in darkness. One of the European Union's most fragile democracies, Poland, now faces the spectre of the night that falls when public service media have become propaganda organs for a ruling party while private, independent media are suffocated. In the end, light is cast no more on the failings and abuses of those in power, because there are no more torches to shine that light. Hungary – which is no longer a democracy – has almost reached that twilight moment, with the extinction of its last major independent radio station. Poland is still a long way from dusk, but the threat is real. In the World Press Freedom index, the country has sunk from 18th in 2015, ahead of Britain and France, to 62nd last year. (Hungary is down at 89th.).

If you only watched Polish state television news over the last fortnight, you would have no idea that Poland is currently among the countries doing worst with Covid. According to Bloomberg's Covid resilience ranking,  Poland has fallen to 50th place among the world's 53 largest economies, with only Brazil, the Czech Republic and Mexico doing worse. But switch on the official news and, after brief mention of the latest Covid figures, there are long items about how the government is speeding up the vaccination campaign, with the help of the wonderful army, and how terrible the opposition's record was on public health when it was in power. In other 'news', you learn how brilliant Poland's relations are with the US, especially in defence; how much money the government is pumping into the railways and local government; how Christians are being persecuted all over the world; and how a grave was recently uncovered showing more victims of wartime German occupation. The propaganda is more extreme, but also more skilful, than that on Polish state television in the last decade of communist rule.

Only when you turn to the independent TVN24 news do you see footage of long queues of ambulances waiting outside hospitals, because there are no more intensive care beds, and hear doctors explaining how terrible the public health situation really is. TVN24 is not BBC-impartial, but it does serious journalism and gives you the other side of the story. The same 'two realities' experience can be had switching from state to private radio, or from government-supporting papers to independent or opposition ones.

Such a hyperpolarised public sphere is already bad enough, as we see in the US but now the ruling Law and Justice party has launched a systematic attack on independent media. The methods are straight out of Viktor Orbán's Hungarian playbook. Public sector advertising  and subscriptions are withdrawn from independent media. All sorts of regulatory chicanery are used against them.Billions of public money are pumped into state  television and radio. A 'pandemic' tax is proposed on advertising revenue. A projected law on the 're-Polonisation' of media would target foreign owners of the biggest independent outlets. A state-owned petrol company, Orlen, whose boss is a Law and Justice party crony, buys both a major press distributor, Ruch, and the largest network of regional newspapers, Polska Press. The most critical papers are bombarded with lawsuits. Gazeta Wyborcza counts more than 60 lawsuits, including one from the justice minister in person. And, as European legal authorities have repeatedly determined, the independence of Polish courts has been so far eroded thatyou can no longer rely on a fair trial.

This is that old Hungarian speciality, salami tactics. With every slice, the next one becomes slightly easier for the butcher to take.

Polish media and civil society are resisting strongly, but they need a little help from their friends. The United States matters enormously here. The Law and Justice government and president Andrzej Duda make much of their special relationship with Washington. But they were strong supporters of Donald Trump, who in return gave Duda electoral assistance last summer. The administration of Joe Biden owes them no favours, and  it has an agenda strong on democracy and human rights. As well as standing up for TVN, which is owned by the American Discovery company, Washington should now highlight independent media as the frontline of defending democracy in Poland.

Britain counts for less than it once did in Warsaw, because of Brexit, but along with other liberal democracies, such as Canada and Australia, it can help turn the spotlight on this issue. Germany is of the first importance, and a German-Swiss group, Ringier Axel Springer, owns one of the most important Polish online platforms, Onet.pl, the tabloid Fakt and a leading weekly, Newsweek Polska. The Polish government tries to intimidate Berlin by constantly bringing up the Nazi past, but the proper lesson from that past is not 'Germany must be particularly reticent on these issues'. It is 'precisely because of that terrible past, Germany should be the first to speak up for freedom and human rights in Poland'.

Most important, and most problematic, is the EU. One of the most depressing discoveries of the last few years is that the EU, which spends so much time talking about democracy, is pathetically ineffective when it comes to defending democracy inside its own member states. Now it is going to hand out many more billions of Euros to those states, both from the post-Covid recovery fund (nearly €60 billion to Poland by the end of 2023) and from the Union's new seven-year budget (more than €100 billion to Poland). These huge sums will go directly to the populist nationalist governments in Warsaw and Budapest, with only minimal conditions attached. Most of those great investments trumpeted on state television news are done with the help of EU money. At the very least, the EU should make it crystal clear that, under single market rules, foreign media owners may on no account be discriminated against. It should distribute a significant chunk of the new money directly through local government – as suggested by the mayors of Warsaw and Budapest. And it should create a substantial EU fund for the defence of media freedom across the continent.

Last week, the leadership of Poland's Law and Justice party began talks with Viktor Orbán of Hungary and Matteo Salvini of Italy about forming a new populist nationalist political grouping in the EU. It is not just democracy in Poland that is at stake here; it is democracy in Europe as a whole.