Letters to the Editor: Crying an useful tool to reduce stress 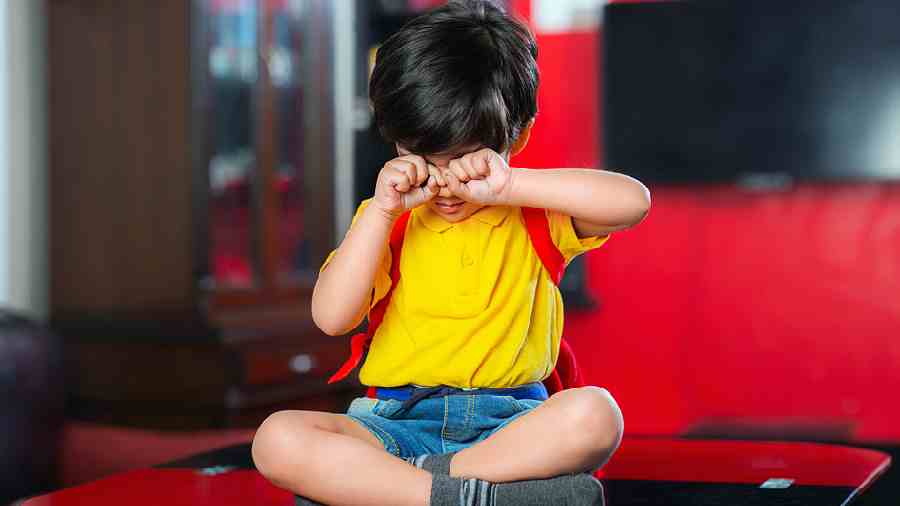 Studies have shown that crying out loud can produce endorphins and reduce stress.
Representational picture
The Editorial Board   |   Published 21.12.22, 04:06 AM

Let it all out

Sir — Many of us have frowned at new parents in movie theatres, forcing them to cart their crying children out. But having a child no longer needs to mean compromising on fun. A theatre complex in Kerala has introduced a sound-proof ‘crying room’ equipped with cribs and diaper-changing facility for parents to watch movies from behind a glass screen, albeit in the company of their bawling wards. Incidentally, a ‘crying room’ might be useful for adults too. Studies have shown that crying out loud can produce endorphins and reduce stress. While washrooms are the usual hideouts for those quick to shed a tear, a specific room to vent one’s emotions privately in public places can be an important step towards ensuring better mental health.

Sir — The All India Institute of Medical Sciences, Delhi must be praised for going tobacco-free (“AIIMS tobacco-free”, Dec 16). The various health implications of tobacco consumption are well-known. Although smoking in public is a punishable offence, those found violating this law are rarely penalised. The West Bengal government must implement strict rules against tobacco consumption in healthcare centres and hospitals. Moreover, if hospitals go tobacco-free, it will improve the general hygiene of their surroundings. As people from different social strata visit hospitals, a tobacco ban there would also raise awareness. The government should pay immediate attention to this.

Sir — Humanities and social sciences have a reputation of being pursued by less meritorious students because of the common perception that hard science subjects like engineering and medical science can secure better jobs. Indian parents often obsess over their children’s careers and force them to ignore their personal choices which, they assume, would lead to less prestigious jobs. It is essential to bust the myth that those from humanities departments are less employable than others. Hearteningly, this mindset is slowly changing as multiple career opportunities open up for humanities students.

Sir — The Supreme Court has rightly decided to reduce the excessively harsh punishment of a man sentenced to 18 years in jail for electricity theft to two years. However, electricity theft is rampant all over India and needs to be dealt with strictly. Staff from electricity departments often face assault and threats from offenders. They must be given proper security. Electricity theft by some consumers burdens others with unnecessarily increased tariffs.

Sir — When electricity thefts are reported in the business sectors, companies are let off with hefty fines. But common people often have to serve long jail terms for the same crime, even though the scale of pilferage is much lesser in this case. More importantly, people are often forced to steal electricity because of exorbitant rates of power. Sending them to jail is no solution to the problem.

Sir — It was heartening to note that over 15,000 people participated in the Tata Steel Kolkata 25k run. People from all age groups and walks of life competed in the 25-kilometre marathon and the 10-kilometre open run. This shows that more and more Calcuttans are becoming aware of the benefits of physical activity. Walking and running are the cheapest and most convenient forms of physical activity. They also boost a person’s mental health.

Sir — As a student of Class V or VI, Enid Blyton and Alistair Maclean were my favourite novelists. It is difficult to single out one Bengali author as they were all outstanding. I have pinned great hopes on the International Book Fair, which is around the corner, to track down a particular title by Nayantara Sahgal. We are lucky to live in times when we can read and collect the works of authors like Ruskin Bond, Vikram Seth, Amitav Ghosh and Arundhati Roy (“The favourites”, Dec 18).

Sir — One of the best ways of preserving water is to recycle grey water. Grey water is domestic wastewater — primarily from bathrooms and kitchens — and is usually contaminated with a variety of insoluble and soluble substances, such as detergent, dirt, lint, human hair and so on. A major percentage of India’s wastewater discharge comprises grey water. Filtration systems in every household and commercial establishment can effectively recycle grey water. Installing grey water recycling systems can not only reduce water bills and the strain on public sewage systems but also decrease our dependence on traditional sources of water. The government should popularise the recycling of grey water in urban areas.

Sir — Calcutta’s air quality has severely deteriorated with the rise of PM 2.5 in the air. Bursting of firecrackers is just one part of the problem. Burning of garbage, tyres and other waste materials in areas adjacent to New Town and Dhapa, multiple construction projects, such as the North-South metro line, all contribute to air pollution in Calcutta. Incentivising the proper disposal of garbage — brick kiln operators can reuse garbage blocks to make bricks, for instance — might be an effective solution.