What is this claustrophobia of repetitive sameness? One leader. One slogan. One flag. One colour. One caste. One. 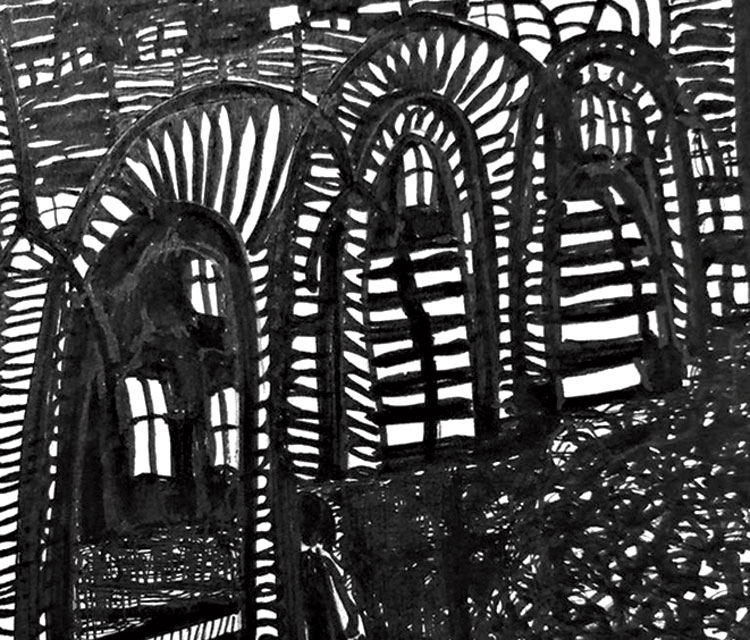 And therefore it has become even more difficult to make sense of where we are headed or where we might not be. It is like staring at that grid of whatever that you see. What do you make of it? No, it is not the way Mahadeb headed out, or the way Mahadeb might be heading back. Mahadeb is followed by illumination, even when he vanishes into the dark.

But go we must, should we not? From this noir setting closed upon itself? You see doors. And more doors within them. And within them, windows. All shuttered. And so opaque of shape you cannot tell which way they open, if they open at all. You see a city, piled upon itself. You see masonry fallen upon masonry, and masonry packed so tight it will not let anything through. Not even us. You do not see us. But that is the thing.

We have arrived at a place where you do not see us. Nobody sees us. Nobody sees the other. Nobody can see nobody. Although everybody is here, in this space, where they have been brought. Beheaded people cannot see other beheaded people. And they cannot be headed anywhere because they are beheaded.

But those beheaded bodies have bodies — arms and legs and full torsos, and they must be flailing about somewhere to some end. Flailing to be noticed, flailing to fell something, flailing so something gives and way opens. Flailing so they can, again, head somewhere. Somewhere less dark and forbidding, somewhere more airy and better lit, somewhere there is the sky to behold above.

Which we recently rocketed

With such sound and fury, my

And all the gain to be pocketed.

Where is the Chow? Kidar hai?

It is 'chun aao' time