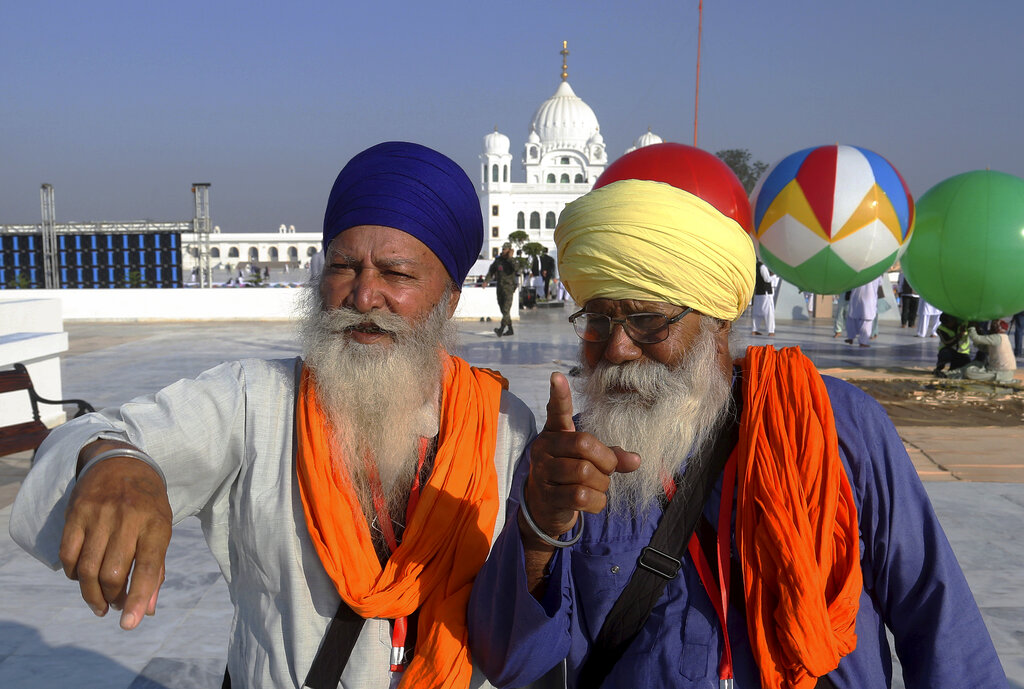 The Kartarpur Corridor is a miracle. This safe passageway between two gurdwaras in the two Panjabs — Dera Baba Nanak in India’s Punjab and Gurdwara Darbar Sahib, also known as Kartarpur Sahib, in Pakistan’s Panjab — is the political equivalent of a heart bypass. It revives, renews, pulses dormant tissues to life.

The opening of such a line of trust across the border by the two countries would have been noteworthy at any time. But the enabling of Indian pilgrims to move four kilometres into Pakistan without visas at this time is an almost unbelievable act of faith.

India-Pakistan suspicion, invective and belligerence have reached and remain in a crescendo. Never quiet or at peace, the border seethes with tension today. And the ‘any-minute’ fear of terrorist attacks has made war a chronic possibility. In such a time, for India and Pakistan to find and lift a seam of trust from the slough of animosity belongs to the category of the miraculous.

Who do we need to thank for this?

To start with, the then prime ministers of India and Pakistan, Atal Bihari Vajpayee and Nawaz Sharif, who first proposed, in 1998, and then inked, in 1999, an agreement on the Corridor. Vajpayee is no more and Sharif, a prisoner in Pakistan, is fighting for his life today. But their initiative has stayed alive, defying deep crises. Neither of them is Sikh, neither dependent on Sikh constituencies for power; yet they saw this idea, long mooted by devout Sikhs, as being eminently reasonable, eminently apolitical, and wholly unprejudicial to their countries’ respective bilateral standpoints on other contentious issues. In other words, they saw it as a stand-alone felicity. And they set the idea on track.

It needs to be noted, however, that this pathbreaking move was presaged by three former prime ministers of India — Rajiv Gandhi, who laid unwavering stress on Saarc summits being held annually; Deve Gowda, who asked his diplomatic officers to develop a culture of dialogue with Pakistan; and I.K. Gujral, who moved towards creating an atmosphere for issues-specific multi-level dialogue. Gujral’s role is particularly notable for his policy, rather inaptly called ‘Doctrine’, which recognized that while India could (and according to him, should) dispense with reciprocity in its relations with other Saarc neighbours, it cannot do so with Pakistan. Gujral’s position was that with Pakistan direct talks based on complete frankness, on the basis of strict reciprocity, were the only way forward. And in the Saarc summit in Male in 1997, he engaged with Prime Minister Nawaz Sharif with precisely that, face-to-face. Here were two Panjabis talking to each other, one imagines in a mix of Panjabi and English, on their nations’ future in peace, possibly in war, or as was even even more likely, in the corrosive limbo of war-mongering and war-mindedness.

Several rounds of bilateral discussions followed at the diplomatic level during Gujral’s tenure, leading to the chequered idea of ‘a composite dialogue’ and the emergence of eight issues to be discussed within that dialogue-frame, of which the last but not the least important was ‘promotion of friendly exchanges in various fields’. In this lay the seed for the Kartarpur Corridor idea. Mutuality is another form of reciprocity and, in Gujralesque terms, the Kartarpur Corridor is a reciprocal ‘positive’. During this birth centenary year of I.K. Gujral, we need to acknowledge his unseen presence in the two gurdwaras and in the Corridor that links them.

Prime Minister Manmohan Singh also flagged the Kartarpur idea in 2004 in one of his early public speeches made in Punjab. And so when Prime Minister Narendra Modi stood by the Corridor idea and at its effectuation, likened it memorably to the dismantling of the Berlin Wall, he was being both historical and contemporary.

The Kartarpur Corridor idea has, therefore, been a constant with India’s leadership. And so also has it been with that of Pakistan, Prime Minister Imran Khan not letting his views on India, so stridently expressed at the United Nations general assembly, come in the way of his commitment to the Corridor.

But going way beyond prime ministers and governments, overarching bilateral diplomacy, we need to recognize the real ‘maker’ of the Kartarpur Corridor. It is none other than Guru Nanak himself. The great preceptor’s spiritual aura, the moral voltage of his personality, is what has really ‘done it’. The extraordinary hold — half a millennium after his death — of the first Sikh Guru on the Sikh world is what has made the Corridor possible.

The devotion of the Sikhs to their preceptor has overcome the miasma of political suspicion, the risks of terrorism, of subversion, and has so impacted the two nation states as to make them create the Corridor. This propulsion of sheer human nobility is reminiscent of the series of unofficial ceasefires along the Western Front of Word War I in the December of 1914 that came to be called the Christmas truce. But even more significantly so since, all going well, this Corridor is not meant to be a seasonal affair but a permanent arrangement.

The Sikhs’ adherence to their 10 Gurus, from Guru Nanak to Guru Gobind Singh, surpasses devotion and amounts to a quiet, deep passion. Nanak’s teaching of a formless Creator, his message for hate-free, greed-free and ego-free living, is not easy to follow but the Sikh community has interiorized it in its own, very distinctive, ways of which the langar, the highly democratic sharing of food with those in need, is the most visible expression. The spontaneous langar offered by New Zealand’s Sikh community to the kin of those killed in the Christchurch massacre gave us a moving example of this spirit.

In the Kartarpur Corridor, this spirit has found geopolitical expression, creating a channel of trust but also, let us be mindful, a channel of responsibility as well. Enemies of peace, foes of concord or, in short, terrorists and extremists of many a stripe will want to subvert the Corridor. There is no dearth of those, at either end of it. They would want to not just make the Corridor untenable but also make all trust between India and Pakistan unworkable. And so, as much as the Corridor needs to be celebrated, it also needs to be insulated — from subversion, manipulation and distortion. It is vital that a confidence-building and trust-maintaining mechanism be set up, involving peoples’ representatives, to act as the Corridor’s keeper.

There is one other connected thought for India and Pakistan to share.

Taxila’s archaeological sites, also in Pakistan’s Panjab, are a place of significance for scholars of ancient history, including Hindu, Buddhist and Jain history. A system by which bona fide scholarly Indian interest in visiting Taxila is rendered possible will be a great spin-off from Kartarpur.

And then there is the great legacy of Indus Valley Civilization sites in both countries. A grid of safe and easy travel to bona fide students of history and archaeology in both countries needs to be set up, enabling them to visit this common legacy in the other country, not without visas perhaps but with easy-to-get visas but, more significantly, with expert guidance from scholars and archaeologists in a systematic arrangement of academic mutuality. For Pakistani scholars to be able to visit Rakhigarhi, Lothal, Dholavira et al and for their Indian counterparts to visit Harappa and Mohenjodaro would be an opportunity devoutly to be wished for.

Spiritual heritage and civilizational heritage have this in common: they are seams of the timeless in contested times, redeeming the uncompeting past from the conflicted present, liquefying conflict in the vats of knowledge.