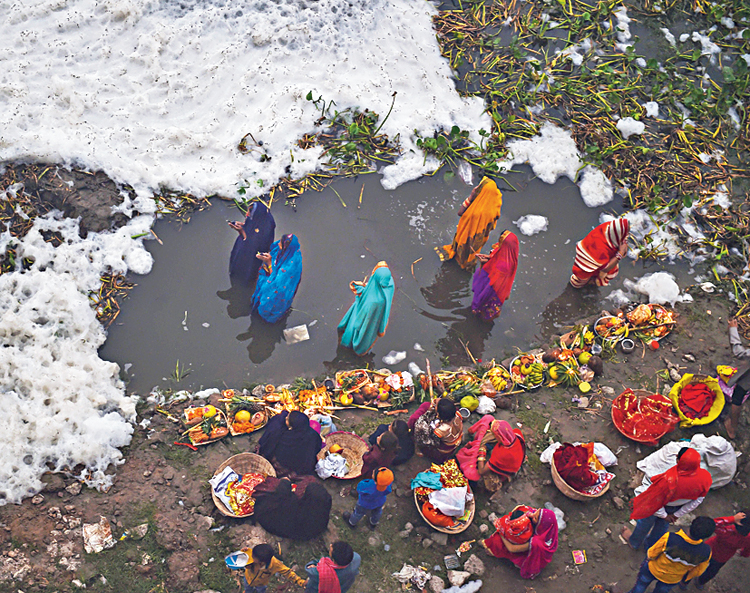 I once watched a small knot of men with matted hair and scanty clothes dabbing their heads and faces from a narrow stagnant ditch that used to meander through the sands opposite what was then Puri’s smart Bengal Nagpur Railway Hotel, noted for its luminous Himalayan ice pudding. The men were surprised when I asked what they were doing for they were convinced the ditch was the sacred ‘Ganga-mai’ in whose holy waters they were sanctifying themselves.

The worrying aspect of Indian life is that despite boastful rhetoric and global posturing, the thinking of large segments of the population hasn’t changed much since that exhibition of blind religiosity. The so-called addendum in the Supreme Court’s Ayodhya judgment set the seal of approval on the process of which Lal Krishna Advani’s rath yatra was both cause and effect. “Faith and belief of the Hindus as depicted by the evidence on record clearly establish that the Hindus belief [sic] that at the birth place of Lord Ram, the Mosque was constructed and three-dome structure is the birth place of Lord Ram,” it says. The vulgarization of politics replaces factual objectivity with subjective speculation. The Bharatiya Janata Party’s theory of countering adversaries with a ‘united Hindu community’ can only mean unity at society’s lowest common denominator in terms of education, intellect and culture. Even more dangerous than the prospect of India becoming a ‘Hindu rashtra’ — as Asaduddin Owaisi, four-time member of the Lok Sabha, fears — is the kind of Hinduism that is preached and the calibre of the people who practise it.

With money replacing caste and class as the social indicator, there is little sign of the ‘enlightened Hindu electorate’ that the sangh parivar’s 1987 Nagpur conference dreamt of. Even Churchill’s bitter dismissal of India’s political leadership may not be sufficiently damning. He spoke in 1931 of leaders who would not eat or drink with the lower orders nor treat them as human beings, who considered themselves contaminated even by their approach, “[a]nd then in a moment they turn round and begin chopping logic with John Stuart Mill, or pleading the rights of man with Jean Jacques Rousseau”. He left out the cowardice and hypocrisy that alone explain why all the BJP big guns present at the vandalism on December 6, 1992, and now gloating over the Supreme Court verdict, are in total denial in court.

Secularism has many meanings and uses, one of the most useful being a bulwark against obscurantism. Intriguingly, orthodox Hindus see no contradiction in relying on the testaments of mleccha travellers who merely noted without endorsing what the natives told them. Perhaps if Karan Singh had persisted with his short-lived Virat Hindu Samaj, there might have been some hope of defining the Hindu identity in modern terms. But such evolution cannot take place in a vacuum. It needs an accompanying social revolution whose absence becomes marked when even Subramanian Swamy, who used to boast that while other Indians had studied at Harvard he had taught there, warns that the Hindutva programme has only just begun. More temples must be reclaimed, more lives brought into line. The idols that were smuggled into the Babri Masjid on the night of December 22-23, 1949 highlight the alternative to secular liberalism that we are left with: a BJP veteran, more discerning than the rest, described them as the kind of figures villagers buy cheap at country melas.

That says something about the 60 persons who carried out that nocturnal operation and the constituency they served. When Narendra Modi’s comments about Ganesh and plastic surgery, Karna as the product of genetic science and Rama, the world’s first aeroplane pilot, appeared on the internet, some sympathetic souls sought to invest them with strategic calculation. ‘He’s just telling the idiot masses that voted him in what they want to hear, like every successful politician in any democracy’ was one response. ‘It’s how you put them at ease while you plunder national resources right in front of their eyes.’ Another telling comment read, ‘The huge majority of the vast population of India are uneducated, superstitious and very religious. I think he is being smarter than he is given credit for — he’s giving his people pride in their country and history.’ Ganesh also prompted an irreverent crack; ‘What about those ancient Egyptian plastic surgeons grafting jackal and falcon heads onto people left, right and centre? Surely they got there first!’

It is possible that Modi wasn’t just pandering to the ‘idiot masses’ and that he himself believes in the claims he made about the capabilities of ancient Hindus. Some think it’s significant that he hasn’t aired those views since. They cite it as a tribute to his intelligence and discretion and his ability to learn as he goes along. It’s pointed out that today’s public utterances are couched in unexceptionally statesmanlike terms. Admirers saw last Saturday’s linking of the fall of the Berlin Wall, the Kartarpur corridor and the Ayodhya judgment as a masterpiece of sagacity. But oral sophistication need not mean any change of basic position. “Speech was given to man to conceal his thoughts”, to quote Talleyrand.

How the prime minister’s rank and file followers interpret him sets the tone. It would be unfair to say like master like man when the master is so enigmatic and the men so dense. The theories that Dilip Ghosh, West Bengal’s BJP chief, spouted about gold making an Indian cow’s milk yellowish and the artery in the animal’s hump spawning gold in sunlight must be his own invention. In fact, a gram panchayat pradhan recommends the Nobel Prize for Ghosh’s inventiveness. But fanciful claims may not damage the party’s prospects in West Bengal. Such is public credulity that while the pradhan complains of greedy villagers hoping to trade their cows for gold, one cow-owner has already approached a finance company for a loan. Sangh parivar activists can always rustle up a lynching if interest in communal politics seems to be flagging.

It often seems as if the level of public perception hasn’t risen much since there was a stir among the servants in Mandeville Gardens (then only bungalows) because an English neighbour’s mali had prophesied a rupee would have 20 annas. On my demanding evidence, the mali produced a newspaper whose front-page advertisement announced that a particular brand of car tyre gave 20 annas value to the rupee. At the other end of the scale, P.N. Oak, the founder of the Institute for Rewriting Indian History and “a ‘historian’ much respected by the Sangh Parivar” according to Tapan Raychaudhuri, claimed the Taj Mahal was really “Tejo Mahalaya”, a temple to Shiva. The Archaeological Survey of India’s certificate that there is no evidence of the Taj ever housing a temple may not spare it the Babri Masjid’s fate if ‘faith and belief’ are the main determinants.

‘Faith and belief’ also accounted for acceptance of the virgin birth of Jesus Christ until education and prosperity ushered in a social evolution that enabled enlightened Christians to set the dogma in a historical context. There seems to be no such relief in India: post-facto legitimization can vindicate and deeply bless all manner of acts that a society bound by secular law would consider outrageous. All this mocks the boast of the world’s largest democracy. Numbers make for representative government of sorts. Democracy demands quality and integrity beyond both the beguiling folklore of Ayodhya and the free-for-all of money and muscle power into which Maharashtra has been plunged.