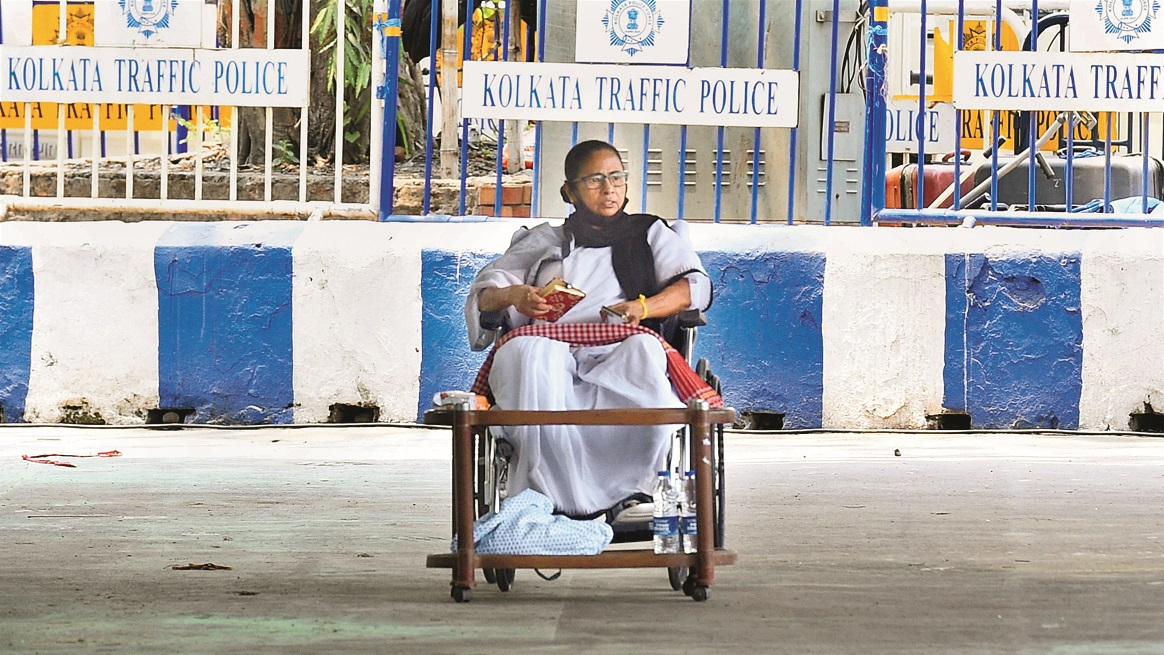 West Bengal Chief Minister Mamata Banerjee, sitting on a wheel-chair, stages a protest after EC imposed a 24-hour campaigning ban on the TMC leader, in front of the Gandhi Statue in Kolkata, Tuesday, April 13, 2021.
PTI
Saba Naqvi   |   Published 05.05.21, 12:11 AM

The passion and conviction were all too visible in Mamata Banerjee’s first words to the media after the magnificent win registered by her party in West Bengal. She would be going to a Constitution bench, she said, because “we have faced the horrors of Election Commission and if we tolerate whatever they have done in Bengal, then in India there will be no democracy.” She invited other political parties to join her petition to the Supreme Court and said that Bengal has saved India today.

So are we getting ahead of ourselves by asking if Mamata Banerjee can save India tomorrow in a national coalition against the Bharatiya Janata Party? She does, after all, have the temperament for a protracted fight and has just triumphed in the most epic of battles, with not just politics but also institutions ranged against her. Other regional leaders won too, such as the Dravida Munnetra Kazhagam’s M.K. Stalin in Tamil Nadu and Pinarayi Vijayan in Kerala, as much a regional satrap as a Left worker. But none had the entire might of the BJP and Central agencies ranged against them. It is, therefore, the Bengal mandate that has really shattered the illusion of invincibility around the Narendra Modi regime two years into his second term as prime minister.

The Bengal victory is all the more substantive as it was not just against an irrational burst of BJP energy in the last two months of campaigning. The national party was playing the long game in Bengal and had framed policies with the state elections in mind. The Citizenship (Amendment) Act, which was passed by Parliament in December 2019, was always targeted at Bengal that is believed to have the largest population of Hindus tracing their roots to Bangladesh (the Act fast-tracks their citizenship while blocking that of Muslims). The CAA would lead to nationwide trauma: protests and, eventually, riots in Delhi in February 2020. The Matua community, the largest group of Hindu migrants from Bangladesh, have indeed supported the national party in these polls although ironically, after creating so much bad blood, the Centre is yet to frame the rules of the CAA that are required to make it operational — a display of the cynicism with which Hindutva agendas are given a dry run.

The West Bengal chief minister has often asked the Opposition to unite, but the question remains whether she would be willing to step out of her turf and wage a national battle. The last chief minister to do so was Narendra Modi, who had also won three terms in Gujarat. The difference was that he had a national party as a vehicle for his ambitions. Mamata Banerjee does not and were this idea to ever have wings, she would have to work with both the Congress and the regional forces. The apparent reluctance of the Gandhis to hold office could be a factor that does not make this an impossible idea.

There has already been editorial commentary about the power of regional satraps and the question has been asked if disparate forces could take on an entrenched national player. It can happen, but only if the Congress is on board because in spite of the defeats in these polls, the party still has bases across the country. Because of its failure to win Kerala and Assam, there is likely to be some implosions in the Congress but if the past is an indicator of the future, then after the hurly-burly is done, the Gandhis will still be at the helm of affairs.

The good news is that although Rahul Gandhi has shown none of the street-fighting grit that makes Mamata Banerjee so exceptional at this moment in contemporary history, he has taken wise and far-sighted positions on the coronavirus epidemic that currently rages through the land. At a time of acute oxygen shortages in the national capital, Priyanka Gandhi has been personally overseeing a youth Congress team delivering oxygen cylinders to homes, hospitals and even embassy compounds, small gestures that do show that the heart is in the right place.

But hardheaded political acumen would require the Congress to recast state strategies and not contest against traditional regional players as it did in Bengal, eventually getting out for duck. Adhir Ranjan Chowdhury, the leader of the Congress in the Lok Sabha, also oversaw its Bengal strategy and often speaks of Mamata Banerjee with disrespectful phraseology. Should the Congress be serious in its intent to take on Narendra Modi in 2024, it would have to dispense with certain fixtures in its state units and look at the larger picture. The next round of state polls will take place in early 2022, first in Punjab, where the BJP no longer remains a serious contender after the split with the Shiromani Akali Dal over the farm laws, and then in Uttar Pradesh, hit by Covid-19 spreading into the hinterland but also missing a strong Opposition.

Mamata Banerjee has been part of two coalitions in the past, the National Democratic Alliance of Atal Bihari Vajpayee when she was not in power in Bengal and the United Progressive Alliance, eventually leaving UPA II led by Manmohan Singh in 2012 over foreign direct investment in the retail sector. Unlike the Bahujan Samaj Party chief, Mayawati, or the late J. Jayalalithaa, both former women chief ministers, the Bengal leader is not unapproachable. She has excellent relations with Sonia Gandhi and with state leaders across the country. Of importance would also be her equation with Sharad Pawar, the Nationalist Congress Party supremo, who is considered a smart practitioner of statecraft and is credited with being behind the design of the regime that now rules Maharashtra. Both Mamata Banerjee and Pawar are former Congress members who would go on to create significant regional parties. The UPA is currently almost defunct as a forum and Sonia Gandhi is the chairman; the game would indeed be afoot again were the national party and regional players to reach out and make the Bengal chief minister chairperson of the UPA.

Mamata Banerjee takes risks. There is something beautifully human about her defeat in Nandigram. She left a safe seat for a tougher one when she was, in fact, the TMC face for every seat in Bengal. She was injured both physically and metaphorically in Nandigram, but as does happen in protracted battles, the hero gets wounded, copes with the pain and keeps charging till the enemy is vanquished. The eventual defeat from Nandigram only makes her human and, therefore, more relatable in the age of carefully manufactured leadership.

At a time when many state leaders even from opposing parties are careful about what they say about Narendra Modi and Amit Shah, it’s a breath of fresh air to see Mamata Banerjee speak her mind fearlessly and honestly from her point of view. Under the homely exterior of a spontaneous leader in a simple cotton sari is an individual with nerves of steel. That’s what is needed to fight the cult of the Indian prime minister, propped up by big money, manpower and a pliable national media. There is some distance between 2021 and 2024, when the next general election takes place; can the Opposition start devising a strategy? There are chinks in the BJP’s armour and the national chemistry is changing. Mamata Banerjee has shown India that no victory is impossible.