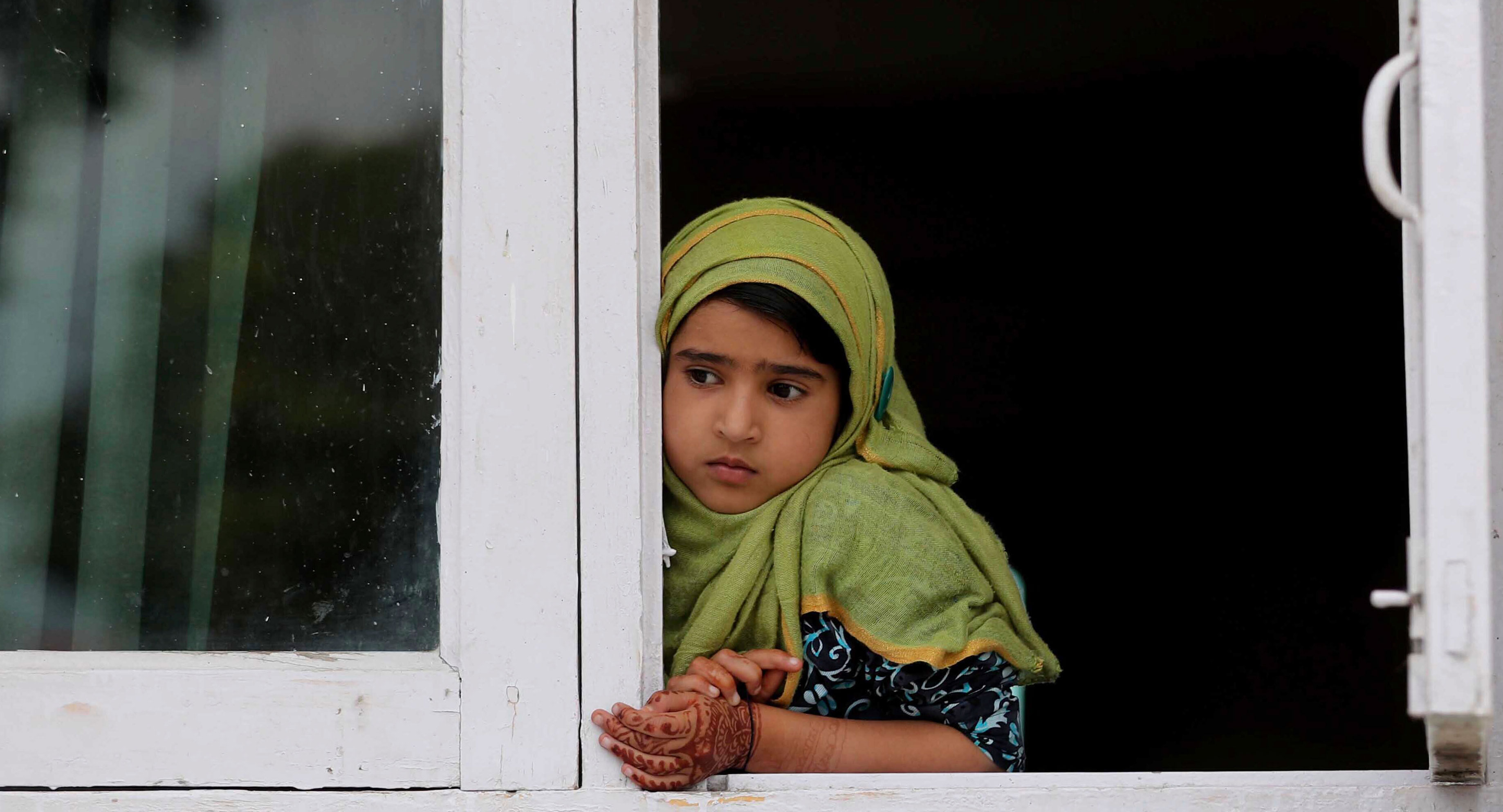 A Kashmiri child watches a protest in Srinagar on August 30, 2019. The sexual fantasies that have been unleashed around Kashmir — the top Google searches in India immediately after August 5 were ‘marry Kashmir girl’ and ‘Kashmiri girls’ — are not innocent. They are misogynistic.
(AP)
Nissim Mannathukkaren   |   Published 02.09.19, 07:48 PM

A nation is not conquered until the hearts of its women are on the ground. Only then is it done, no matter how brave its warriors nor how strong its weapons — A saying among the Cheyenne, an indigenous people in America.

Since the abrogation of Article 370, there has been much naked gloating about Kashmir’s ‘annexation’ in the rest of the nation. Even more disturbing has been the explosion of misogynistic jokes about Kashmiri women on Indian social media.

The entire discussion around Kashmir has reduced it to a political and economic issue. In doing so, what we miss is that nation states are violent masculine projects, and that they are played out on the bodies of women. In this way, they mimic the logic of colonialism, marked by patriarchy and sexual violence. This is ironic because nation states like India have been founded by defeating colonialism.

The sexual fantasies that have been unleashed around Kashmir —the top Google searches in India immediately after August 5 were ‘marry Kashmir girl’ and ‘Kashmiri girls’ — are thus not innocent. They are misogynistic. But they are also deeply tied to the political arena of nation-state building. The flurry of videos on TikTok and Facebook by men declaring that they will marry Kashmiri women — something that a Bharatiya Janata Party lawmaker openly asked his party workers to do — or buy property in Kashmir, are also linked to the larger ‘nationalistic’ goal of changing the demographics of Muslim-majority Kashmir.

Of course, the women are not humans, with voice and agency, but are reduced to the status of material property. It does not matter what Kashmiri women think about marrying all these men. This is what is reflected in the BJP lawmaker’s supreme confidence and the resounding applause with which his exhortation was met with.

Gender activists have condemned the misogyny and the chauvinism in such statements. But this is not all that there is to it. As the scholar, Neferti X.M. Tadiar, argues, “[T]he economies and political relations of nations are libidinally configured, that is, they are grasped and effected in terms of sexuality.” Unless this is grasped, the struggle for democratizing India’s nation state would be severely hobbled.

The increasingly violent and masculine imagination of the Indian nationhood is ironic not only because M.K. Gandhi — the person who refused to contest British colonialism on its violent, masculine terms — is the Father of the Nation but also because the Indian nation from its initial conceptualizations had seen itself in female terms, especially as the Mother Goddess.

The historian, Tanika Sarkar, has shown that even when the British Empire, self-professedly virile and manly, mocked, for example, the Bengalis as effeminate and weak, Bengali nationalism was not ashamed to counter it by revelling in the worship of the female principle.

Of course, there was always a yawning gap between seeing the nation in the image of the woman and the mother and the actual status of women and mothers in society. Yet, we have come a long way under a right-wing nationalist imagination in eliminating every vestige of weakness, considered as effeminate, from the conception of nationhood. Hence the widespread approbation for the government for avenging Pulwama, and for the ‘strong’ action undertaken in disciplining the recalcitrant Kashmiris.

Bharat Mata of the present is essentially a (Hindu) male imagination, of men, by men, and for men. Hindu men emerge as protectors and saviours of even Muslim women. The triumphant discourse surrounding the abolition of triple talaq and the majoritarian male fantasies about Kashmiri women are simply an extension of this.

Yet, we cannot trivialize these fantasies, for the consequences of nationalism and State-building for ‘others’ who do not fit neatly into them are real and terrible. That is why the entire focus has only been on how Kashmiris have been unjustly getting special privileges at the cost of the rest of India, and not on what it means to live in the most militarized zone in the world.

Women in particular are affected, for they are subjected to not only the patriarchy of the nation state but also the patriarchy of their own community. It is important to remember here that the women of the Kashmiri villages of Kunan and Poshpora, raped allegedly by the armed forces, are yet to receive justice even after 28 years of the crime. Human right violations and extra-judicial killings have occurred under the cover of the Armed Forces (Special Powers) Act not only in Kashmir but also in other theatres of recalcitrance like Manipur.

Justice is also yet to be delivered in the brutal rape and fake encounter killing of Thangjam Manorama despite the order of an interim compensation by the Supreme Court. The killing had led to an unprecedented protest by Manipuri women in the nude. In 2014, a judicial panel in Manipur noted that “Crimes against women, more particularly relating to sexual harassment committed by armed forces, are now increasing in some states like ours.”

It is time to recognize that sexuality and gender power, often taking violent forms, are as much a part of nationalism and nation-state building as their political and economic aspects. In the Hindutva nationalist imagination, while the Kashmiri Muslim man is the ‘Other’, Kashmiri Muslim women become objects of fantasy.

Kashmiri women and the state of the union