What matters is the search for knowledge, not confined to ancient Hindu scriptures but wherever it is found in the world 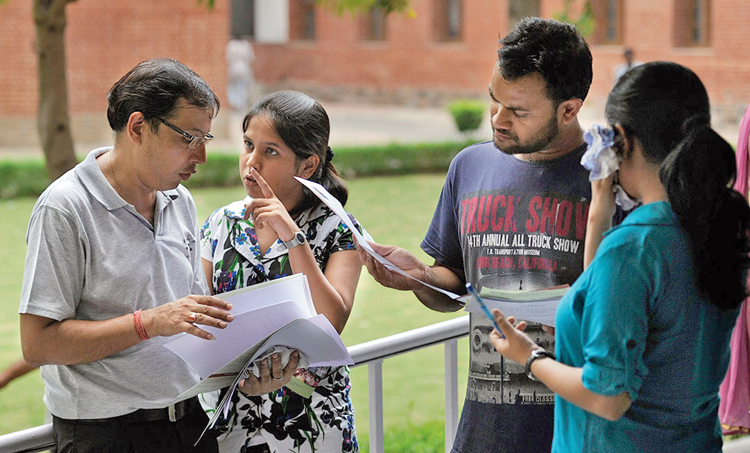 We have a pretty undistinguished university system, but it still fails to ruin the brains of some bright Indians, who then escape to good Western universities
(File photo)
Ashok V. Desai   |     |   Published 02.12.19, 09:05 PM

The awarding of the Nobel Prize to three poverty researchers has made waves in India, largely because Abhijit V. Banerjee happens to be of Indian origin. Esther Duflo — one of the most riveting speakers I have heard — has received some media attention as his wife. Michael Kremer, the third economist who shared the prize, has been ignored. Sendhil Mullainathan did not even get a share of the prize, although he has been an important member of the team that developed the technology of randomized control trials as an instrument of research.

All four are participative researchers; most of their papers are joint papers, and many involve a large number of co-authors, which is the style of laboratory-based scientific research. The normal pattern when I studied economics 60 years ago was that great universities gave a first-class education to excellent students, selected the best amongst them to do research under the best teachers, and gave academic positions to the best of them which enabled them to work and live comfortably on the income they got. They read or experimented and wrote papers on their own; research was a personal activity. The financing model was slightly different in the United States of America and the United Kingdom; apart from state universities, the US had many privately- funded universities. But the result was the same: a small number of universities with self-renewing faculties that were at the leading edge of knowledge. The change that has occurred since then consists of opportunistic alliances that academics now form to work in new areas. It confronts Nobel Prize selectors with a difficult choice — they can hardly give a single prize to a dozen researchers; they would not know how to divide it amongst them. But they are inching towards a solution; the award to three researchers is a move in that direction.

One advantage of collaborative research is that whilst the researchers work on the same subject, their brains are very different, and each of them is pulled in a different direction by his/her interests and passions. So when they get together, they get into spirited debates, often bordering on disputes; the only thing they agree on is how to resolve the disputes — by rational discourse and relevant evidence.

What they can do is constrained by money. Most of them work in universities and research institutions funded by governments, which put pressure on them to work in ‘national interest’ — to work on locally relevant subjects, publish in journals within the country, and work with their fellow nationals. Some governments, like our own, are more parochial than others. Language also often limits scientific communities to one or a small number of countries. Although the best researchers are attracted to the enormous American academic market and learn to read and write in English, there is still a large number that is nationally confined. Many Indian researchers are constrained because of the government’s preferences and practices; they have created a by-and-large second-rate academic environment. It is because of this that the best Indian scholars try to escape from India.

The Americans have recently developed some doubts about their open system because of the Chinese, who send their best students to the US and then pull them back into China; they have thus built up an academic system of high quality at least in parts, as can be seen from China’s technological achievements. Many Americans like to think that the Chinese are expert copiers of American technology. No one knows how far Chinese technological achievements are indigenous to their own academic system, because non-Chinese people do not bother to learn Chinese.

The Japanese reached the peaks of technology 40 years ago by the same means: they learnt English and copied Western technology, and there were no reverse flows since Westerners did not learn Japanese. But concern about Japanese copying has more or less disappeared, presumably because the Japanese are no longer increasing their share of world exports; their competitiveness seems to have peaked. Indians also went abroad to study and excelled in information technology, but they never threatened American dominance because their domestic academic system continued to be poor — with some exceptions in IITs and IIMs, whose researchers maintained relationships with good institutions abroad.

The university-based research system is financed by the government in most countries; there is a government-owned and financed research system in India — one of the most unproductive in the world. Raghunath Anant Mashelkar tried to reform it, but he failed because of internal resistance; now he earns his fees as director of Reliance, whose R&D record is not all that distinguished. We have a curious paradox: we have a pretty undistinguished university system, but it still fails to ruin the brains of some bright Indians, who then escape to good Western universities.

This arrangement may be threatened if Donald Trump applies his narrow parochialism to American universities. As I said earlier, the best American universities are privately funded and will not bend easily to his will; but he has the visa system to manipulate. He has already started doing it with respect to Indian IT researchers. As things look, the American people may give him another four years of presidency; in that case there is no end to the damage he can do.

We thus need to build a first-class indigenous university system. But our present government seems determined to create just the opposite — one built on knowledge it believes our ancient saints created, such as the art of flying without wings. Ignorance is not a handicap; we all are in our own state of ignorance. What matters is the search for knowledge, not confined to ancient Hindu scriptures but wherever it is found in the world. To pursue the search, we need to keep our intellectual doors permanently and unconditionally open; there is no point in reinventing knowledge already discovered somewhere. And the doors must be open not only to knowledge in material forms such as literature and machinery; they must also be open to the brains that house and develop that knowledge. In other words, our universities must be open to scholars and students from the entire world, with absolutely no visa-based or other interference from the government.

Even if it sees the point and distances itself, it is difficult to imagine that the government will invest in such an open system. But such a system is in national interest; I wish our business and industry leaders would see this, and take the initiative. They do see the point of research and development, and invest modestly in it. What they need to do is to finance a much broader knowledge creation system, closely integrated with similar systems abroad. It is not enough for Reliance to fund a chair in a university where Mukesh Ambani studied; major businesses must come together and make a plan to create an educational system of world standard. It may not serve our entire youth; the cost may be beyond our reach. But even if it is smaller, it must be based entirely on merit and achievement; it must not only have great libraries and laboratories, but the world’s best minds doing what they know best.