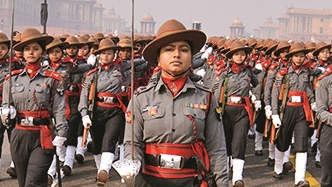 In February this year, the Supreme Court granted permanent commission to women officers of the Indian army.
File picture
The Editorial Board   |     |   Published 27.10.20, 12:55 AM

In February this year, the Supreme Court granted permanent commission to women officers of the Indian army. The initial deadline to implement this verdict — May 17, 2020 — is long gone, but the army is said to be dragging its feet over bureaucratic formalities on the matter. This procrastination may have prompted the Supreme Court to express its displeasure recently. The conduct of the executive has not been flawless either. Although the Centre gave its nod to permanent commission for women in all 10 branches of the armed forces in which they were serving in March 2019, this offer was not to be implemented retrospectively. Consequently, the fate of hundreds of officers still hangs in the balance. The court has also expressed its indignation on the kind of obstacles that seem to have been put on the path of empowerment and equality. Women officers aged 30-50 years with 10 to over 20 years of service experience are being made to compete with gentleman officers aged between 25-30 years for permanent commission. The issue here is one of parity in rank and honour. Why would a senior woman officer holding the rank of lieutenant-colonel have to learn the art of tactical strategy and train with a male officer of subordinate rank? Without a well-thought-out and sensitive policy that accommodates the special challenges faced by serving women officers close to retirement, the pledge of reform in the army would remain illusory. Why, for instance, can the State decree on permanent commission not be applicable to all women officers? Ageism in Indian establishments seems to intensify when it comes to women.

It is a pity that the judiciary had to intervene yet again to set matters right. But this intervention should also be an occasion to highlight some of the skewed traits within the armed forces. Women form a minuscule 3.29 per cent of the Indian army personnel compared to an average of 11 per cent among Nato countries. There is no doubt that the Indian army needs to be more accommodating. The issue, unsurprisingly, is of a regressive sensibility. At a time when the United States of America and Israel have given deserving women combat duty, in India the top court has had to nudge both the army and the executive to adhere to the principle of fairness. Women’s ability is not the concern here. The deliberate obfuscation of merit is.