Advertisement
Home / Opinion / In Faith: Editorial on Mamata's rally to thank Unesco for placing Durga Puja on its list

In Faith: Editorial on Mamata's rally to thank Unesco for placing Durga Puja on its list 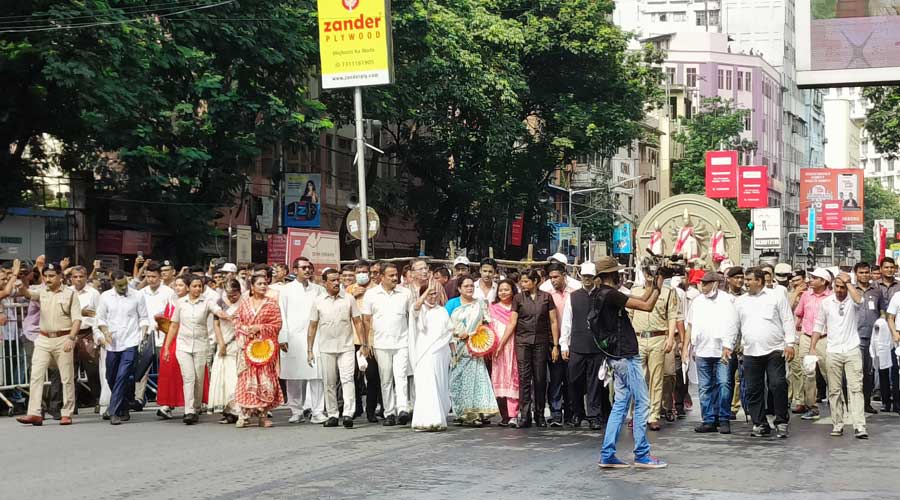 The political lens which is now the sole means of perception presented this as a Trinamul Congress chief minister leading a rally with other TMC ministers in tow.
File Picture
The Editorial Board   |   Published 05.09.22, 03:49 AM

Politics can be of many kinds. There is one that is wider, greater and more generous than party politics. That was on view when the chief minister of West Bengal, Mamata Banerjee, led a rally in Calcutta to thank Unesco for placing Durga Puja on its list of intangible cultural heritage representations. Ms Banerjee led the rally as chief minister of the state which nurtures this heritage, but the political lens which is now the sole means of perception presented this as a Trinamul Congress chief minister leading a rally with other TMC ministers in tow. A Bharatiya Janata Party leader saw this as Ms Banerjee’s attempt to appropriate the ‘credit’ for the listing, when plaudits were due to the Sangeet Natak Akademi, which furnished Unesco with a dossier prepared by an art historian from Calcutta. Sangeet Natak Akademi was under the Narendra Modi government, the BJP leader took care to underline, suggesting that all good things that come to India belong to Mr Modi and the BJP. While the deity became subject to the tug-of-war between the TMC and the BJP, a BJP leader in the state added that the rally was a strategy to distract attention from the corruption cases now dogging TMC leaders.

What rendered the ugliness of party politics inconsequential were the people. Thousands joined the rally, proud, grateful and celebratory. Instead of allowing religion to be divisive, as expected in India today, they showed how a religious festival can unite everyone — from all faiths, castes and professions. Everyone participates in the Durga Puja; they feel a sense of belonging. What was expressed was the ownership of a shared culture. Unesco representatives appreciated the extraordinary outpouring of gratitude and, more important, acknowledged the importance of togetherness in diversity in today’s world. This was a spectacle of the greater politics of inclusivity, presented spontaneously by people across communities. By directing credit towards the Modi government, the BJP leaders seemed to have missed the point of the rally. It overturned all that the Modi government has come to stand for — the cultivation of hatred and condemnation of differences. Rather, if there had been some secret insecurity in the assertion of the Modi government’s contribution to Bengal’s triumph, that should have multiplied many times at the different class of politics on display.