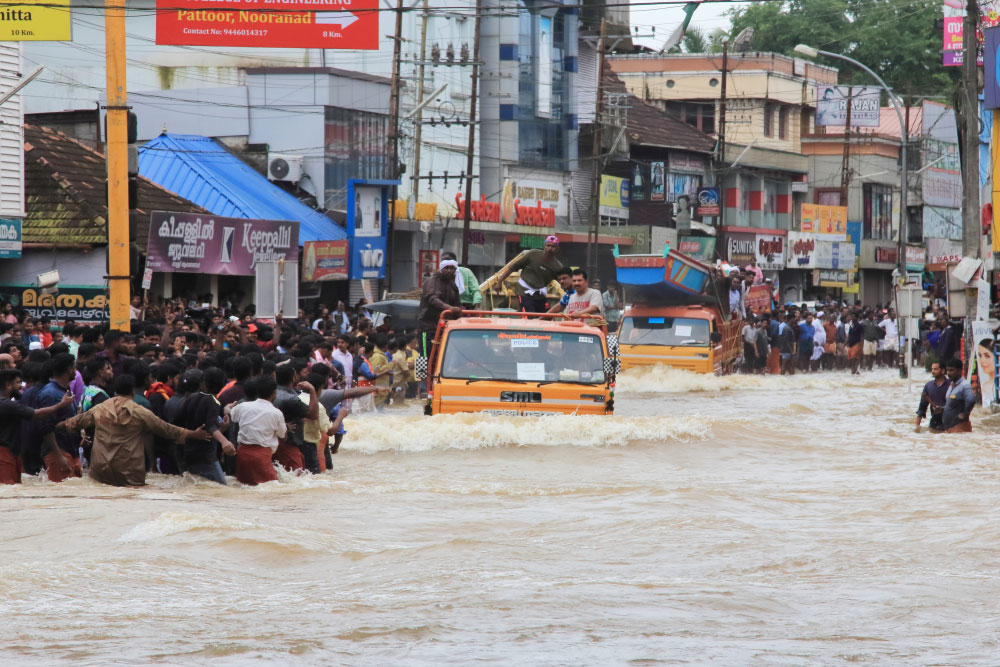 People gather to rescue affected people from a flooded area in Pathanamthitta, Kerala, in August 2018, when the state suffered catastrophic floods. Local administrations should carry out development activities by considering the vulnerability quotient attached to their region
(Shutterstock)
Jitin Yadav   |   Published 18.06.19, 05:10 AM

I was undergoing my district training as an IAS probationer in Uttar Dinajpur, a district in West Bengal, which witnessed its worst-ever floods in August 2017. The distraught people did not quite know what to do and how to cope with the disaster. The administration tried its best, but it has its limitations with respect to human resources and the availability of infrastructure. Eventually, it was the people who faced the brunt of the disaster, which took the district back by 15-20 years in terms of development.

Kerala witnessed a catastrophic flood in August 2018. Civil servants, civil society organizations and trained forces tried their best to mitigate the impact but time and again we have failed to cope with natural disasters. Our approaches have always been reactive instead of being proactive.

The National Disaster Management Act came out in 2005. It talks of having a National Disaster Management Authority at the national level with the prime minister as the chairman. The SDMAs and the DDMAs were constituted at the state and district levels respectively. Disaster management plans work in isolation and are rarely linked to the ongoing development activities in the districts. We construct, floods destroy. It is high time we inculcate flood-risk assessment in our development planning activities.

Costs attached to flood management, rehabilitation and restoration are rising exponentially each year. However, Flood Plain Zoning is an efficient way of reducing the impact of disasters. It can be used in disaster preparedness strategies and should be incorporated into government policies to mitigate the effects of floods. FPZ has the ability to reduce the damages and the costs associated with such disasters. The vulnerable areas in the districts can be identified and mapped as per past analysis of floods into extremely (red) and partially (blue) affected zones.

Disaster preparedness and its management can become efficient to a large extent if these zones are focused upon. The risk management and impact of floods can be reduced if the targeting is done on a zone-wise basis. Rescue and relief operations can be more efficient if we have location availability. The extent of these operations can then be determined for the future.

Mapping of alternative routes can be done if a certain area is blocked. Distribution of shelter homes and relief centres should correspond to the zoning of regions. A shelter home or relief centre’s location within the extremely or partially affected area would increase the vulnerability of people there and can have disastrous effects on these populations.

Land use patterns can be developed using these zones if farmers are aware of the region’s vulnerability in a broader way. Crops and occupations can also be decided on the basis of the nature of floods and their effects in a region.

The district administration and the state government should carry out development activities in a specific district by considering the vulnerability quotient attached to these zones/regions. For instance, those residing in kutcha houses in extremely or partially affected regions would be at greater risk. Priority should hence be given to them in the case of housing schemes like the Pradhan Mantri Awas Yojana.

Most important, people should be aware of such a concession. This awareness could well decide the extent to which the vulnerability and the emergency response system would work as per the priority of zones. The response time should be the least for the people living in the extremely affected regions.

Last but not the least, such an approach would reduce the financial burden of floods. If the danger zones are identified and taken care of during development activities, then the strategy could reduce the devastation that floods cause to the exchequer and the people at large. Otherwise, irrespective of how many stages of development we cross, such calamities will take us back in time, again and again.

How India can raise the bar in responding to disasters