Every government has enormous power to harm the people

However big a majority a government is voted in with, it does not come with a right to make mistakes 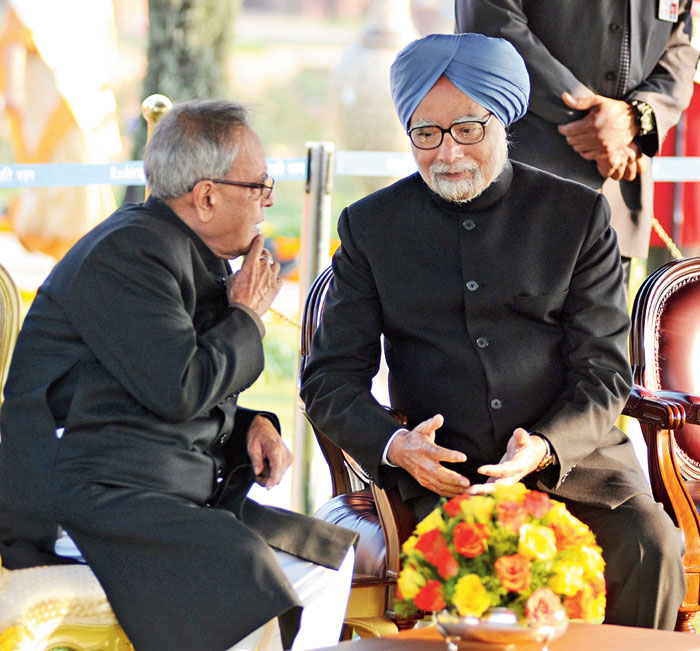 Pranab Mukherjee sabotaged the economic policies Manmohan Singh wanted to pursue — whether because he was an old-style Congress socialist, or because he resented the elevation to prime ministership of his junior, Manmohan Singh, whom he had made RBI governor in the 1980s
Telegraph file picture
Ashok V. Desai   |     |   Published 04.11.19, 07:36 PM

Pranab Mukherjee and Manmohan Singh were loyal servants of the Congress for many years. I had a close view of the latter and a rather distant view of the former during the two years I spent as chief consultant in the finance ministry. Mukherjee was deputy chairman of the Planning Commission, and planning was virtually dead at that time: the economic crisis required day-to-day handling that Manmohan Singh did because of his office, which controlled fiscal, monetary and external economic policy. My recollection is limited to Pranab Mukherjee’s pronounced tenor voice, rather like Montek Singh Ahluwalia’s. He and Manmohan Singh were mutually well behaved in the few meetings where I saw them together, so I had no reason to doubt that their relationship was anything but cordial.

I was recently jolted out of my ignorance by Puja Mehra’s detailed description of Mukherjee and Singh’s pronounced cold war in her book, The Lost Decade 2008-18. Both served the Congress for decades — Singh continues to do so even now. Both rose to the top during the Congress’s halcyon days. In the British system we inherited, the chief of government is the prime minister, and he who appoints him, so to say, is the president, our equivalent of the British monarch. The president lives in luxury in the enormous palace once known as Viceregal Lodge. It has enough rooms for him to sleep in a different one every night of the year as long as he takes a 10-day trip away.

There was no prime minister during British days, so when Nehru arrived to head the first government of independent India, he was homeless. He took over Flagstaff House, the mansion of the commander-in-chief; though not nearly so sprawling as Viceregal Lodge, it had beautiful rooms spread along balconies which looked out on to a lovely garden. But when he died, the Congress turned Flagstaff House into a museum, which it continues to be even under Bharatiya Janata Party rule, and Nehru’s descendant prime minister, Indira Gandhi, took over the entire Race Course Road, thus putting an end to the wonderful British sport of watching horses gallop and betting on winners and just-losers. She expelled the horses, but she could not eliminate the punters. They continued to meet at the race course, listen to commentary on races in Mumbai, Calcutta and Chennai and bet on them. Once I was passing the race course and heard excited crowds cheering on the horses. So I went in and sat down in the pavilion, waiting for the horses to run by me. None did; soon, the commentary too stopped. That is when I learnt the secret rendezvous of national punters. But before long, the prime minister, too, found it out, and stopped the betting conclaves.

When Narendra Modi won, he could not bear the thought of working at the desk or sleeping on the bed of those secular Congress prime ministers. There were rumours that he would move to a new headquarters. There is an enormous complex being built not too far away from the race course, and he may eventually move there. But for now, he too has appropriated Race Course Road; instead of No. 7, however, he lives in No. 5.

Anyway, Manmohan Singh was the choice of Sonia Gandhi for prime ministership, and Pranab Mukherjee had to be content with various other ministries. So what he did was play pranks to annoy the prime minister. The purchase of Hutchison Essar by Vodafone International Holdings took place abroad and was therefore not taxable under Indian law as it stood then; Mukherjee made a retrospective amendment to make it taxable. P. Chidambaram, his predecessor in the finance ministry, had made all the preparations for the goods and services tax; Mukherjee failed to get it through. He dithered on bank consolidation; the interminable non-performing assets crisis is due to corporate loans given by government banks when Mukherjee was finance minister. He went on running large fiscal deficits long after the 2008 crisis had been overcome. In sum, he sabotaged the economic policies Manmohan Singh wanted to pursue — whether because he was an old-style Congress socialist, or because he resented the elevation to prime ministership of his junior, Manmohan Singh, whom he had made governor of the Reserve Bank of India in the 1980s when he was finance minister. That was the misfortune of the Congress government; it lost power in 2014.

Demonetization was an ill-conceived mess, so it is not surprising that no one has taken responsibility for it. But its announcement speaks for itself. On the evening of November 8, 2016, the prime minister made an unannounced speech on television; he announced demonetization of high-value notes on three grounds: Pakistan printed Indian notes to finance the terrorists it sent to India, bribes were paid in cash, and smugglers (hawala traders) used cash. But there were also some honest Indians; how was their cash to be protected? They could go and convert it into new notes in banks — except that banks were ordered to be closed the next day, and they had not been warned of demonetization, so when they opened, they did not have enough cash. Their ATMs stopped working. And how much loss did the holders of black money suffer from the colossal punishment of cash holders? Only notes worth Rs 107 billion were not converted out of the total Rs 15 trillion issued — 0.7 per cent — they may have been black money, or their holders were not able to rush to banks in time.

Urjit Patel, the then RBI governor, never said a word about demonetization. But the crash of the banking system spoke for him — that the RBI had no clue about demonetization. He would never have wanted to be a part of the operation if he had had the choice. And he, like his predecessor, was got rid of by the Delhi government.

These were not the only errors of the present government; the introduction of the GST dragged out, and eventually landed us with a messy, complicated tax and collection structure. Farmers’ suicides and agitations show a serious problem, but the government has not even begun to resolve it.

These are some of the stories related by Puja Mehra in her highly readable book. It reads like journalism; but there is serious work behind it, as proved by over 700 endnotes. Maybe she will receive a spicy reply from the chief economic adviser in his next economic survey; more likely, it will go unanswered. A reply would do nothing to ameliorate the sufferings that the people have gone through; rather than think of a reply, one wishes the government learnt not to make such heartless mistakes. Every government has enormous power to harm people; that is why our government has had elaborate mechanisms to prevent harm. They have become moribund under this government; they need to be revived. Democracy is supposed to punish bad governments by voting them out. But that takes too long; however big a majority a government is voted in with, it does not come with a right to make mistakes.

‘Carry along those who didn’t vote for you’: Pranab Mukherjee