Advertisement
Home / India / ‘Carry along those who didn’t vote for you’: Pranab Mukherjee

‘Carry along those who didn’t vote for you’: Pranab Mukherjee 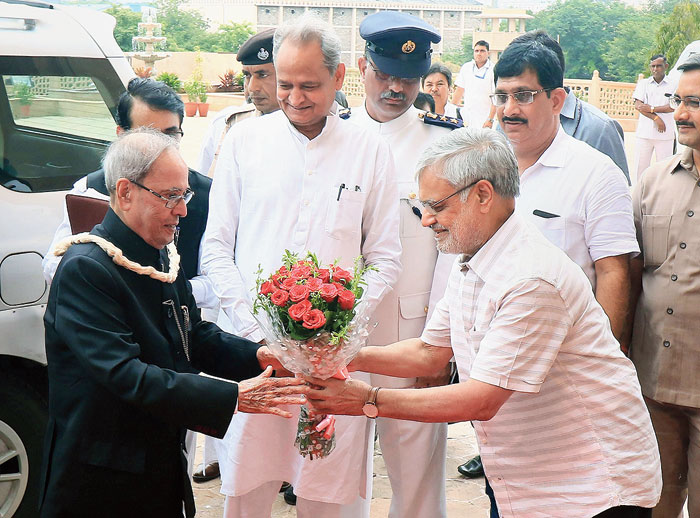 Former President Pranab Mukherjee on Thursday reminded political parties that even if they come to power with a huge mandate, they must keep in mind the large number of people who did not vote for them.

Mukherjee, who was addressing a seminar at the Rajasthan Assembly here, recalled that some Lok Sabha elections had been won by massive majorities, but the vote share for any party had not crossed the 50 per cent mark.

“Surprisingly, there have been massive majorities but not more than half of the Indian voters have given their mandate in favour of a party, not in the past, not in present, never to the Congress, never to any other party, including the BJP,” Mukherjee said.

“The Indian electorate tells the ruling party, I am giving you enough seats to form the government but please remember you do not have our total mandate. That means you have to carry along those who have not voted for you because they are the people of this sovereign democratic republic,” he added.

The former President’s address comes months after the BJP won the Lok Sabha polls, securing 303 seats. Its vote share was about 40 per cent.

He elaborated on the journey and various phases of the development of the parliamentary system in the country, the role of the executive and the judiciary, historic aspects, and the Constitution and its Preamble.

“India’s parliamentary system was neither accidental nor the gift of the British government. It was the contribution of our people, our struggle, movement and our efforts,” he said.

The seminar was organised for current and former members of the Rajasthan Legislative Assembly by the Commonwealth Parliamentary Association’s Rajasthan branch.

CPA Rajasthan president and Assembly Speaker C.P. Joshi said in the general elections held between 1952 and 2009, 50 per cent of the vote share got divided between the two major political parties — the Congress and the BJP.

But in the 2019 Lok Sabha elections, the figure exceeded the 50 per cent mark as both the national parties increased their vote share at the cost of regional parties.

The Speaker said it was a good indication for parliamentary democracy if the vote share of national parties increased and the share of regional parties decreased.

Joshi said there was no country like India which has made remarkable progress through parliamentary democracy.

CPA Rajasthan vice-president and chief minister Ashok Gehlot said the seminar was organised for the first time in the state and was a good learning experience for the legislators.