Nobody can want Bengal to be the new Lynchistan 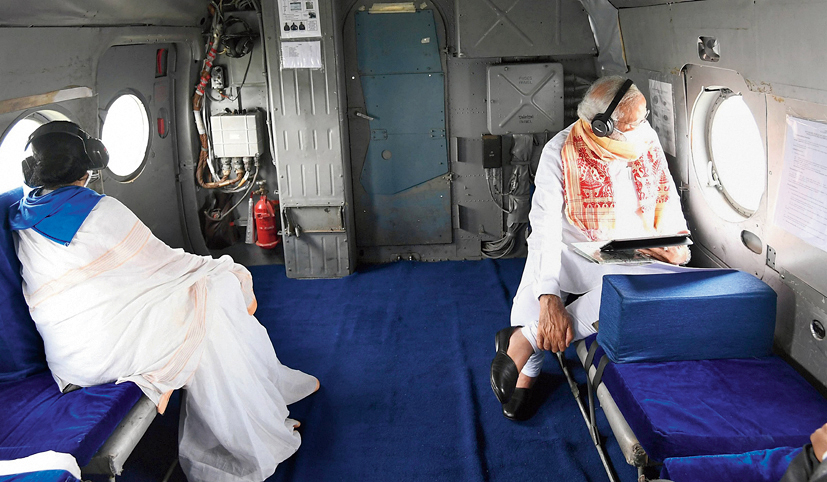 Fearing a surge of Covid-19 infections once buses and local trains start running, Bengal voters are caught between the devil and the deep blue sea. The exchange of letters between Jagdeep Dhankhar and Mamata Banerjee demonstrated that the choice is between a state government that might be caring but has little expertise and less by way of resources and a control freak of a national authority determined to purge the past with an Indian variant of Mao Zedong’s Cultural Revolution.

True, the proprieties were not obviously breached during Narendra Modi’s aerial survey of the Cyclone Amphan damage. But the proof of the pudding will lie in two factors. First, Modi’s willingness to go beyond the routine Rs 1,000 crore he promised and respond constructively to the chief minister’s request for special help for the migrant influx and reminder about the Rs 53,000 crore Bengal claims the Centre owes it “for various social security schemes”. Second, how far the governor takes his vigorous activism, which clearly indicates the appraisal that efforts must be made at all levels to compensate for the local Bharatiya Janata Party’s lacklustre performance. Nobody knew better than E.M.S. Namboodiripad that “whatever the theory regarding the governor in the Constitution, the governor is, in practice, an agent of the Central government, or rather of the party which rules the Centre.”

We have been here before. “New Delhi and the states are plodding on the long road back to the Constitution,” I wrote optimistically in Hong Kong’s Far Eastern Economic Review after the 1967 general election when one could travel by train from Amritsar to Calcutta without touching Congress territory. The optimism was misplaced. Federalism had won a reprieve, not a victory. Even if it had been possible in 1967, there is little chance now of returning to a gentlemanly past when Rajendra Prasad, no great admirer of India’s British heritage, acknowledged that “many things which cannot be written in a Constitution are done by conventions”. Even Vallabhbhai Patel, posthumously shanghaied to become the BJP’s tutelary deity, professed he favoured “the British type of constitution with which we are familiar”. Anglo-Saxon respect for conventions without coercive force is irrelevant now as India faces a return to a harsher version of those pre-1967 dark ages when, as Chakravarti Rajagopalachari put it, governance “was a question of the relationship between the state branches of the Congress party and its central organization”. The Centre exacted obedience and doled out largesse; the states begged and bargained for what they could get.

The players are different this time, more ruthless and less respectable. What cannot be missed, however, is that despite the high-pitched propaganda of the BJP’s richly rewarded spokesmen and the robust backing of businessmen whose expectation of favours recalls the bad old days of the licence-permit raj, the party’s credentials are more than a little tarnished. The much-vaunted ‘Gujarat Model’, flaunted as a miracle of economic growth and justification for BJP triumphalism since 2014, has been exposed as a sham. The Gujarat High Court’s 143-page order is a devastating indictment of the current state government’s mishandling of the Covid-19 crisis. Serious allegations of a racket in fake ventilators and contracts for industrialists with friends in high places demand answers. The record elsewhere is similarly unsavoury, belying the assiduously created impression of pragmatic planning, sound implementation and sturdy integrity.

Bengal at least had the good sense to enlist the army while the Centre fumbled and floundered, unable to solve the problems it faced and yet unwilling to share credit with an organization whose success might expose the weakness of institutions under its political control. While Yogi Adityanath in Uttar Pradesh plays ducks and drakes with labour rights and freedom of movement, which is a basic requirement of national integration, the arrogance that a BJP minister, D.V. Sadananda Gowda, reportedly displayed at Bengaluru airport let everyone know that the party is above the law. Meanwhile, reports about hydroxychloroquine encourage fears that the cure might be worse than the disease.

Administrative shoddiness, already evident in the demonetization saga, was again reflected in the abrupt imposition of the lockdown. It may have satisfied the leadership’s craving for high drama, but exposed the inability to anticipate and prepare for consequences on the ground. Harrowing tales are told of the suffering to which hundreds of thousands of suddenly unemployed workers are still being subjected because bombastic rhetoric is not matched by organizational skills. The Jarrow Marchers, starving British workmen who walked from Northumberland to London in 1936 to seek redress, numbered only about two hundred and covered a much shorter distance: history honours them as martyrs. I wonder if the acute privation under a pitiless sun that our workers are facing, the starvation deaths, deaths from lack of medical attention, monumentally bungled trains, police savagery as well as individual heroism will similarly become part of national lore? Each failure can probably be attributed to the inefficiency of a separate Union department. But, collectively, India’s anguish must be laid at the doors of the Union home ministry. Obviously, Amit Shah’s supposed adroitness is restricted to managing elections.

The real danger of extended BJP domination comes from the roughs and toughs who operate under what looks like party protection. Perhaps they are two sides of the same coin. Perhaps the strategy is to leave the dirty work to obscure outfits like the Antarashtriya Hindu Parishad whose vandalism in Kerala’s Ernakulam district this week repeated a pattern that the sangh parivar had made familiar. If traditions, institutions, places of worship and personalities have to be attacked or the Tablighi Jamaat blamed for the pandemic (ignoring the Centre’s role in sanctioning the event and permitting so many foreigners to attend it), the task of reinventing the past can be left to these Indian equivalents of Mao’s Red Guards. If so, Dhankhar has been chosen not just to play Dharam Vira’s part but to spearhead an epic battle led by the virtually invisible Modi.

Mamata Banerjee may be oblivious of the fact that the challenge she faces is for far more than the control of one state. The mantle that has fallen on her shoulders demands she defend, revive and sustain the near-forgotten idea of India. Whether or not she is conscious of this bigger responsibility, she is possessive enough of her patch and a sufficiently tenacious fighter to know that despite immediate preoccupations, the onward march of the Modi juggernaut must be arrested. Ironically, this comes at a time when her own capital city, labouring under the twin burdens of disease and cyclone, is in danger of retreating to the village it once was with bamboos replacing the 4,000 lost electric posts. The regression is in keeping with the incompetence of a city where BSNL has not bothered to restore all internet and TV connections a week after the cyclone and is quite unapologetic about its incompetence.

Gopal Krishna Gokhale’s compliment to Bengal can also be applied in a less flattering sense. Calcutta Corporation, India’s first significant institution to come under swadeshi management when the Calcutta Municipal Act of 1923 was passed, was soon mocked as ‘Calcutta Corruption’. That had changed to ‘Chorporation’ by the time I began writing. Stories about the ingenious ways in which public funds are embezzled are known well enough. But it bears recalling that after working in the corporation as a journalist and later as secretary to a Congress leader, and having watched the advance of self-government in 1935, 1937 and 1947, Nirad C. Chaudhuri concluded that independent India “would become Calcutta Corporation writ large”.

There’s not much to choose in the long run between the Lion and the Unicorn fighting for India’s Crown. It’s the local short term that is worrying for voters. Nobody can want Bengal to be the new Lynchistan.

Quarantine? Not for minister