A sea of red 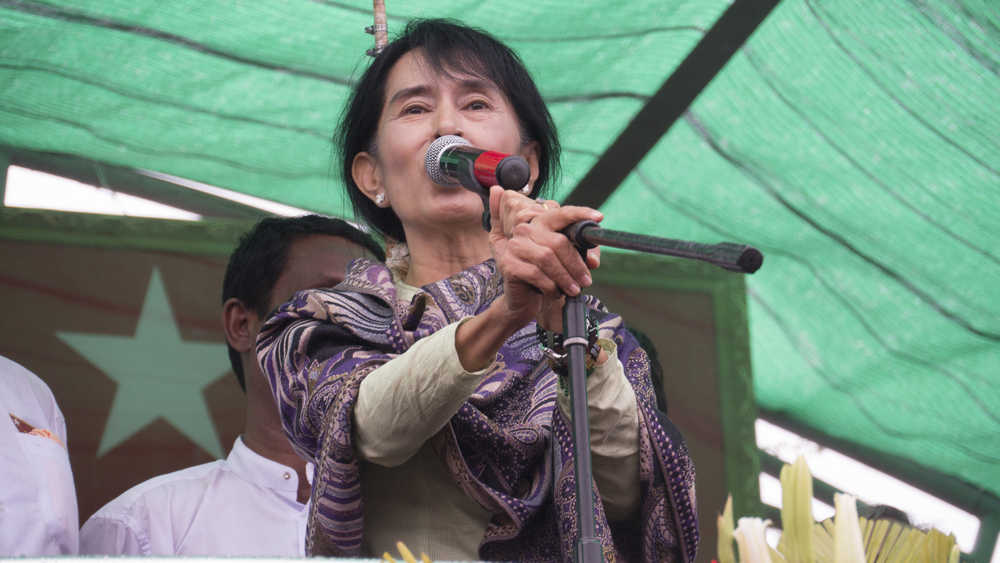 Myanmar goes to the polls in a matter of days in the midst of a surging ‘second wave’ of the coronavirus. Despite the mounting death toll — now claiming more than 30 people a day — millions of voters will cast their ballots in what is a crucial election that could decide what happens to the country’s fragile transition to democracy. This could be a watershed moment in Myanmar’s recent political history and irreversibly cement the country’s desire for democracy and civilian government.

Although the pro-democracy party, the National League for Democracy, led by Aung San Suu Kyi, won the last election in 2015, the army continues to play a major role in determining the country’s development, making it difficult for Suu Kyi to govern. The military still exercises enormous political power in what is essentially a ‘coalition’ administration: under the pro-military 2008 Constitution, the military has 25 per cent of the seats in the national and the regional Parliaments; the army chief appoints three ministers — border, defence and interior — and exercises enormous autonomy over budget, defence and security matters.

This is the third election since the former military rulers allowed a measure of democracy and introduced multi-party elections 10 years ago. Although there are more than 90 parties contesting the elections, only two are serious contenders: the NLD and the pro-military Union Solidarity and Development Party. Urban areas like Mandalay and Yangon are awash with the red flags and posters of the NLD, whereas visible support for the USDP, the ‘green party’ as it is known in Myanmar, is more subdued.

“It’s confusing all these parties — more than last time [2015],” said Yadarna Khine, a 41-year-old, female street-seller whose business has been hit hard by the strict Covid-19 restrictions imposed in Yangon. “I just know the NLD and USDP parties, but I am going to vote NLD as I wish the next government to work to help and solve all our troubles and problems,” she said.

This will be a deeply flawed election according to many academics, analysts and diplomats. Not the least because of the recent resurgence of Covid-19. For a while, it seemed that like much of East Asia Myanmar had weathered the storm, but it has been left reeling from a recent ‘second wave’ of the pandemic. The rates of infection and the death toll are continuing to mount. Last month, the country posted a record 2,000 cases in a single day: Myanmar now has more Covid-19 cases and deaths than any other mainland Southeast Asian country.

The pandemic has virtually paralysed most of Myanmar, raising significant and substantial questions about the advisability of the polls going ahead. Opposition political parties are in no doubt that the difficulties unacceptably damage the election’s viability and are clamouring for the polls to be postponed.

Electioneering has been effectively halted in most of the country. Traditional campaigning with rallies, door-to-door canvassing and other activities have been severely curtailed owing to the pandemic, and political parties have been left to campaign mostly online — which gives the ruling NLD an enormous advantage.

“More than ever this is an election which is really being fought digitally — on social media,” said Felix Hass, a business consultant and analyst based in Yangon.

While critics have accused the government of mishandling the response to the Covid-19 crisis, the pandemic has given Aung San Suu Kyi and the NLD an opportunity to emphasize leadership and authority. “Our rules and regulations are not meant to restrict people,” the country’s de facto leader and State Counselor, Aung San Suu Kyi, said in a televised speech introducing the new lockdown measures earlier last month. “We intend to contain the disease,” she pledged. She portrays herself almost as the commander-in-chief, with her nightly televised addresses to the public. “I want the people to understand how much importance our union government has given to this matter, and how much effort is being put in for the health and security of the people, to the best of our ability.”

The public response has been very positive. “As a Yangon resident, I see the government restrictions as somewhat necessary in order to contain the virus though there are some drawbacks on social and economic activities,” said Ma San Maw, a 34-year-old communication consultant.  “As far as I know, Aung San Suu Kyi is really trying hard to control and prevent the spread of the virus. I really think this government is doing a good job for our country and our people,” she added.

But it is very difficult to distinguish between her role as the country’s key civilian leader and that of the ruling party’s main figurehead seeking re-election in the run-up to the elections. As a result, most Opposition parties have accused Aung San Suu Kyi and the NLD of having an unfair advantage. These elections are now undoubtedly ‘Covid elections’ — the pandemic is dominating everything, making Aung San Suu Kyi and her NLD outright favourites to win.

“Covid has changed the landscape of the election,” according to the analyst and entrepreneur, Zaw Naing. “Her presence on Facebook is a massive win... she’s everywhere — on social media, television and the front page of the government newspapers. It’s all you see,” he added. “It will almost certainly seal the deal for these elections, as there’s little room left to move on the campaign trail — with social distancing requirements and now the ban on travel and other constraints — social media will play a critical role, even more so than in the previous election,” said the head of Mandalay Technology.

From the very early stages of the emergence of the coronavirus in Myanmar —back in March — Aung San Suu Kyi has shown strong leadership, reinforced later by the astute use of social media. Her lectures and discussions on Facebook have demonstrated the command that the government and the State Counsellor have over the situation. It has left the other political parties flat-footed and bewildered; and it has left the country’s military — an integral part of the power structure — side-lined.

“As the face of the government’s very effective response to Covid, she has done amazingly well. Her arrival on social media is good leadership and it’s been remarkably effective,” said Hass. Her speeches are retweeted on social media by NLD supporters and sympathizers and circulated on a recently formed Viber ‘Covid chat group’ with more than one and a half million official followers, he pointed out.

In Yangon at least, public opinion seems to strongly endorse the desire for a civilian and democratic future. For Aung Zaw Win, a 64-year-old English teacher, the choice is very clear: “I am very excited and eager to vote, and I will vote for the NLD,” he said. “I expect the next NLD government to write a new Constitution to replace the present [pro-military] 2008 Constitution,” he added.

Already many voters are hoping that these elections will represent a step forward on the road to genuine democracy, inclusiveness and good governance “For the start of a new era of democracy, the next government [Cabinet] must be formed with a group of technocrats in charge to formulate evidence-based policy instead of opting for loyal people because of political reasons,” said Poe Pwint Phyu, a 31-year-old medical supplies representative.

While the election maybe grievously flawed, there is little doubt that the NLD will win. But then the real problem will be the next five years. Will the NLD  be able to change the Constitution and introduce a genuinely democratic and federal Constitution, forcing the soldiers to return to their barracks?