Advertisement
Home / Opinion / An ism is coming to an end 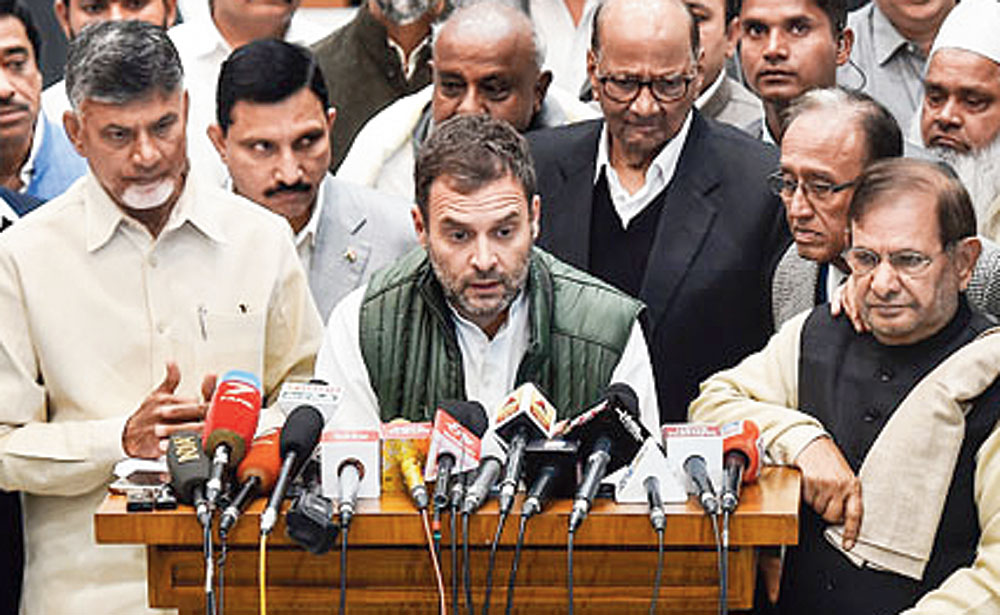 PM Modi said Opposition leaders were coming together for personal survival and not ideological affinity.
(PTI)
Manini Chatterjee   |   Published 31.12.18, 03:23 AM

On the face of it, there is nothing remarkable about the prime minister’s recent attack against the “unholy” and “opportunist” alliance of Opposition parties seeking to dislodge his Bharatiya Janata Party-led government from power in 2019. Political leaders are adept at name-calling, and as elections draw near, the rhetoric is bound to get more vitriolic.

But Narendra Modi’s December 23 address to BJP booth-workers drawn from four Tamil Nadu assembly constituencies should not be dismissed as mere poll-eve hyperbole. On the contrary, the prime minister’s pointed attacks against various Opposition parties were grounded in facts, rooted in history. In the process, Modi drew attention — inadvertently perhaps — to a significant transition taking place in Indian politics.

In reply to a worker’s question on the efforts by various Opposition parties to form a mahagathbandhan or ‘grand alliance’, Modi came up with a long response. Asserting that the Opposition leaders were coming together for personal survival and not ideological affinity, Modi said: “Do you know several of these parties and their leaders claim to be deeply inspired by Dr Ram Manohar Lohia who was deeply opposed to the Congress, its ideology and the way Congress did politics. What sort of a tribute are they paying to Dr Lohia by forming an unholy and opportunist alliance with the Congress?”

If that was an attack on the Rashtriya Janata Dal and Samajwadi Party whose leaders come from the socialist stream of North Indian politics owing allegiance to Lohia’s ideals, Modi did not spare Dravidian parties either. He recalled how the Tamil Nadu chief minister, M.G. Ramachandran, was dismissed by the Congress government at the Centre in 1980 before highlighting differences between the Congress and the Dravida Munnetra Kazhagam over the Jain Commission report (on Rajiv Gandhi’s assassination) which had led to the fall of the I.K. Gujral-led United Front government in 1998. “At that time, Congress said it is DMK or it is us but today they want to be together. If not opportunism, what explains their alliance?”

He then went on to target the Telugu Desam Party. “In Andhra Pradesh,” Modi reminded his audience, “it was N.T. Rama Rao who faced the anger and high-handedness of the Congress. He formed a party for the pride and respect of the Telugus at the time when the Congress humiliated a chief minister of Andhra Pradesh. Yet today, the party of NTR wants to ally with the Congress.”

Without taking the name of Sharad Pawar, the prime minister took the Nationalist Congress Party to task, recalling how “a party based in Maharashtra was formed in severe opposition to the Congress leadership”. But it later joined hands with the Congress and “looted” the state for 15 years. The prime minister did not spare the communists either. “It was not long ago that the Left was passing resolutions calling Congress pro-imperialist, responsible for price rise, agricultural crisis and much more. But now they sing praise of each other,” he said.

Narendra Modi’s lament, plaintive as it sounds, was not without foundation. For the truth is that all the instances he recounted are but fragments of a phenomenon that has been not just a facet but the very fulcrum around which much of post-Independence politics in India has revolved — a phenomenon called anti-Congressism.

This was, in many ways, only natural. Having led the freedom struggle against the British raj for more than six decades before Independence, the Congress was the overwhelmingly dominant political party of India, with its roots and branches spread across every corner of the country. It encompassed within its fold a multiplicity of thoughts and streams, ranging from the left to the right.

But as democracy deepened and competitive electoral politics took roots in India, its hegemony came under increasing challenge. Much like the joint family of yore which broke up bit by bit with younger generations preferring to set up their own homes rather than living under the — occasionally comforting, more often stifling — embrace of the patriarch (or matriarch), individual leaders and parties started breaking away from the Congress umbrella.

Congress could mean all things to all people. For some erstwhile Congress stalwarts, Nehru’s Congress was too socialist and they broke away to form the likes of the Swatantra Party. For others, like Ram Manohar Lohia, Nehru was not socialist enough. He became Nehru’s most trenchant critic, and his socialism — with its emphasis on lower caste assertion and anti-English mobilization — inspired an entire generation of political activists.

For the communists, the Congress was the principal party of the “bourgeois-landlord” classes which had to be dismantled for ushering in real progress and an egalitarian democracy.

Over the decades, as top down democracy slowly spread to the grass roots, other demands rose to the fore — ethnic, caste, regional aspirations sought their own voices and political outlets, no longer content to contend for space under an overarching all India party.

This tendency was aggravated by the fact that the Congress, as the “natural party of governance” at the Centre and in the states alike, also became synonymous with the Establishment and all its ugly accoutrements: corruption, opportunism, authoritarianism...

Over the last five years, Narendra Modi has sought to focus only on these warts that sprouted on the Congress edifice and his incessant cry for a “Congress-mukt Bharat” stems from the Rashtriya Swayamsevak Sangh’s visceral hatred for India’s oldest party.

But what the prime minister fails to see is that other parties do not share this hatred anymore, if they ever did. And it is not blind opportunism but sound political and ideological reasons that have led a range of political parties to now join hands with the Congress, or at least shed their earlier implacable hostility.

One reason is that the Congress is no longer what it used to be. In terms of power and authority, it is now a pale shadow of its once mighty self. It is no longer a threat to emerging and emergent forces. Paradoxically, the shrinking of the Congress has also brought its core values — such as pluralism, diversity, secularism, equity — to the fore; values that are near synonymous with the constitutional underpinnings of the Indian republic.

But the bigger reason for the Congress’s acceptability among erstwhile political foes is their experience under the Modi regime. The communist parties may have been the most articulate in their formulations, but many other parties, too, had felt that it was necessary to break the Congress’s stranglehold on India for it to become a more vibrant, decentralized and egalitarian democracy.

The opposite has happened. The eclipse of the Congress initially led to the rise of numerous political parties with firm bases of their own. But it was the BJP (and earlier the Jana Sangh) which took maximum advantage of anti-Congressism to first piggyback on other parties and then emerge as a single-party alternative. The decline of the Congress did not lead a hundred flowers to bloom or a thousand school of thought to contend. It only facilitated the spread of the RSS’s “One Nation, One People, One Culture” ethos that has got a tremendous fillip after Narendra Modi led the BJP to a single-party majority in 2014.

The RSS’s deep tentacles in civil society coupled with the Modi regime’s grip on State power has reduced the room for growth and manoeuvre for all political parties and social movements in recent years. Modi may have trained his guns only on the Congress, but Amit Shah’s dream of BJP rule “from panchayat to Parliament” for the next 50 years makes it clear that the real goal of the sangh parivar is a “vipaksh-mukt” (Opposition-free) India. That is why those who were bitterly opposed to the Congress in the past have shed their old antipathy.

We do not know if Messrs Modi and Shah will be able to rid India of the Congress. But they have certainly succeeded in bringing an end to anti-Congressism as the governing principle in the politics of this country.