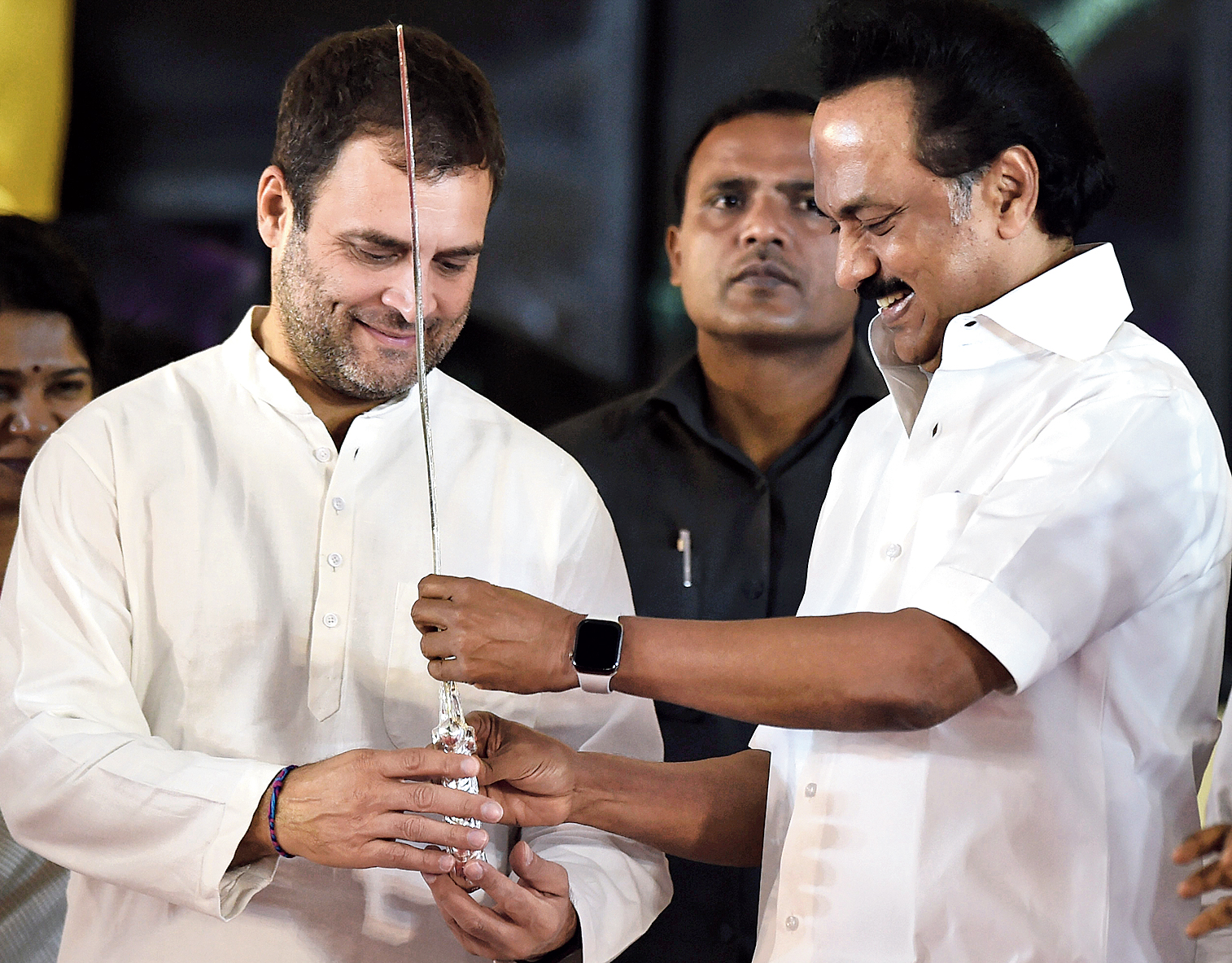 M.K. Stalin became the first non-Congress leader to propose without reserve Rahul Gandhi as candidate for Prime Minister, prompting some Opposition leaders to accept the need to consider such a proposal and spoiling the sleep of at least one potential contender.

“In 2018, on the occasion of unveiling Thalaivar Kalaignar’s statue, I propose we will install a new Prime Minister in Delhi. We will build a new India. As the son of Thalaivar Kalaignar, I propose the candidature of Rahul Gandhi from the soil of Tamil Nadu,” Stalin, the DMK president, told a rally in Chennai in the presence of the Congress president and Sonia Gandhi.

The rally followed the unveiling of a statue of DMK patriarch M. Karunanidhi who had passed away in August.

Significantly, Stalin requested other leaders on the dais to strengthen the hands of the Congress president and save the nation. Among those on the dais were Andhra chief minister N. Chandrababu Naidu, the leader of the Telugu Desam which had already fought the Telangana election in alliance with the Congress, and Kerala chief minister Pinarayi Vijayan of the CPM.

Soon after, CPI leader D. Raja was quoted by the news agency ANI as saying: “The DMK president has proposed that Rahul Gandhi should become Prime Minister. All the other parties, particularly secular democratic parties, Left parties, will have to give consideration and deliberate on this issue. Let us see….”

Other Opposition parties trying to forge a united front against the BJP, including the Trinamul Congress, Nationalist Congress Party and Chandrababu Naidu’s Telugu Desam, did not immediately react to the call officially. But NDTV quoted the Desam as saying that Rahul was the “primary contender” but that the decision would be taken after the 2019 general election.

The Opposition stand so far has been that the Prime Minister will be chosen after the elections, based on the numbers. Rahul himself has on multiple occasions voiced this line. Aware that the issue had the potential to divide, the Congress on Sunday chose not to highlight Stalin’s call.

Sources associated with at least one Opposition party are learned to have told a section of journalists that Stalin’s proposal was being opposed by several others. The leader of this party is said to be nursing ambitions of becoming Prime Minister.

Stalin was unequivocal. “Rahul has the ability to defeat the ‘Fascist Nazist’ Modi government. I appeal to all my respected party leaders on the dais. We will strengthen the hands of Rahul Gandhi. We will save this nation,” he said.

Sonia unveiled Karunanidhi’s statue and made a strong pitch for Congress-DMK unity.

“The government led by Modi has turned India’s clock back 15 years. If he is allowed to rule another five years, the clock will turn back another 50 years,” the DMK leader said. He called Modi a “sadist” for not caring to visit Tamil Nadu after Cyclone Gaja wreaked destruction in the state.

The Congress president, too, trained his guns on the Narendra Modi government. “We have a (central) government that believes that only one idea should run India, a government that believes that the billions of voices in the country should not count. A government that does not respect the different languages and cultures of this country…. all voices in India are going to get together and are going to defeat the BJP in the next elections,” he said. “We are not going to allow the destruction of the idea of India. We are not going to allow the destruction of institutions — the Supreme Court, Reserve Bank of India, Election Commission of India,” he said. “And we are going to stand together and do this.”

Naidu also focused his attack on the Modi government. “We all are victims now…. Control is in Delhi. They are running the government. Federalism is totally destroyed and the CBI is being misused left and right,” he said. “There is another danger: EVM-tampering. I am cautioning the nation... today there is a danger through EVM. If they do manipulation through EVM, nobody can do anything.”

The Desam leader, who has been pushing for Opposition unity, has confirmed he will attend the swearing-in of all three Congress chief ministers – of Rajasthan, Madhya Pradesh and Chhattisgarh – on Monday. Last month, in response to a question, Naidu had said: “Not just Rahul Gandhi, anybody will do better than Narendra Modi.”

Invites have also gone out to other Opposition parties as the Congress hopes to use these occasions to project a picture of unity, as was done at the swearing-in of H.D. Kumaraswamy as Karnataka chief minister.