The CAA-NRIC inquisition is designed to discourage solidarity 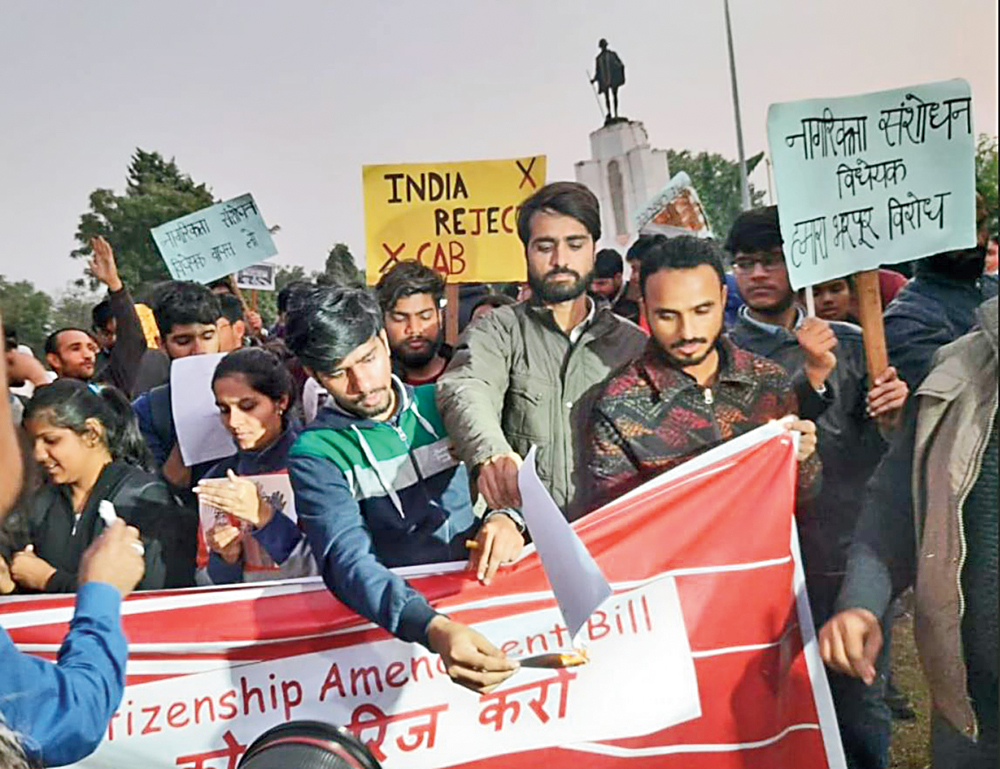 In the months ahead, after the initial outrage about the CAA has abated, the question of solidarity will arise
(PTI photo)
Mukul Kesavan   |   Published 14.12.19, 07:06 PM

The protests against the Citizenship (Amendment) Act, 2019 in Jamia Millia Islamia and Aligarh Muslim University were met with lathi charges, tear gas shells and FIRs against hundreds of students. There is a reason why these universities are in the vanguard of the resistance to the CAA; they are historically Muslim foundations with large numbers of Muslim students and teachers who are directly affected by the explicit exclusion of Muslims from the ambit of the amended law.

Why should Indian Muslims, who are already citizens, be hostile to a law that makes it easier for religious minorities from ideologically Muslim states to find refuge in Indian citizenship? For the obvious reason that the underlying purpose of the CAA is to reassure non-Muslims that the all-India National Register of Indian Citizens proposed by the home minister will only affect Muslims. The Bharatiya Janata Party’s problem with the working of the NRC in Assam was that the process excluded too many Hindus. The CAA is the BJP’s solution to this problem. If the all-India NRIC comes to pass, every Indian will have to produce documentary proof of citizenship but non-Muslims will have a get-out-of-jail card: they will be able to invoke the CAA and claim that they are refugees from hostile Muslim countries. Undocumented Muslims, on the other hand, will be excluded from citizenship.

Assam’s experience with the NRC shows us how difficult it is for people, especially the poor, to furnish acceptable proofs of birth and residence and how disruptive, traumatic and threatening the process of verification is. Before unleashing it on the whole nation, the BJP needed a way of indemnifying non-Muslims (read Hindus) against the existential threat of disenfranchisement, internment and deportation, and this the CAA has supplied. The CAA is designed to reassure non-Muslims while insidiously suggesting that Muslims who can’t produce NRIC-mandated proofs of citizenship are ‘infiltrators’ and ‘termites’. The home minister tours the country connecting the dots, reassuring non-Muslims that they have nothing to fear while simultaneously promising to expel every last ghuspaithiya (by definition a Muslim thanks to the CAA) from the country inside five years.

Muslims have responded in two ways. First, they have begun to gather up such documentation as they can find. Newspapers report that WhatsApp groups have begun to circulate tutorials and advice on assembling the paperwork that an inquisitorial NRIC might require. Title deeds, school-leaving certificates, burial records are being collected into a personal archive of belonging. Second, they have begun to organize and assemble to demonstrate and protest, rights guaranteed to every Indian citizen by the republic’s Constitution. Kafeel Khan, doctor and activist, combined these two responses: he asked Muslims to complete their paperwork even as he joined Yogendra Yadav in calling for a massive movement against the CAA.

In the months ahead, after the initial outrage about the CAA has abated, the question of solidarity will arise. Opposing the CAA out of an abstract commitment to constitutional values is not the same as opposing an inquisition that poses an existential threat to your liberty and your claim to Indian citizenship. The evil genius of this conjoint inquisition — NRIC-CAA — lies in the fact that it is designed to discourage solidarity. It is human nature to feel less urgent about a threat to an abstract principle (from which you are legally insulated) than an imminent threat to the very foundations of your existence. It’s the difference between an optional idealism and necessary self-preservation.

In an opinion piece on the CAA, Suhas Palshikar, the distinguished political scientist, argues that protests by intellectuals and activists against the law lack ‘traction’ because of the lack of mass participation. He notes that the larger public seems persuaded that the amendment is both fair and constitutional. According to him, the problem with liberals is that they expected abstract ideas to win political victories whereas the truth was that in real life “[d]emocratic struggles for high principles do not happen in a vacuum.” The only way that liberals can prevail against the BJP’s clear-headed majoritarianism is if their “... principles [were] married to lived realities and actual group anxieties.”

This is very acute and would seem to suggest that one way of giving our commitment to constitutional values traction would be for liberals, activists and others of all faiths to root their opposition to the CAA in the very real ‘group anxiety’ of Muslims. Palshikar predicts that the focus of resistance to the amendment would move from Assam, Tripura and the Northeast to Muslims as the message of the CAA-NRIC, that Muslims were barely tolerated citizens, begins to sink in. But he is pessimistic about the fate of this Muslim resistance because he expects it to further ghettoize Muslims and communalize their politics on account of their “tendency to slip into the hands of the more orthodox, conservative elements”.

Liberals often chide Indian Muslims for the insularity of their politics. It’s worth saying here that whatever one thinks of identity politics, when a majoritarian State systematically discriminates against a religious community, it is unreasonable to expect that community not to mobilize against that discrimination. And since civil society in India is not famous for its concern for the many ways in which Muslims are discriminated against, it is reasonable for Muslims to act on the assumption that in a moment of crisis they will have to shift for themselves.

If liberal commentators and men and women of goodwill are concerned that the Muslim struggle against the CAA might be captured by reactionary community leaders, the onus is on them to empathize with what Palshikar describes as the ‘lived reality’ of Muslims. And then it follows that they should act (and continue to act once the headlines about this pernicious amendment have shrunk to lower case) in meaningful solidarity with Muslims, so that the Muslim struggle against the CAA becomes a local instance of a more general movement to defend constitutional values. In a striking phrase, Palshikar writes that “principles get strength... collaterally” by which he means that the strengthening of liberal principles is an incidental by-product of democratic movements. There can be no better way of strengthening our ideal of equality than by marching in step with a beleaguered community in the name of the republic.