How Muslims are striving to keep it peaceful, inclusive and secular 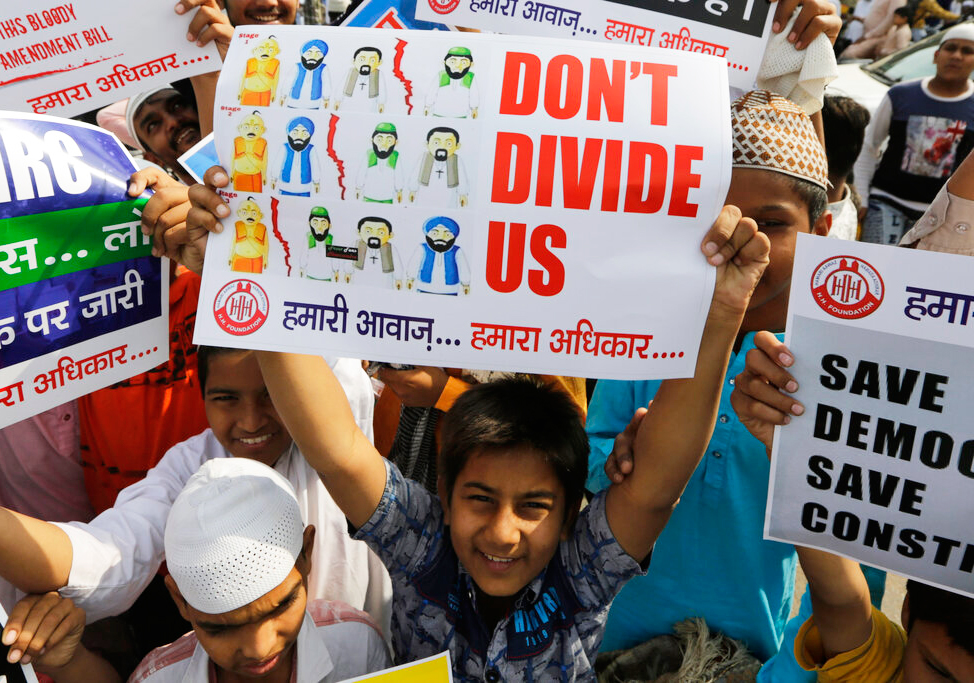 The first Friday since the Citizenship Amendment Bill was signed into law brought thousands of Muslims out on the streets in several parts of the country.

Events that unfolded during the day and the symbols that stood out articulated not just a deep-rooted insecurity and sense of letdown but also the thin line on which the minority community is being compelled to walk in contemporary India.

• From Calcutta to Kozhikode in Kerala, community leaders repeatedly appealed for peace and underscored the need to keep the protests against the religion-specific legislation non-violent, inclusive and secular.

• The community elders appealed to people from all walks of life and faiths to spearhead the movement. Several speakers iterated their faith in the Constitution and requested all other communities to join the protests. The point they were trying to hammer home: the Muslims are not fighting for themselves but to preserve the idea of India.

At a rally organised by the Jamaat-e-Islami Hind in Calcutta, representatives of other communities were also seen marching from the Tipu Sultan mosque to the Gandhi statue at Maidan. The other two prominent gatherings in the city were at Park Circus and Belgachhia.

• Chants of “Hindustan zindabad” were heard at many of the venues in Calcutta, where the national flag was a prominent fixture.

Some instances of violence and vandalism — at Beldanga in Murshidabad, Arambagh in Hooghly and Uluberia in Howrah — did take place in Bengal. Two railway stations were ransacked.

At Jamia Millia Islamia University in Delhi, students protesting against the amendment alleged that they were mercilessly caned by police who entered the campus. As many as 70 students were injured.

These are the motifs the community fears will be twisted by propagandists to give the fledgling movement a bad name and hang it.

When tyres were burnt in a minority-dominated locality in Calcutta in the afternoon, messages went out on social media hinting at “riots”.

Burning tyres in a polluted city like Calcutta is by no means desirable but it is a form of protest that was seen in parts of Assam, too, a day earlier. No one chose to give a communal tinge to the Assam movement, and rightly so.

In Bengal on Friday, the BJP was quick to blame “infiltrators”, the segment the party wants to uproot through legislation like the Citizenship (Amendment) Act, for the instances of violence.

Chief minister Mamata Banerjee is aware of the potential pitfalls that mischief-makers can exploit.

“These protests are spontaneous, but I have requested them not to cause hardship to people as the people are the backbone of any form of protest,” said Mamata, who is planning movements from Monday against the “twin blows of NRC-CAB (as the bill was known before it was signed into law)”.

Mamata asserted that the anti-NRC-CAB movement would be secular and non-violent.

At every twist and turn, the Muslim community in India is now running into a paradox. Wearing skullcaps never drew attention in this country earlier, but a sighting of rows of such headgear at a protest nowadays inspires devious interpretations.

The community is aware that any overt show of protest would set the stage for polarisation, which would eventually help parties like the BJP in the elections.

The protests on the roads that started in the afternoon took the form of small meetings and street-corner gatherings in Muslim-dominated areas as community leaders began drawing up plans to take the movement forward and get larger sections of society to endorse their demands.

“Our Muslim community feels dejected with the passage of the bill at a time they are already worried about the possible repercussions of a rollout of an NRC exercise in Bengal. But it is also true that the community knows that the protest will have legitimacy if they keep it non-violent and secular,” said Imtiaz Molla, the convenor of the Joint Forum Against NRC, a rights group.

A Tricolour being carried at a march in Calcutta on Friday against the Citizenship Amendment Act.
(Picture sourced by The Telegraph)

In Kerala, which like Bengal has a sizeable Muslim population, the Indian Union Muslim League (IUML) has appealed to all to join its protest movement, beginning next week. The IUML is a Congress ally that has withstood pressure from radical groups to shed its secular credentials.

Busy making preparations for a 50km march by 25,000 party workers from Sunday, Najeeb Kanthapuram, vice-president of the IUML Youth League, said: “We want all sections of people who are concerned about the legislation to join us to send a combined message of unity and harmony.”

IUML Kerala secretary M.C. Mayin Haji told The Telegraph: “The state has always been an example of a syncretic culture with the only difference between Hindus and Muslims being that one community goes to temples and the other to mosques. If the CAB and the NRC (National Register of Citizens) are implemented, such brotherhood will disappear forever, and we won’t allow that.”

Reports from Calcutta and the districts suggested that the protests on Friday were largely apolitical and the gatherings after prayers were organised by various minority organisations such as the Jamaat-e-Islami Hind, Jamiat Ulema-e-Hind and local outfits of imams and muezzins.

Several Muslim leaders this newspaper spoke to said they had specified at the planning stage that the protests should be non-violent and the speakers should uphold the secular tradition of India.

At Belgachhia, Alhaj Maulana Mohammad Moinuddin Qasmi, one of the speakers, reminded the audience of the secular fabric of the country. Another speaker, Haji Wasim Khan, spoke about the sacrifices made by Muslims during the country’s freedom struggle.

“If the protests become only a Muslim affair, that will help the BJP-RSS, which wants to divide the country along religious lines,” said Hasnain Imam, a schoolteacher in Calcutta.

According to him, ordinary Muslims have been joining the protests out of a deep sense of fear.

“Someone just wrote a Facebook post last evening asking people to congregate at 7pm at Park Circus, and within no time at least 1,000 people gathered, cutting across political lines. This happens when there is fear,” Imam said.