Advertisement
Home / Opinion / After Pulwama, a manufactured outpouring of grief 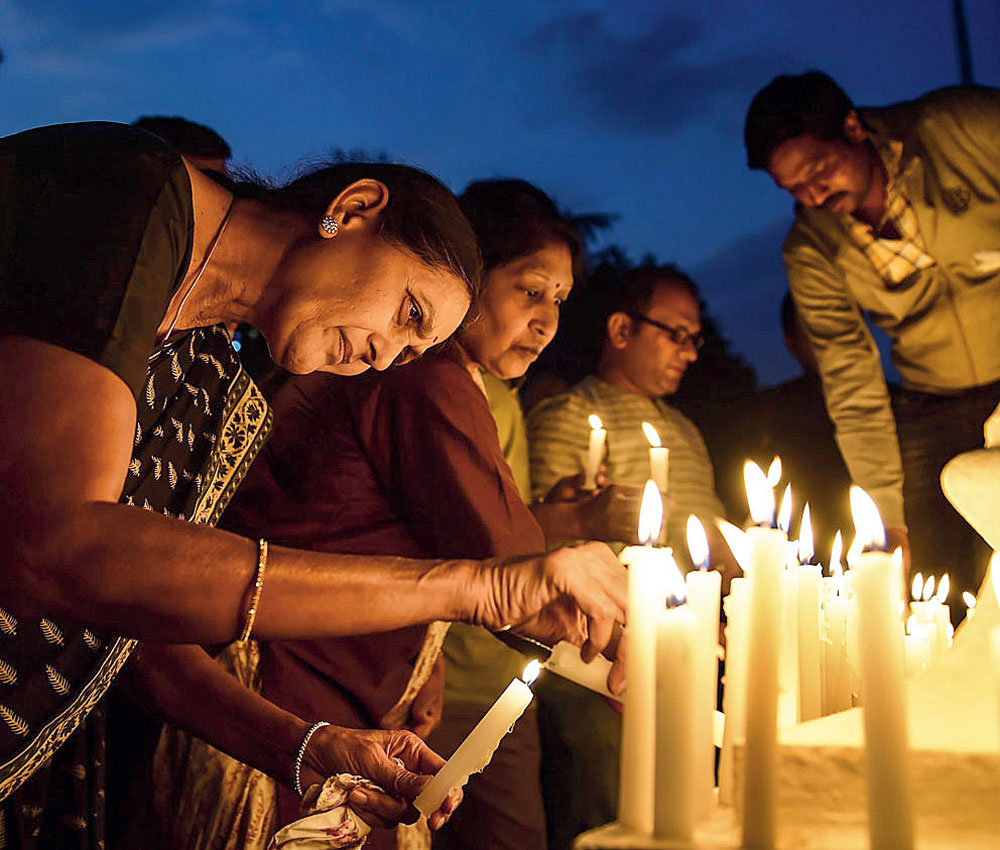 Within hours of the latest — and bloodiest — terror attack in Kashmir that left 40 jawans of the Central Reserve Police Force dead, the information and broadcasting ministry issued an advisory to “all private satellite TV channels” about the coverage of the tragedy and its aftermath.

It asked television channels to be “particularly cautious” with any content which “is likely to encourage or incite violence or contains anything against maintenance of law and order or which promotes anti-national attitudes; and/or... contains anything affecting the integrity of the nation”.

On the face of it, the advisory seemed utterly pointless. Given the ultranationalist tenor of most television news even in normal times, the chances of any channel promoting “anti-national attitudes” after such a horrific attack on security forces were less than nil.

On the contrary, the advisory provided the perfect backdrop for many a channel to indulge in unabashed warmongering. Television studios were transformed into “war rooms” and there were shrill demands for retribution and revenge against Pakistan.

Heart-rending stories about the families left behind by the hapless soldiers killed while defending the unity and integrity of the country only added to the sense of national outrage.

The advisory, it soon transpired, had had its desired effect. Such has been the impact of the hyper-emotional coverage of the Pulwama tragedy that every political party has come out in full support of the government in this “hour of national crisis”.

The Congress, living up to its reputation of being the “natural party of governance” has taken the lead. Even though the Bharatiya Janata Party and Narendra Modi himself (when in the Opposition) seized upon every terror attack to pillory previous governments, the Congress chose not to retaliate in kind.

But the statesman-like approach of the Congress president, sadly, is unlikely to curb the vituperative discourse unleashed by the ruling party and its support base. The declaration of the prime minister that every Indian’s “blood boils”, following the terror attack has given free rein to his followers to attack Kashmiris in Jammu and other parts of the country. A new tactic adopted by them is to demand that candles are lit in every house to mourn the death of the soldiers. Those who do not can then be termed “anti-national”.

The manufactured outpouring of grief over Pulwama and the talk of strikes (or even war) against Pakistan has two aims. The first, and more obvious one, is to ratchet up jingoistic sentiments to help the BJP win big in the Lok Sabha elections that are round the corner.

And the second is to stop us from asking questions about the Modi regime’s multiple failures that are, in part, responsible for the most successful terror attack against security forces in the Kashmir Valley.

That a vehicle laden with 300 kilograms of explosives could ram into a CRPF convoy in a state under the iron grip of the army is an intelligence failure of colossal magnitude.

But the intelligence failure is embedded in a bigger political failure. The BJP’s belief that Kashmir is just a “law and order” problem that can be crushed with strong-arm tactics sans political dialogue has simply not worked.

According to a home ministry reply to Parliament earlier this month, there was a 176 per cent rise in terrorist incidents in the state between 2014 and 2018. The number of civilians killed rose by 35.71 per cent; of security personnel by 93 per cent; and of terrorists by 133.63 per cent.

And the political failure stems from an ideological mindset which only values the territory of Kashmir and not its people — refusing to see that Kashmir acceded to a secular India, and has no legitimate future in a Hindu rashtra.

Adil Ahmad Dar, the 22-year-old suicide bomber, left home less than a year ago. After the Pulwama massacre, his father, Ghulam Hassan Dar, said, “It is bad that people from both sides are getting killed. The politicians are playing politics and not addressing the problem. They should try to find out why the youth are picking up the gun and are ready to take such an extreme step.”

Till we answer that question, the endless cycle of violence in Kashmir is not going to end, no matter how many revenge attacks we may undertake...