In Hyderabad, JNU, Jadavpur, Jodhpur, Ramjas College and now in Ahmedabad University – a pattern has repeated itself 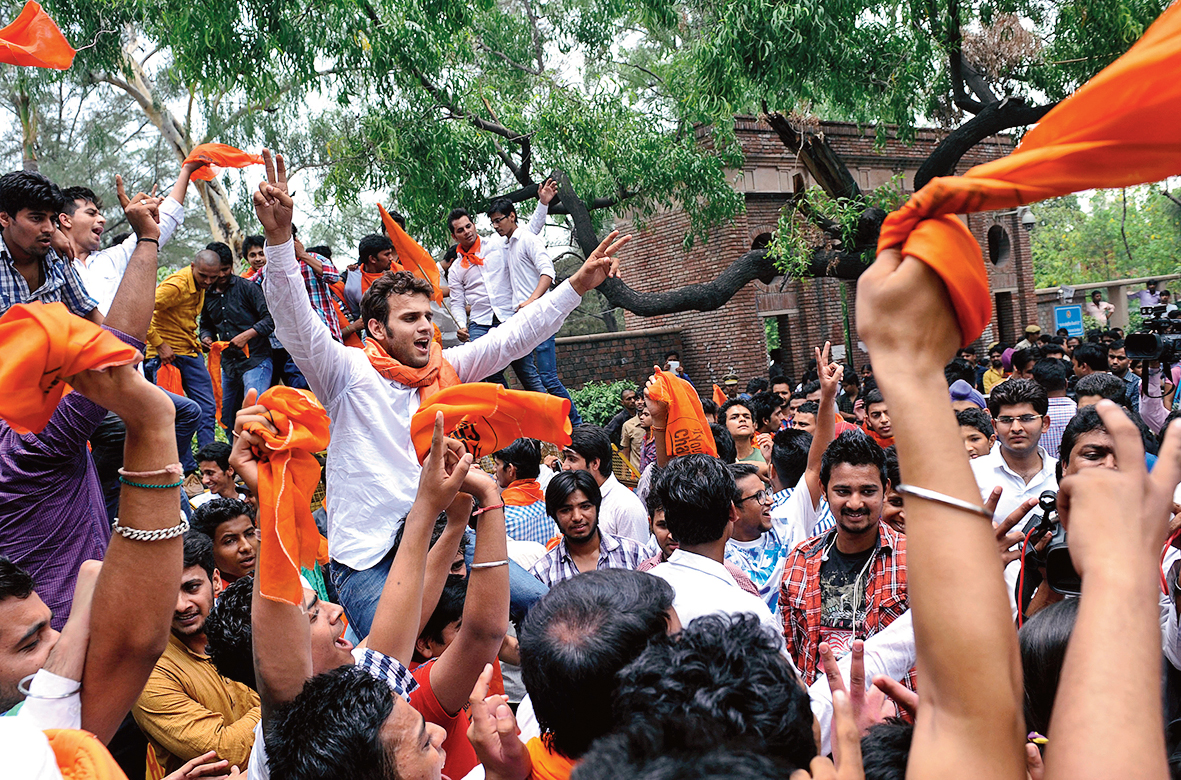 There is a pecking order in the private sector of university education in India. There are the speckled billboards that announce teaching shops on vacant exurban sites just off our highways and then there are the substantial new campuses with distinguished faculty members and idealistic founders, like Ashoka and Ahmedabad Universities.

Private universities aren’t a substitute for great public universities. They are expensive, exclusive and small. But in a university environment where public universities are being systematically starved of funds by governments that see ‘autonomy’ as a convenient euphemism for privatisation, besides being wrecked by political patronage and interference, the ideal of the private university as an island of expensively fenced-off excellence has gained some ground. When the Government of India sent a circular to central universities declaring that their teachers were to be governed by civil service rules (translation: forbidden from publicly criticising their employer, the State), the flight of academic talent to private universities began to seem not just inevitable but justified in the cause of intellectual freedom.

It’s hard to judge the track record of the better private universities on free speech issues because they haven’t been around very long but there is little to indicate that their founders and leaders are any more committed to this principle than their public university counterparts. In theory, not being underwritten financially by the State and not having their vice-chancellors hand-picked by sarkari committees ought to insulate these universities from political pressure but it isn’t hard to recall examples from the recent past where they have, at the very least, deferred to the sensibilities of the State or a majoritarian common sense.

In 2016, in the wake of violence in Kashmir following the death of Burhan Wani, 85 students, two administrative managers and a faculty member from Ashoka University signed a petition protesting the violence and asking for a plebiscite in Kashmir. By the end of that year, the two managers and the mathematics professor who had put their names to the petition had resigned. Despite the university administration’s categorical assurance that no one would be penalised for signing the petition, emails sent by Ashoka’s Faculty Council suggested that the managers had been told to resign by the university’s founders and that the academic, Rajendran Narayanan, quit after sustained pressure from the university’s leadership. The superheated chauvinism stoked by the Akhil Bharatiya Vidyarthi Parishad and the sangh parivar which roiled Jawaharlal Nehru University, the country’s most high-profile public university, in 2016 claimed victims at its most promising private university that very same year.

Which brings us to the curious case of Ramachandra Guha and Ahmedabad University, a private, non-profit university established in 2009 by the Ahmedabad Education Society. The AES has a remarkable record of institution building in the field of higher education: it helped establish the Indian Institute of Management as well as the National Institute of Design in Ahmedabad, both consensually regarded as the best of their kind in their fields. So when it committed itself to establishing a university, there was a feeling that if any private organisation could pull off the near-impossible trick of creating a first-rate private university with a full complement of departments and faculties, it was the AES.

Till a few days ago, the historian and biographer, Ramachandra Guha, was celebrated as one of AU’s prize hires. He was to be the Shrenik Lalbhai Chair Professor of Humanities. (Disclosure: Guha is a friend and a columnist for this paper.) In keeping with AU’s mission statement, the university had said that Guha would “help imagine a curriculum that lies at the intersection of history and other streams in the Humanities, as well as explore how history can enrich diverse disciplines, spanning technology, business and even specialisations such as life-sciences, heritage management or environment and energy.”

This didn’t come to pass. Earlier this week, Guha tweeted that because of circumstances beyond his control he wouldn’t be joining AU. He wished AU well, praised its faculty and vice-chancellor, and enigmatically expressed the hope that the spirit of Gandhi might again come alive in his home state, Gujarat.

The proximate cause for the chain of events that led to this reversal seemed to be the ABVP’s protest against his appointment. On October 19, Pravin Desai, the leader of the ABVP in Ahmedabad, wrote to AU’s vice-chancellor arguing that Guha’s books and articles “... have proven to be destroying Hindu culture and disintegrating the nation”. The ABVP believed that “... the youth power of the country will have no feeling for the country or our world-best culture and will become directionless and reckless by the courses created under direction of such a directionless person”. The letter ended with a threat: “If such persons co-operate with anti-national activities and activities for disintegration of India with the help of your institution, Vidyarthi Parishad will lead radical movement against your institution and you will be solely responsible for it. Akhil Bharatiya Vidyarthi Parishad makes pressing request to you to cancel appointment of Dr. Ramchandra Guha with immediate effect, for above mentioned reasons, in the interest of education and the nation.”

The university’s registrar said that the AU had no role in Guha’s withdrawal; the university hadn’t succumbed to pressure from the ABVP and that only Guha could explain his decision. Guha, on the other hand, in a series of tweets, made it clear that the decision was forced upon him. The most pointed of these said, “I am willing to debate and dialogue with anybody, and fear nobody. It is for the good people of Ahmedabad (the Board of AU among them) to make this possible, and feasible [emphasis added].”

A simple reading of Guha’s tweets makes it obvious that he’s trying to square a circle: trying, on the one hand, to spare a fledgling university that he admires the embarrassment of walking back its offer and, on the other, trying to challenge its leadership to show some spine. Anyone who has followed the recent doings of the ABVP on university campuses in Hyderabad and Delhi will know that it acts in concert with the Bharatiya Janata Party. In Hyderabad, in JNU, in Jadavpur University, in Jodhpur University, in Ramjas College and, now, in AU, a pattern has repeated itself. The ABVP will first take exception to an event or appointment on campus that can handily be described as anti-national. It will then solicit the aid of helpful legislators or ministers or party bosses to intimidate university administrations.

The truth is that the financial and administrative autonomy of private universities is no defence against the minions of a bullying State. The sponsors and founders of ambitious private universities are, inevitably, businessmen. Few of them have the fortitude or commitment that Azim Premji has displayed in his funding of educational institutions. In some ways, private universities are less hospitable places than their public counterparts for the defence or cultivation of free speech. For one, they are smaller and lack the ability to mobilise a critical mass of students and teachers in support of a cause.

The unity that bread-and-butter issues like pay scales and working conditions engender is missing in institutions where an individual’s compensation is individually negotiated. The teachers associations of public universities can be politicised and corrupt but given that their leaderships are elected, the incentive to come to a teacher’s aid is a reflex built into their constitutions. Impressionistically, at least, academics in private universities seem slow to public demonstrations of solidarity. It’ll be interesting to see if AU’s distinguished faculty members press the university for an explanation of the Guha-appointment-that-wasn’t or whether they choose to treat the affair as a series of noises off.

AU’s mission statement where it offers students “a liberal education focused on research and interdisciplinary learning” is something the worse for wear. A university can’t “mould independent thinkers and compassionate leaders who go on to engage innovatively with the complex challenges of our societies” till it learns to stand up for itself. AU shouldn’t have offered Guha a professorship in Modi’s Gujarat if it wasn’t willing to stare the ABVP and its patrons down. This is an awful precedent: if a writer as famous and as ideologically moderate as Guha is so easily excluded, what chance will brilliant but less well-known candidates with unorthodox views have in these private universities that claim to offer a liberal arts education? That is the question that the vice-chancellor of Ahmedabad University and his board need to answer.