The virtual now reigns over the divine 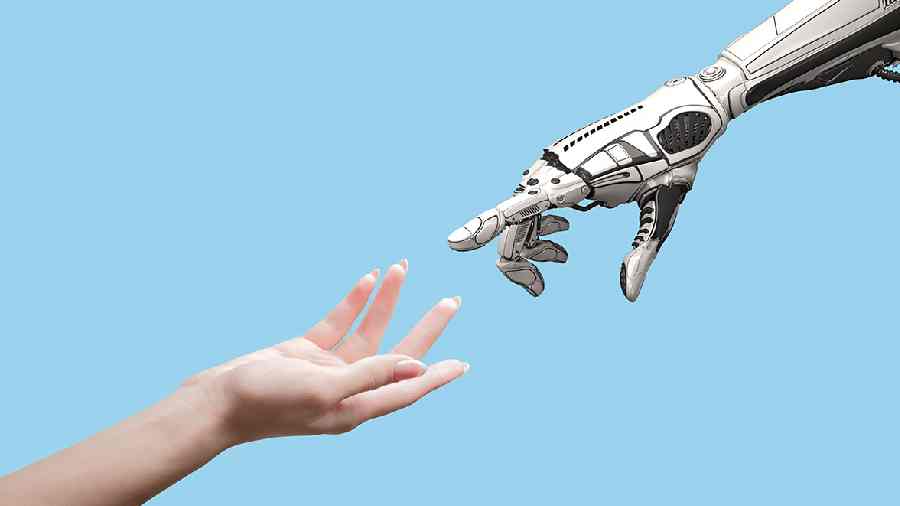 Acquisition of language some 70 million years ago helped humans articulate the imagination of a larger energy or being.
Representational picture
G.N. Devy   |   Published 14.07.22, 03:26 AM

The increased frequency with which comments on gods have resulted in hurting religious sensibilities makes one wonder about the exact nature of the attachment that human society has with the idea of divinity in a human-like form. Any speculation on when in prehistory and how precisely the idea of god emerged would be futile since we do not have any definite details about the underlying social or psychological processes. For instance, we do not know if the Neanderthal man or the Homo erectus had any idea of gods and whether they were identical or different. In the case of Homo sapiens, the idea may have emerged at a much later stage in their advent towards forming civilisations. What is known is that other animal species do not have prayer practices, neither do they worship icons. It is perhaps likely that gods got conceptualised after humans chose to cover their bodies, not just for protection from the cold but also out of a sense of shame. The emergence of what psychology describes as ‘alterity’ — a sense of ‘Otherness’ — is associated with the sense of shame experienced by individuals. It is the same instinctive alterity that makes one conceptualise a far more powerful Other who controls the world.

Acquisition of language some 70 million years ago helped humans articulate the imagination of a larger energy or being. This initial form of realisation of a larger power acquired the rudimentary form of collective offerings or prayers only when humans started forming society, each such social formation differing distinctly from other social formations. In short, the idea of god required a social identity that was not only accepted by its members but also a society that collectively accepted to place the responsibility of creation on an agency that was larger than and prior to humans. Since none had known in immediate experience what that unnamed agency was, it was imagined to be beyond birth and, possibly, beyond death. It got described as being created by itself — ‘omnipotent’ and ‘omnipresent’. Additionally, since it was not bound by material laws, it was also seen as entirely transcendental.

The ‘all pervading, all present, all creating’ idea of such an agency, shared by a large number of individuals in a given prehistoric or ancient society, became ‘god’. By then, humans had moved quite a long way from their pre-human, animal-like condition. They had figured out how to acquire clothing, dwelling and survival ability. They had already gathered a substantial experience of material things — what we call today the ‘laws of physics’. Their imagination of ‘god’, therefore, took the form of a craving for a domain of being/existence that was entirely free of the material, mortal world of humans. All earliest descriptions of god or gods invariably invoked the non-material aspects of their being. The transcendental was free of the constraints of the real or what Immanuel Kant termed the ‘phenomenal’. Human societies have moved ahead in history over the last few millennia trying to accommodate in their mental transactions the phenomenal as well as the transcendental as two aspects of their being and becoming. The sects that emerged over time, the godheads that came to be worshipped, the prophets claiming to represent divinity who founded various religions, have attempted to build bridges between the two world-views despite their differences.

Over the last few centuries, the advancement of thought, often propelled by the contradiction between the clergy and the ideation of the ‘omniscient’ principle, has brought humans close to proposing and generating a third kind of reality. At this juncture, we call it the virtual reality. In the domain of the virtual, space and time do not hinder movements of its inhabitant. The laws of motion and matter applicable in the phenomenal world pose no constraints to possibilities unfolded by the virtual world. Just as in the past eras the conceptualisation of the transcendental attracted societies to attempt entering the transcendental through intuition, imagination, aspiration or, at worst, through blind ritualistic imitation, in the present era, humans are attracted to the idea of entering the virtual. No individual, no field of knowledge, no society, no area of action and no State has remained untouched by the mesmerising attraction for the virtual. In the past, any degree of closeness to the transcendental was interpreted as ethically desirable. In our century, any degree of inwardness to the virtual is seen as a new mix of knowledge and power. If the invention of language and its advancement to a new order of complexity were the foundations of the transcendental, in the future the invention of a new and a complex order of silence — call it aphasia — is expected to provide the foundation for the virtual. Memory chips and digits are its building blocks and cyborgs its inhabitants. It shall not occupy any space of the phenomenal world. It shall not work within the laws of temporality surrounding human life, thought and action. Yet, it is not just another version of the transcendental. The transcendental was believed to know ‘all’, including its beginning and its end, although humans were not privy to that knowledge. The memory chips by themselves shall not know how or from where they came.

Caught in the tripartite visions of ‘reality’ — the phenomenal, the transcendental and the virtual — human societies are in a tangle that has no precedence in the entire history of man’s evolution. The inexorable and speedy drift of all in the direction of the virtual, irrespective of economic class, gender, ethnicity, language, theological affiliation and nationality, has posed a vastly profound challenge to both the transcendental view of reality as well as the phenomenal view of reality. The heightened sensitivity to gods and god-related matters is a symptom of that stress. It has also placed a tremendous stress on the phenomenal view of reality. The rather surprising eruption of ultra-sensitive nationalism at the beginning of a century initially lauded as the ‘knowledge century’ is a symptom of the stress. In the process of evolution, the formations and features that are at the end of their utility have been known in the past to have briefly bounced back with ferocity and rage before they were discarded. If one were to think, without losing one’s temper, and with a philosophical inwardness, it appears that the ideas of hyper-nationalism as well as hyper-sensitive attachment to any religion are doomed to be submerged in the avalanche of the virtual that is rapidly taking over the human world. The idea of a Hindu nation or an Islamic State has one thing in common: they cannot survive for long given the new turn that the human vision of reality has taken.