Fourteen years on, the proposal to construct a geo-synthetic guard wall at the Gopalpur beach to check erosion is yet to be implemented. 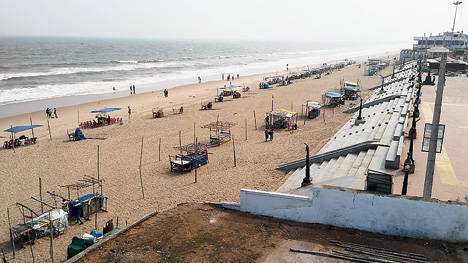 Berhampur: Fourteen years on, the proposal to construct a geo-synthetic guard wall at the Gopalpur beach to check erosion is yet to be implemented.

Executive officer of the Gopalpur notified area council (NAC) Uma Shankar Sethi said: "Only a small portion of the beach has a guard wall now. This wall had also been washed away by tidal waves few years ago and it has been recently reconstructed. The Gopalpur beach should have guard walls like the ones in Puducherry. It needs large-scale investment. The Berhampur Development Authority has recently initiated steps for a Rs 5-crore beach development programme."

The plan is to have at least 2km of geosynthetic guard wall. The estimated cost of such guard wall is around Rs 6.5 crore for a kilometre. The polymeric nature of the geosynthetic walls makes them suitable to be used in this area. Geo-synthetics are extensively used in geo-environmental projects such as reservoirs, canals, dams, erosion control, sediment control and landfill liners, official sources said.

Over the past few years, the coast line of this beach resort is facing extreme sea erosion. According to geologists, catabolic waves on this coast are the reason behind it. The erosive action of the sea waves is not allowing conventional guard walls to survive long.

The seaside town, a tourist attraction, lacks adequate measures for protection of the beach from high tides. Usually, the sea remains rough from the end of July to October. High tides eroded around 50 metres of the beach between 1999 and 2007. During the period, a special team had inspected the beach and submitted a proposal to the government for construction of a synthetic guard wall along the 2km stretch, the sources said.