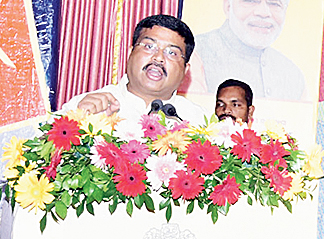 Union minister for petroleum, skill development and entrepreneurship Dharmendra Pradhan said on Friday that there was a need for growth of silver and gold tarkashi or filigree craft so that it gets a proper place in the global market.

The programme focused on access to credit and access to market and facilities. It will run for 100 days in 100 districts or clusters of the country that include four clusters in Odisha — Cuttack (tarkashi), Paradip (marine products), Puri (handicraft) and Bargarh (handloom).

Pradhan said the outreach programme was aimed at reaching out to the tarkashi entrepreneurs in the Cuttack and appraise them about various facilities, including credit facilities, extended to the MSME sector by the government and financial institutions.

“The programme is of paramount importance for the tarkashi craft as it is aimed at strengthening the ecosystem for the cluster,” Pradhan said while addressing the district-level programme at Saheed Bhavan here. Pradhan said on April 28, a training facility for silver filigree artisans was launched in Cuttack.

The National Skill Development Corporation and the Gems and Jewellery Skill Council of India in association with EduJobs Academy have set up the facility centre. The centre has been planned to provide training on marketing strategies to help silver filigree artisans become self-sustainable and engage directly with buyers. “The centre will be able to grow in a big way once the state government provides land for it,” Pradhan said.

Pradhan expressed hope that the tarkashi artisans could not only avail the opportunity to upgrade their skills but use it to connect with the global market.

“If any craftsman wants to take industry-level training, he can do so at the facility centre using the latest technology. The centre will also provide training on marketing strategies, including e-commerce, so that the artisans can be self-sustained and engage directly with buyers,” Pradhan said.

Three minor boys from Rahenmal village in Gudvella block in Balangir district, who had gone to Tamil Nadu for work, have been allegedly tortured and detained illegally by some unidentified miscreants. Three other teenagers somehow managed to escape from the clutches of the unknown persons and narrated the ordeal to villagers after reaching Odisha. The family members of the detainees met district collector and police superintendent after they received unknown phone calls demanding Rs 50,000 ransom to free the kids.