With 8.58 cumulative grade point average he was declared the best post-graduate of the university 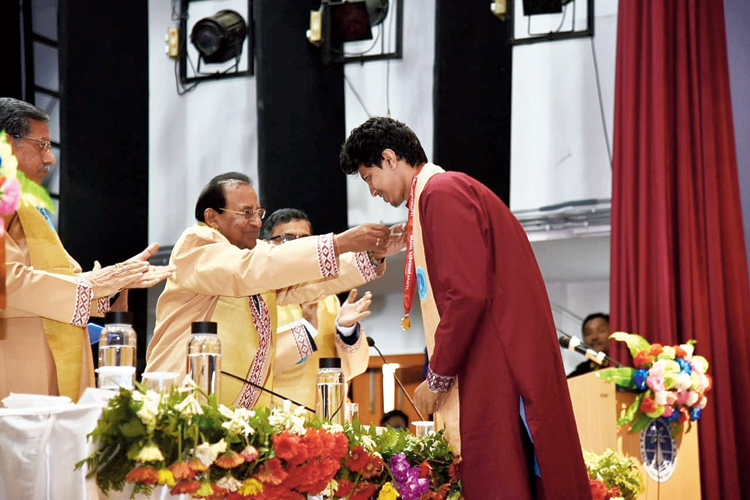 Snehashis Parasar, a youth from Dergaon in Upper Assam’s Golaghat district, has brought laurels by receiving the best post-graduate honour at the Tezpur University.

The only son of bankers Sashim Kumar Tamuly and Illy Bezbaruah of Rajabahar Dergaon, Snehashis received gold medal for his academic performance from Assam governor Jagdish Mukhi at the 17th convocation of the university on Monday.

Social worker late Narendranath Tamuly was his grandfather. His grandmother, Anu, said she was very proud of his achievement.

He cleared his HSLC exam with 92.16 per cent from Dergaon Jatiya Vidyalaya in 2012 and his HS examination with 90.04 per cent in science stream from DKD College in 2014. He took admission in Tezpur University for the five-year integrated MSc in physics in 2014.

With 8.58 cumulative grade point average (CGPA) he was declared the best post-graduate of the university.

His performance was widely appreciated at Dergaon.

DKD College principal Ranjit Kr. Bordoloi said Snehashis was a brilliant student. “We are proud of him.”

A resident of Rajabahar Dergaon and the president of NGO Aashray, Biren Ch. Saikia said, “We hope that he will contribute a lot towards the development of the state in general and Dergaon in particular.” A brilliant quizzer, Snehashis was the member of students’ science council and academic council of the university. “I will do my level best to serve the nation in general and the state as well as Dergaon,” he said.