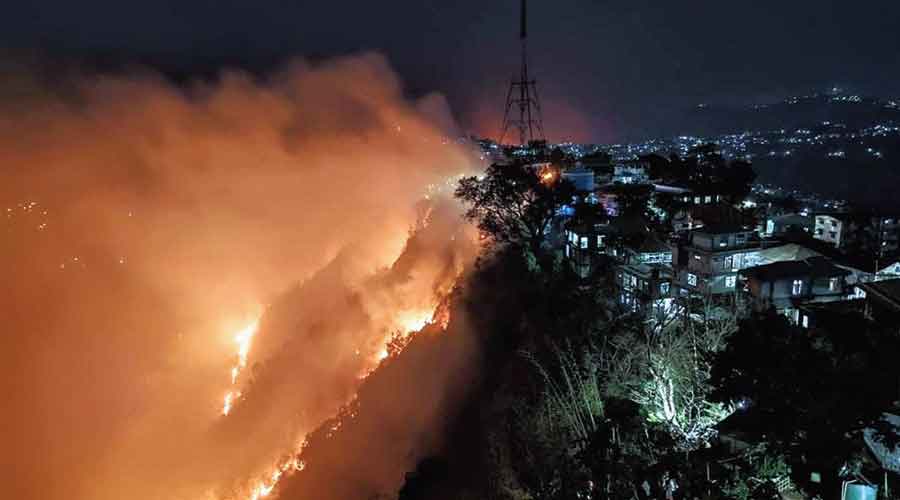 Six of Mizoram’s 11 districts have been affected till Monday evening in a forest fire that was first spotted in Lunglei district on Saturday morning prompting a massive dousing operation involving community volunteers, police and security personnel.

Government officials and volunteers said it was perhaps one of the worst wildfires to have hit the state, prompting Mizoram chief minister Zoramthanga to seek the help of the Indian Air Force to douse the fire which is still raging at a few places.

Serchhip — reveal that about 5,789.5 acres of forest area has been destroyed in the forest fire.

Though there has been no loss of life, 11 firefighters have suffered injuries till now.

Over 85 per cent of Mizoram’s total area is covered by forests, making wildfires quite common, especially during the dry season.

This year, Nagaland, Manipur and Arunachal Pradesh too have reported massive forest fires.

The devastation caused in Mizoram is unprecedented, Malsawmtluanga said.

The fire has affected 53 villages, destroyed 14 houses (12 completely), killed 20 domestic animals and forced 60 of the 83 affected persons to shift to relief camps, the senior official said based on the preliminary reports from the districts.

The remains of houses razed in Bungtlang S in Lawngtlai on Monday.

“A clear picture of the worst affected districts will emerge by tomorrow (Tuesday). Fire is still raging in some areas. Apart from the fire, we are also fighting Covid. These are very testing times for all of us,” Malsawmtluanga said.

Prime Minister Narendra Modi called up Zoramthanga to take stock of the situation while assuring all possible support from the Centre in overcoming this crisis. “We all pray for the safety and wellbeing of the people of Mizoram,” Modi said.

Zoramthanga had tweeted on Sunday night about the wildfire affecting multiple locations in the state, adding: “Keep us in your prayers!”

He had earlier spoken to the IAF authorities, explaining the extreme urgency of the situation. The IAF responded by deploying two Mi-17V5 helicopters, equipped with Bambi bucket, to douse the fire in Lunglei district and adjoining areas.

Bambi bucket are filled from nearby waterbodies by the choppers and used to spray water to douse the fire in the affected areas.

An IAF official said two choppers reached Lunglei and one of them did a recce with the deputy commissioner on board.

“No flame was reported. Only smoke was observed at two places for which Bambi bucket ops has begun,” he said.

(BSF) have also stepped out with their men and equipment,  and are actively participating in the fire-fighting

A government statement on Sunday had said the fire has been raging “non-stop” for the past 32 hours around Lunglei town in south Mizoram.

The fire was first reported around 7am on Saturday mainly in “uninhabited” forest areas surrounding Lunglei, and has spread to more than 10 village council areas within the town.

“In some localities such as Zotlang, Serkawn, Chanmari, the fire reached some buildings, but could be contained and doused before it caused any major loss to property. No loss of human life has yet been reported due to the wildfire,” the statement said.

Lunglei is around five hours’ drive from the capital Aizawl.

Dry vegetation due to drought-like conditions, coupled with strong winds, has made the mission of dousing the forest fire extremely challenging, and the unfriendly terrain of the area also poses a very serious risk and hindrance for the fire-fighters, the statement said.

Lunglei deputy commissioner and District Disaster Management Authority (DDMA) chairman Kulothungan A had convened an emergency meeting with key stakeholders in his office on Sunday.A probe is also on to find out what or who caused the fire.

“There are reasons to believe that the fire is manmade. A meeting will be convened with village councils and Young Mizo Association (YMA) leaders of the affected areas to ascertain the exact cause,” an official in Lunglei said.