The annual event is held from December 1-10 at Naga Heritage Village in Kisama, around 12 km from Kohima 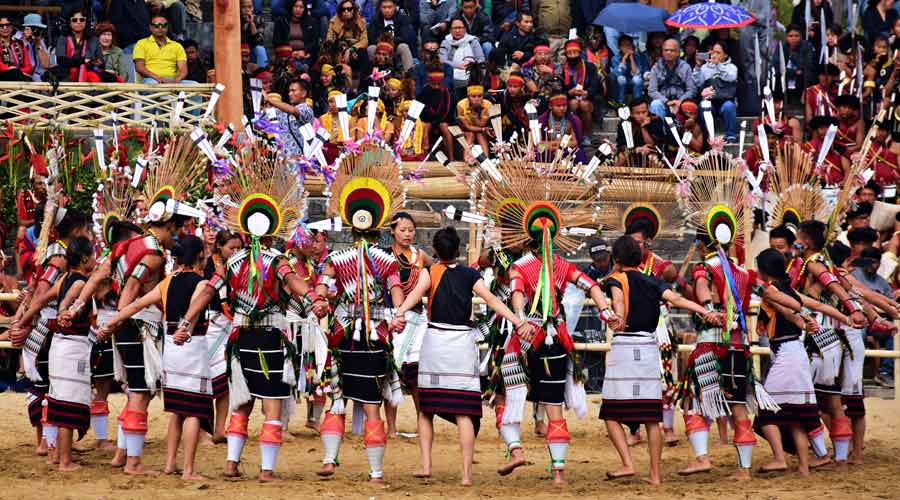 Vice President Jagdeep Dhankhar will inaugurate the 23rd edition of the Hornbill Festival in Nagaland on Thursday evening.

The annual event is held from December 1-10 at Naga Heritage Village in Kisama, around 12 km from Kohima.

December 1 also coincides with the 60th statehood day of Nagaland.

All necessary arrangements are in place with the Naga morungs (traditional huts) of various tribes decked up for the event.

Upon his arrival in the state in the afternoon, Dhankhar will hold a meeting with Governor Jagdish Mukhi, Chief Minister Neiphiu Rio and cabinet ministers at Raj Bhavan.

He will inaugurate the festival at 4 pm.

The Vice President will visit the Kohima War Cemetery on Friday morning before leaving for Delhi.

Meanwhile, the Eastern Nagaland Peoples' Organisation (ENPO), an apex body of seven major tribes in six districts of eastern Nagaland, has decided to boycott Hornbill Festival to press for their demand for a separate state of 'Frontier Nagaland'.

Student and women bodies under ENPO on Tuesday said there should not be any cultural display of the seven tribes of the eastern Nagaland in the festival.

"No individual, group or organisation and government agencies should display any cultural items belonging to seven tribes of eastern Nagaland during the Hornbill Festival under any circumstances," Eastern Naga Students' Federation (ENSF) and Eastern Nagaland Women's Organisation (ENWO) stated in a release.

The highest footfall of 2,82,811 was witnessed in 2019, which was the last full-scale celebration since the inception of the festival in 2000.

The festival was not held in 2020 due to the COVID pandemic, and it was cut short after only four days last year due to the Oting firing incident in which 13 civilians were killed during a botched operation by security forces.

Hornbill Festival is the annual tourism promotional event of the Nagaland government to showcase the state's deep-rooted traditions and rich cultural heritage.

It is a collaborative celebration of all the Naga tribes at a dedicated venue and is known as 'Festival of Festivals', while also being a tribute to Hornbill, a bird revered by Nagas for its alert nature and grandeur.