The result not only ended the Left Front’s 15-year rule, but also sent a wake-up call to the ruling BJP-Indigenous People’s Front alliance for next Assembly elections in 2023 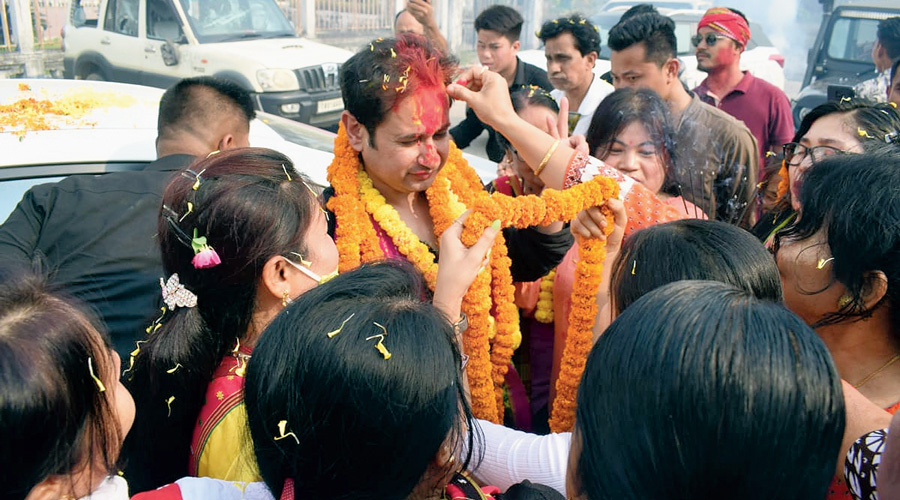 The result not only ended the Left Front’s 15-year rule of the council but also sent a wake-up call to the ruling BJP-Indigenous People’s Front of Tripura alliance for the next Assembly polls in 2023.

The BJP finished with nine seats while its ally IPFT drew a blank. The CPM-led Left Front (ruling the council since 2005 after ousting the IPFT) and the Congress, which had contested all the seats, won none. One seat went to an Independent.

Elections to the council, constituted in 1982 under the Sixth Schedule, were scheduled for May 17, but had to be postponed twice because of the pandemic. The polls finally held on April 6 registered a turnout of 85.14 per cent. The BJP had contested 14 seats, IPFT 17, Tipra 23 and the INPT 5. While 28 members of the council are elected, two are nominated by the governor.

The council covers almost 70 per cent of the state’s area and one-third of its population. Twenty of the 60 Assembly seats fall in the council area which has a voter count of 8,65,041.

Tipra’s victory will be particularly satisfying for the royal scion who had to leave the Congress soon after the 2019 Lok Sabha polls. He was the president of the state Congress which has been in freefall since before the Assembly polls. Instead of joining the ruling BJP like most of his former Congress colleagues, he concentrated on mobilising the tribal populace and parties to join hands for the council polls.

Tipra chairman Debbarma, 42, started turning heads when the Tipraland State Party and the IPFT Tipraha faction merged with his party in February while the Tripura People’s Front extended support. BJP ally IPFT too had joined hands to contest the polls but walked out after a few days following differences over seat sharing.

By then Tipra and Pradyot had made considerable progress, especially because of its Greater Tipraland poll plank, an extension of the IPFT’s separate state demand, where the interest of both tribals and non-tribals living in and outside Tripura, would be taken care of.

The BJP-IPFT alliance which has had a strained existence since winning power in 2018, was also not working on the ground.

Moreover, political observers said, the inability of the BJP-IPFT alliance to upgrade the ADC to a territorial council with more powers, to include the Kokborok language in the Eighth Schedule and to improve basic amenities in council areas in the past three years were also reasons for voters preferring the Tipra. Bengali and Kokborok are the official languages of Tripura which has a population of about 42 lakh.

“The IPFT is the biggest loser of the polls along with the Left Front. Tipra has made a huge dent in the IPFT vote share, something which can help the royal scion become a key factor in the Assembly elections,” one of them said.

Pradyot won from Takarjala, 30km from Agartala, on his electoral debut.

Soon after he appealed to his supporters to maintain peace and convey that those who have won and those who lost are his own people. “We want to change the (poll) culture. I don’t want any kind disturbance. The best way to celebrate a victory is by sharing the joy of winning,” he said while offering “commiseration” to his opponents.