In the first phase, the exercise commenced at Guwahati, Imphal, Dimapur and Calcutta, and will continue till October 19 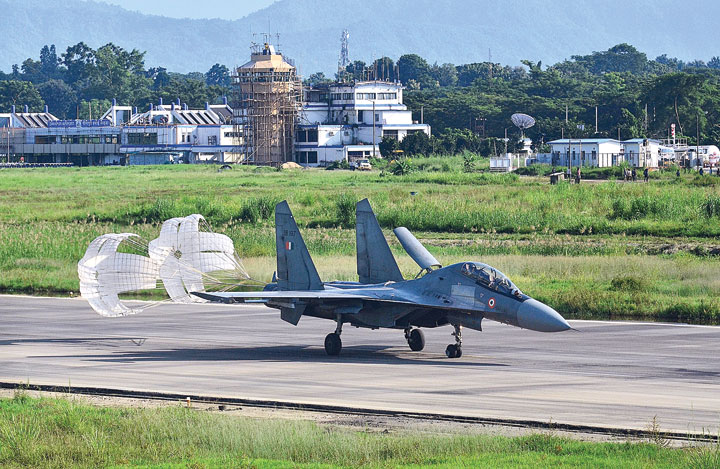 The Eastern Air Command began its first phase of fighter operations exercise on Wednesday from four airfields where Sukhoi and Hawk aircraft are deployed.

In the first phase, the exercise commenced at Guwahati, Imphal, Dimapur and Calcutta, and will continue till October 19, defence spokesman Wing Commander Ratnakar Singh said.

The second phase from October 29 to November 1 will involve the Andal and Pasighat airfields, he said.

“This exercise is part of capability-building and operational training of undertaking operations from dispersed locations in case of hostilities,” Singh said.

He also said the exercise would familiarise the crew with the procedure of flying at busy airfields and coordinate with civilian counterparts. At the same time, he said, it will help familiarise the civilian functionaries at these airfields on the conduct of military operations.

Singh said Sukhoi-30 MKi and Hawk 132 aircraft are taking part in this exercise.

The upgraded advanced landing ground at Pasighat in Arunachal Pradesh was inaugurated in 2016, and facilitates air connectivity with the rest of the country. It was taken over by the Indian Air Force in February 2010. Previously, it was a small strip of partly paved, partly grassy land, and reinforced with perforated steel plates. It was utilised in the past for air maintenance sorties and casualty evacuation by the air force.

The Eastern Air Command headquarters was shifted from Calcutta to Shillong on June 10, 1963, as during the Sino-Indian conflict of 1962, practical experience highlighted the difficulty of the location. Initially, the headquarters was housed in the old buildings at Nonglyer village in Upper Shillong.