Static wheels bring life to a standstill at Guwahati 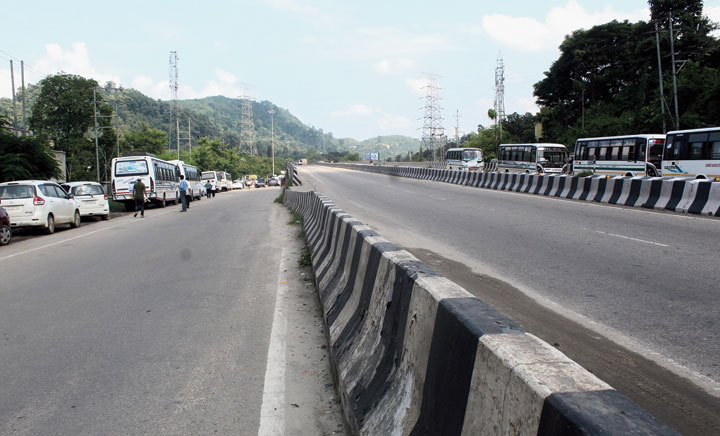 Commuters in Assam had a tough time on Thursday after hundreds of buses went off the roads during the 24-hour statewide chakka bandh called by the All Assam Motor Transport Association from 5am, demanding a hike in fares.

Association secretary general Pradip Das said, “AAMTA called the bandh to demand a hike in the fares of commercial vehicles in the state. Diesel prices and vehicle registration fees have risen constantly since 2016 because of which the operators are facing a tough time. Hence, a limited increase in bus fare is inevitable.”

Government sources said the association has demanded a 50 per cent rise in bus fares.

It had placed its demands in October last year too.

The association threatened to launch intensified protests after Durga Puja if its demands are not fulfilled.

Das said they submitted a memorandum of their demands to chief minister Sarbananda Sonowal and governor Jagdish Mukhi on September 25. “We are mainly demanding regularisation of fares of long-distance buses. The last hike in fares was made on October 11, 2012.”

He said a small hike had been made in commercial buses but a further hike was required as commodity prices had increased. “We urge the government to take immediate steps to regularise bus fees,” he added.

He said state transport minister Chandra Mohan Patowary had, during a meeting in July this year, assured them of a fare hike but nothing had come of it.

Mridu Paban Kalita, a resident of Tezpur, who had plans to visit Guwahati, said, “There was no bus on the road. Government buses were so packed that I had to change my plan.”

In the city too, hundreds of buses went off the road. Hundreds of commuters were seen waiting on the roads for buses in the morning, especially during office hours. A few government-run buses were plying, but people appeared to prefer cabs and autos.

Gitartha Hazarika, a resident of Tarun Nagar here, said, “The sudden drop in city buses has put people like me in deep trouble. There is hardly any alternative. Government buses are limited. The government should increase the number of buses. The fares of government buses are also less compared to commercial vehicles.”

A surge in the fares of app-based ride-hailing cabs like Ola and Uber was observed as buses went off the city roads. The fares were almost double on busy routes.