All areas in Shillong city and around it will be under curfew; move follows spike in Covid cases 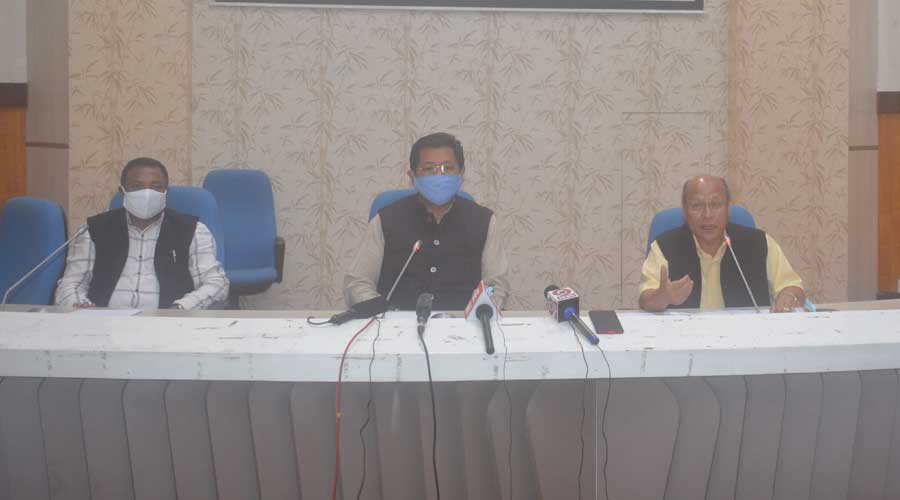 The Meghalaya capital will go into lockdown on Monday and Tuesday following a surge in Covid-19 cases in the past few days, chief minister Conrad K. Sangma said.

The state has seen a sudden spike in Covid-19 cases. While on June 24 there were only four active cases, the number had increased to 236 by Saturday.

On Saturday alone and till the filing of this report, there were 47 active cases which were detected.

The remaining cases are of civilians, including those who came into contact with two positive patients who attended a wedding at Khanapara, and some staff at the North Eastern Indira Gandhi Regional Institute of Health and Medical Sciences.

However, Conrad said almost all of the 236 cases are asymptomatic.

The lockdown on Monday and Tuesday to be observed in the Shillong agglomeration was required since there are currently 205 cases in East Khasi Hills alone.

Conrad said more than 95 per cent of cases that are currently active are from Shillong.

He said the right understanding will lead to correct behaviour among everyone for taking responsibility of their actions, both in personal and public spaces.

He said that during the lockdown, all areas in Shillong city and around it will be under curfew. The curfew will continue till 6am on Wednesday.

“Remember: we need to fight and isolate this virus together; not just the government or the health workers — we all need to be Covid warriors,” he added.

He added that during the lockdown period, contact tracing will be undertaken of the patients who are in Shillong so that further spread may be contained.

The chief minister urged everyone to strictly adhere to the lockdown to isolate the coronavirus.

On whether the state government would freeze the entry of residents into Meghalaya, Conrad said that while a discussion on this had taken place, it was felt that for now, those who belong to the state and are returning would be allowed to enter.

Till Saturday, 21,496 citizens had returned to the state.

He also said the movement of people from other parts of the country into the state is still prohibited.

It may be mentioned that on Friday, the state government directed the East Khasi Hills district administration to file first information reports against all the 41 people who had attended the wedding at the Greenwood Resort in Khanapara.

The health department has issued guidelines to the BSF inspector-general at Umpling, which need to be adhered to as measures to contain the spread of the virus.

The BSF camp at Umpling has also been declared a containment area while random testing of people living in the vicinity of the campus will be carried out from Wednesday.

To tackle the spread of the coronavirus, the government has also decided to penalise those who flout protocols where fines of up to Rs 500 would be imposed. For repeat offenders, the fine will be doubled.