Sonowal rued that the state had lost an important leader 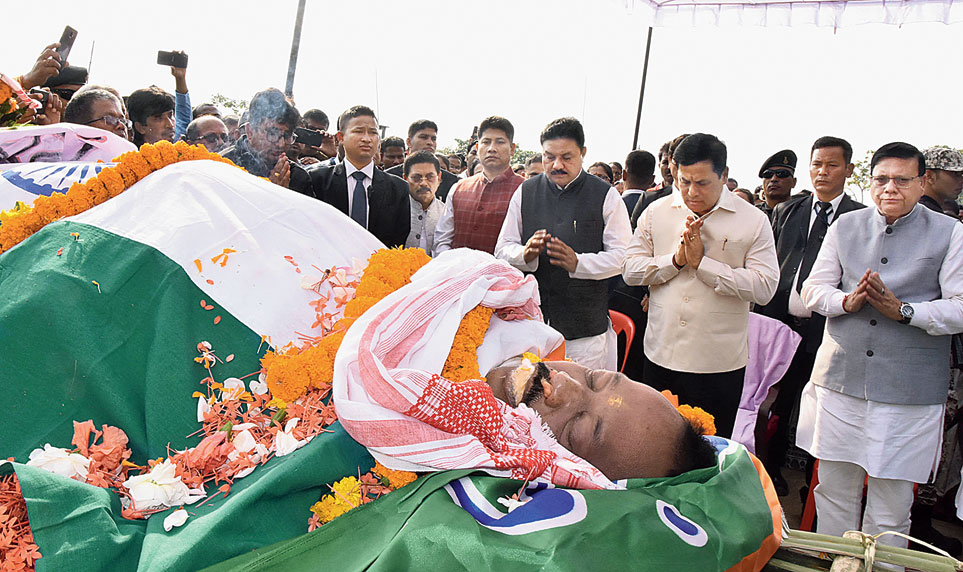 The last rites of social worker and Rangapara MLA Rajen Barthakur, who passed away at Times Hospital here around 10.29pm on Tuesday night, were performed at his residence on Wednesday in the presence of chief minister Sarbananda Sonowal, and many other leaders gathering to pay tribute.

Sonowal said, “We have lost a positive leader. He wanted to work for the greater interest of the public. We lost a good person.”

Barthakur had been suffering from multiple disorders, including septicaemia. He was admitted in a critical condition at the Times hospital here by Tuesday.

He was 53. He is survived by his mother, wife and two brothers.

Barthakur was elected to the Assam Assembly from Rangapara in the 2019 byelection as a member of the BJP.

The byelection was necessitated after Pallab Lochan Das was elected to Parliament.

Born to a teacher of the Haleswar area, Suren Barthakur, and Minu Barthakur on November 5 in 1966, the deceased completed his school education at Haleswar High School.

He went to Tezpur and Darrang College.

He had been involved in the Assam Agitation as a college student.

Besides being associated with various socio-cultural, national and sports organisations, he got involved in active politics by contesting as a ZPC member independently from Haleswar constituency under Tezpur in 2001.

He was then elected in the 2006 panchayat election as a ZPC member contesting on a Congress ticket.

Later in the 2011 Assembly elections, he was elected as an MLA from Tezpur on a Congress ticket.

He later joined the BJP party and was made chairmanship of the Assam Textbook and Publication Corporation.

The deceased MLA was elected Rangapara MLA in the recent bypoll in Sonitpur district.

He was also a brilliant actor and sports organiser, loved and respected by all sections of society for his amiable nature and personality.

His sudden demise has saddened the people of both Tezpur and Rangapara constituencies.