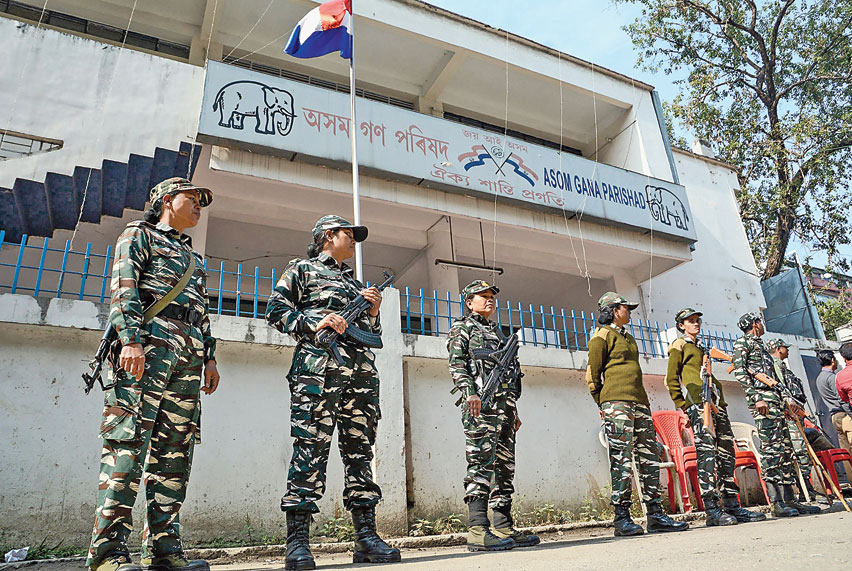 Security personnel guard the AGP office in Guwahati on Tuesday after party members, who oppose the citizenship act, including senior leader and former chief minister Prafulla Kumar Mahanta, were barred from holding a meeting there
(PTI)
A Staff Reporter   |   Guwahati   |   Published 07.01.20, 10:19 PM

It was an “unusual” scene in front of the AGP headquarters in Ambari in the city on Tuesday morning when party workers from various district committees of AGP were restrained from entering their own party office.

Several members and leaders from at least 29 district units of the party, including former chief minister Prafulla Mahanta who reached the party office to attend a discussion on the contentious Citizenship Amendment Act (CAA), were barred by security personnel from entering the office campus and hold the meeting.

Security forces said they were instructed to do so. Later, they shifted the meeting to the nearby Asam Sahitya Sabha auditorium here. Following the “embarrassment”, the district units demanded the immediate change in the party’s leadership.

Mahanta said, “Those who are leading the party today have forgotten that they had joined the party to work for the implementation of the Assam Accord in its letter and spirit. But today, they are with the government which wants to impose CAA on the people of the state violating the Accord. Therefore, we ask them to leave the party. They can keep supporting CAA but should not malign the party’s image.”

The AGP has been facing public furore as three of its legislators, including party president Atul Bora, working president Keshab Mahanta and leader of AGP Legislature Party Phani Bhusan Choudhury, continue to hold their ministries in the BJP-led state government while the party’s general secretary, Birendra Prasad Baishya, voted in favour of the CAB in the Upper House.

“It’s such a sad day for the party when its own grassroots workers were denied entry into the party office. Has the party lost its democracy? The party constitution does have provisions for such anti-democratic steps and those who have violated it will be punished,” said Debesh Deka, an AGP grassroots worker from the Nagaon district unit.

Girin Talukdar, secretary of the AGP’s Guwahati unit, said, “The grassroots workers have been facing public wrath across the state because of the wrongdoings of our leaders. Though the party had earlier decided to oppose the CAA vehemently, the three ministers and Baishya have continued to support the BJP’s move.”

Last week too, when the AGP’s city unit wanted to hold a meeting of its members, they were allegedly denied use of the party office’s auditorium. Later, the meeting was held on the verandah of the party’s headquarters.

Reacting to the party workers’ meeting, state food, civil supplies and consumer affairs minister and veteran AGP leader Phani Bhusan Choudhury said the meeting had no validity as it was not an “official” one.

“No such meeting was conveyed officially. If some people meet in one place and talk among themselves, such discussions have no importance. We don’t consider this a meeting of our party.”

Atul Bora and Keshav Mahanta were shown black flags by AASU activists in Bongaigaon town of lower Assam on Sunday. The duo were on their way to attend a party meeting at the Barpara ground in the town.