Deka and another suspect, former deputy inspector-general P.K. Dutta, were on the run since September 20 night, the day the sub-inspector recruitment exam had to be cancelled following the paper leak 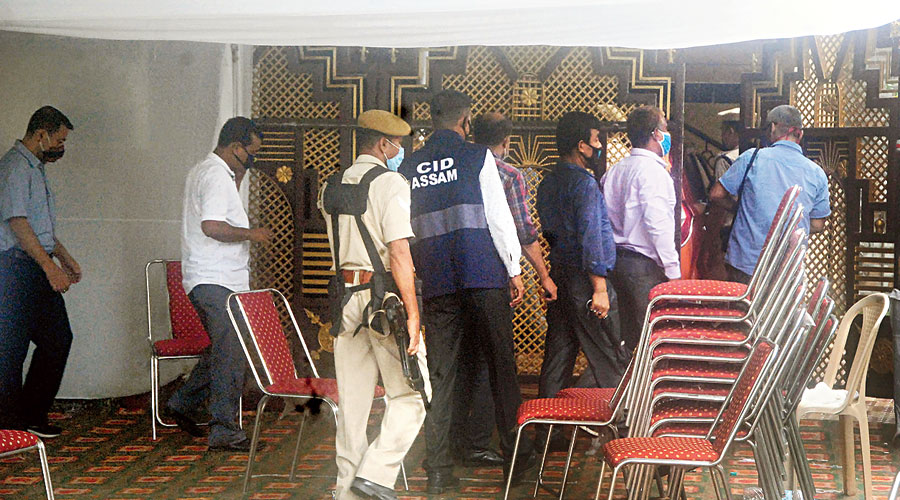 The arrest of Diban Deka, one of the main accused in the question paper leak case on Wednesday night, has led the ruling BJP rake up the “Tihar days” of Assam PCC chief Ripun Bora to blunt the Opposition Congress’s attack against the state government’s alleged lapses in holding the cop recruitment test.

Guwahati police’s crime branch apprehended Deka, a youth BJP leader, near Pathsala town in Barpeta district, around 85km from here, at 11.45pm on Wednesday. Deka was with his wife. He was detained and brought to Guwahati under a “strong” police escort by crime branch officers and lodged in a police lockup after medical examination. Deka has been produced in a “competent” court in Guwahati and remanded to five days in custody of the crime branch, city police said.

Deka and another suspect, former deputy inspector-general P.K. Dutta, were on the run since September 20 night, the day the sub-inspector recruitment exam had to be cancelled following the paper leak 12 minutes before the start of the test at noon. Deka and Dutta are allegedly involved in holding mock tests a day before the exam, among others. Altogether 29 people have been arrested by the police so far in connection with the case, including eight by the CID, 10 by the crime branch and nine by Nalbari police, sources said.

Within hours of his arrest, Assam BJP president Ranjeet Kumar Dass announced the suspension of Deka from the primary membership of the party. Several senior leaders had denied Deka’s link with the party and showcased his arrest as its commitment and that of the BJP-led state government to zero tolerance against corruption while attacking the Congress.

BJP leaders Padma Hazarika, Lakhya Konwar and Rupam Goswami not only launched a counter-attack against the Congress on Thursday but also chose Bora as a special target, raking up his “Tihar background” in a CBI bribery case. The attacks will only grow in the coming days with the resumption of hearing in the 2000 Daniel Topno murder case on October 5. Bora has been acquitted in the bribery and Topno murder cases but the CBI has contested the acquittal in the murder case.

Reacting to the paper leak case, Sootea legislator Hazarika and BJP chief spokesperson Goswami raked up Bora’s Tihar background. “Bora has no moral right to raise issues related to corruption. Why did he go to Tihar? Our government has acted swiftly to arrest the accused,” Goswami said.

Another BJP spokesperson and member secretary, students’ and youth welfare, Lakhya Konwar, went all out at a news conference against Bora for accusing chief minister Sarbananda Sonowal of being involved in the paper leak case. “But we want to ask who has had the experience of going to Tihar jail... in a CBI bribery case related to the Topno murder. It is not the chief minister, it is Bora. Our government has acted on its own in the case. It did not wait for anyone to file a complaint. Bora also has no moral right to demoralise the police force which has acted swiftly and effectively in the case,” Konwar said.

Thursday’s counter-charge has left the Congress rattled because it has been gearing up to step up its attack in the case. “Our president has been acquitted in both cases but the resumption of hearing in the Topno case is certainly not good news as it has come just months before the state polls_. We don’t know how long the case will run or what will be the outcome but our rivals will flag the court case to blunt our attack,” a Congress leader said

Topno, a tea community leader who had contested the 1996 Assembly polls against Bora from Gohpur, was killed by unidentified assailants on September 27, 2000. The case was handed over to the CBI which named Bora as an accused. The Kamrup (metro) sessions court acquitted Bora in 2014 for want of evidence but the CBI contested the order on May 29, 2014, in Gauhati High Court, which registered the case on June 3.

But there was no hearing for over six years till one Pabitra Hazarika filed an RTI application, seeking information about the case. The court then listed the case for February 24 this year but hearing could not be held that day. It has now listed the case for October 5., the day the Congress has announced the gherao of offices of superintendents of police in the districts in connection with the paper leak and job racket case.

PCC spokesperson Imdad Hussain countered the Tihar barb by pointing out that even Union home minister Amit Shah was arrested in a murder case in 2010. “He (Shah) was also charged by the CBI. This is no issue. Our president Bora sir will give a detailed counter,” Hussain said.