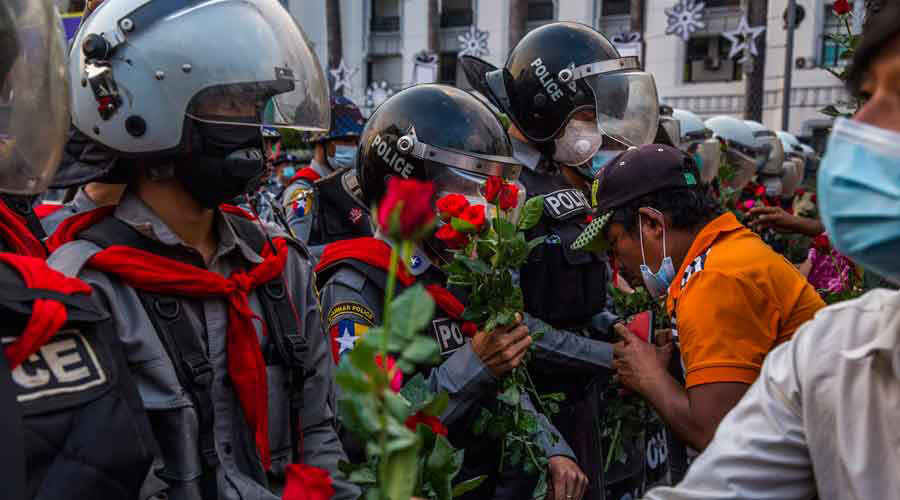 In the letter, Myanmar authorities said they had information on eight police personnel who had crossed into India.
File picture
PTI   |   Aizawl   |   Published 07.03.21, 01:35 AM

Authorities in Myanmar have asked India to return several police officers who sought refuge to avoid taking orders from a military junta that seized power in the country last month, an official in Mizoram said on Saturday.

Around 30 Myanmar police and their family members came across the border seeking refuge in recent days, as the junta’s suppression of protesters has turned increasingly violent, with dozens killed since the February 1 coup.

The senior-most official in Champhai, a district in Mizoram, said she had received a letter from her counterpart in Myanmar's Falam district requesting the return of eight policemen “in order to uphold friendly relations.”

Deputy Commissioner Maria C.T. Zuali said on Saturday that she was “waiting for the direction” from the Union home ministry.

Although there have been instances recounted on social media of police joining the civil disobedience movement and protests against the junta, this is the first reported case of police fleeing Myanmar.

In the letter, Myanmar authorities said they had information on eight police personnel who had crossed into India. The letter listed details for four police, aged between 22 and 25 years, including a female officer.

“In order to uphold friendly relations between the two neighbour countries, you are kindly requested to detain 8 Myanmar police personnel who had arrived to Indian territories and hand-over to Myanmar,” the letter said.

The Union home ministry did not immediately respond to questions. The foreign ministry responded to a request for comment by referring to a statement given at a media briefing on Friday which said the ministry was still “ascertaining the facts.”

A top official of the state’s home department had said on Friday that 16 people from Myanmar have crossed over to India over the last few days, of which 11 have claimed that they were police personnel.

Sources in the Assam Rifles, which guards the Mizoram-Myanmar border, said about 35 Myanmarese have sneaked into the state so far.

Assam Rifles DIG Brigadier Digvijay Singh said security has been stepped up along the border to stop infiltration from the trouble-torn country.

“Several people have attempted to cross the border.... We did not push them back by force but politely told them that they cannot illegally enter the Indian territory. Many of them have returned,” Singh, who is camping at Champhai, said.

Sources said four people who are currently staying in Champhai district were the first to reach Mizoram on February 28. Twelve more crossed the border and took refuge in the state later. They are now in Serchhip and Hnahthial districts.

Mizoram is already home to thousands of Myanmar’s Chin community people, who share the same culture and ancestry as the Mizos of the state.

Meanwhile, chief minister Zoramthanga said: “We have learnt that several refugees have crossed over to Mizoram. We will provide shelter and relief to those who seek refuge in the state till their return to their country.”

Addressing a programme to celebrate the Chapchar Kut, a major festival of Mizoram, on Friday, Zoramthanga said: “We have sanctioned money for the purpose.”