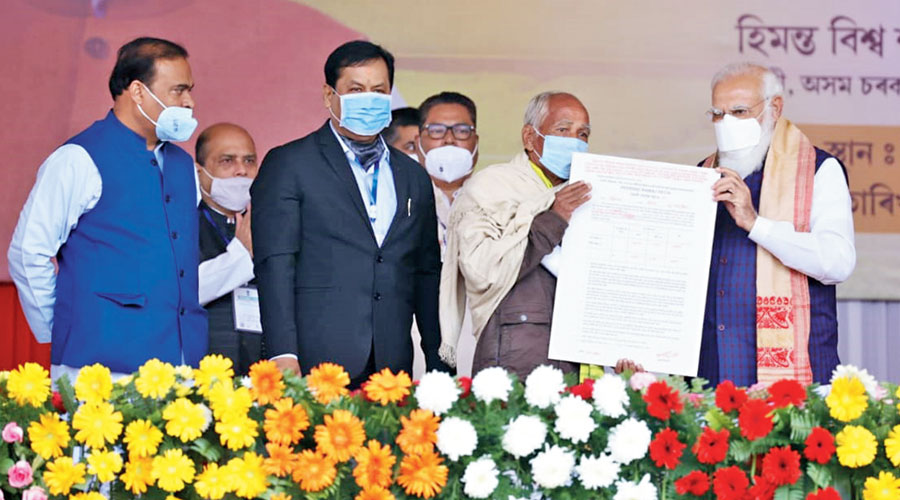 Prime Minister Narendra Modi on Saturday used a function to distribute land pattas (documents) in poll-bound Assam to target previous governments and highlight the “unprecedented” speedy development taking place in the state and the Northeast but remained silent on contentious issues such as the Citizenship (Amendment) Act and the deportation of illegal Bangladeshis.

Modi said the distribution of over one lakh land pattas to the indigenous population by the Sarbananda Sonowal-led government was a reflection of the ruling BJP’s commitment to protect the land, culture and language of the people of Assam, something the previous governments had allegedly not done.

He ceremonially launched the distribution of land allotment certificates by giving away land pattas to 10 beneficiaries at Jerenga Pathar, around 5km from Sivasagar town.
Jerenga Pathar is associated with 17th century Ahom princess Joymati, a symbol of sacrifice, courage and righteousness, who gave up her life to save her husband and future king Gadapani.

The Prime Minister said that considering the importance of Sivasagar in the history of Assam, the government is taking steps to include the town among the five most important archaeological sites in the country.

Paying tribute to Joymati and the venue of balidan (sacrifice), Modi said the distribution of land pattas has benefited over one lakh families and is connected with self-respect, independence and safety of the original inhabitants. Taking a dig at previous governments, he said even after so many years of Independence, there were lakhs of families deprived of land pattas.

He said when the Sonowal government came to power in 2016, more than six lakh people had no papers to claim their land but his government allotted land pattas to more than two lakh families, reflecting its commitment towards protection of the rights of the indigenous people.

Modi said the over one lakh beneficiaries on Saturday can now be assured of the benefit of many government schemes which they were deprived of like the PM Kisan Samman Nidhi, Kisan credit card and crop insurance policy. “Not only this, they will also be able to get loans from banks,” he said.

Modi said the rapid development and social protection of the tribals in Assam has been the commitment of the government, asserting many steps have also been taken to encourage Assamese language and literature. “Similarly in the last four-and-a-half years, efforts have been made to preserve places of historical and religious importance besides rapid steps being taken to free the encroachment and improve the Kaziranga National Park,” he said.

Though Modi said his government was committed to protecting the land, culture and language of Assam, he never once touched upon in his nearly 30-minute speech sensitive and contentious issues such as the CAA, the National Register of Citizens, deporting illegal Bangladeshis, Clause 6 of the Assam Accord, big dams and according Scheduled Tribe status to six communities of the state, which have dominated the public discourse in the run-up to his visit.

Even BJP national president J.P. Nadda had harped on the ruling party’s commitment to protecting the rights of the natives but skirted the contentious issues, except granting ST status to the six communities which was also not factually correct.

On Saturday, apart from listing out the benefits of the land patta move, Modi spoke mostly about the “unprecedented” development taking place in Assam and the region, a must for a self-reliant India.

He highlighted the benefits extended to the people of Assam under the health, sanitation, banking, education, energy, transport, connectivity and power sectors. He also lauded the state government for its role in managing the coronavirus crisis and hoped it will once again excel with the ongoing vaccination drive.

“Assam and the Northeast are instrumental in enhancing India’s connectivity with the East Asian countries. Assam is coming up as a major centre of Atmanirbhar Bharat due to its improved infrastructure,” he said.

Modi said every region of Assam is on the path of peace and progress because of the policy of taking every tribe together, including the uplift of the tea community that suffered for a long time due to neglect. “With the historic Bodo agreement, a large part of Assam now has returned to the path of peace and development. The recent election to the Bodoland Territorial Council in the wake of the agreement will usher in new paradigm of development,” he said.

The run-up to Modi’s visit was marked with protests against his trip and news meets seeking answers on the promises made by the Prime Minister and the BJP-led government between 2014 and 2016 but remained unfulfilled.

The All Assam Students’ Union and Krishak Mukti Sangram Samiti (KMSS) had staged dharnas, around 5km and 3km respectively from Jerenga Pathar, against Modi’s visit and demanding scrapping of the CAA.

The act makes it easier for non-Muslims from neighbouring Pakistan, Bangladesh and Afghanistan to acquire Indian citizenship, something those opposed to the CAA say is a threat to the very culture and identity the ruling party vows to protect.

The AASU and the Opposition Congress later questoned what was new in Modi’s address. “It was a routine speech. He did not talk about unfulfilled promises, of sending back Bangladeshis, the anti-Assam CAA, completion of the NRC or according ST status. He came to distribute land pattas which is a routine official procedure,” PCC chief Ripun Bora said.

AASU president Dipanka Nath, participating in a three-hour statewide dharna in protest against Modi’s visit, said the Prime Minister did not utter a single word on the CAA or Clause 6 of the Assam Accord. “We are firm in our resolve to get the CAA scrapped and will continue to protest,” Nath said.

Modi’s visit was followed by that of Union home minister Amit Shah, who chaired the 69th plenary of the North Eastern Council (NEC) in Shillong on Saturday. Shah reached Guwahati in the evening to launch the Ayushman Bharat scheme for central armed police forces. Shah will address two rallies in lower Assam on Sunday, his second visit since December.

The BJP has set a target of winning 100-plus seats in Assam in the Assembly polls to be held in April-May and January has seen the ruling party stepping up its campaign to retain the state.