Meghalaya has launched Mission Lakadong to produce 50,000 metric tonnes of the famous Lakadong turmeric per annum in the next five years. 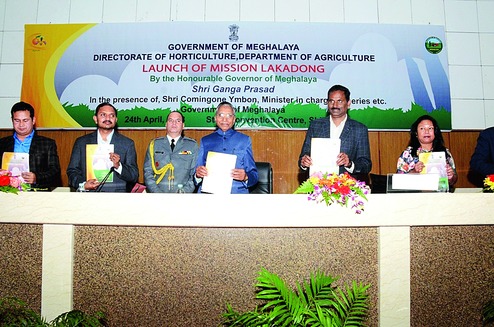 Shillong: Meghalaya has launched Mission Lakadong to produce 50,000 metric tonnes of the famous Lakadong turmeric per annum in the next five years.

The mission (2018-2023) was launched on Tuesday by governor Ganga Prasad with the objective of enhancing the livelihood of farmers and building the brand equity of the Lakadong variety.

The governor said, "I am certain that there will be massive response to any initiative that the government takes to promote Lakadong turmeric."

He said the government had proposed an investment of Rs 75 crore for the promotion of Lakadong turmeric. He urged the farmers to avoid marketing of raw rhizomes and instead market value-added products like turmeric powder and turmeric oil that will fetch them a better price.

Lakadong is a village in the West Jaintia Hills.

Commissioner and secretary, agriculture department, P. Sampath Kumar, said the state produces about 16,000 metric tonnes of Lakadong turmeric per annum and that the goal of the mission is to increase production with the aim of building the economy around Lakadong.

He said though Meghalaya produces the finest turmeric, the state does not find a place in the "list" of important turmeric growing states like Andhra Pradesh, Tamil Nadu, Odisha, Assam and Bengal.

Speaking on the curcumin content in turmeric which has ample health benefits, Kumar said the Lakadong variety has the highest curcumin content of 6-7.5 per cent according to reports of the Indian Council of Agricultural Research.

Kumar stressed on the need to bring up the value and geographical indication certification for Lakadong turmeric so that wherever it goes across the world, it shall be known as Lakadong.

"We are engaging with North Eastern Hill University with regards to research which will help us in terms of adding more value to this turmeric," he said.

The mission plans to expand the current cultivable land of the Lakadong turmeric from 6,367 acres to 15,000 acres in the next five years which is set to increase productivity from six to eight metric tonnes per hectare.

The commissioner also informed that the department of agriculture has declared a farm situated in Laskein block as a horti-hub meant exclusively for the "golden spice" to help farmers with planting material and other facilities.