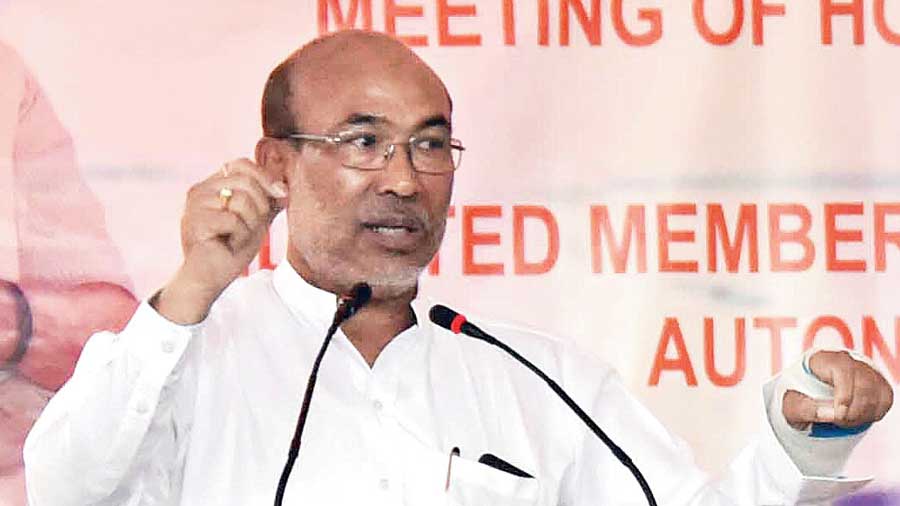 Manipur chief minister N. Biren Singh on Tuesday reached New Delhi to “discuss and finalise” issues related to his council of ministers after the central BJP leadership had last week brokered peace between National People's Party (NPP) MLAs and Singh to save the BJP-led government in the state.

Chief minister office and NPP sources told The Telegraph that Singh would be briefing the party leadership about the prevailing situation and allocation of portfolios among his ministers, which is inevitable with the return of the four NPP MLAs to the government fold.

“This trip is important. He will be meeting party leadership. He has to know about the deal, which has been brokered to save the government and the road ahead. Resentment was brewing against him since last year but his stripping of the portfolios of the deputy chief minister Y. Joykumar Singh in April added fuel to fire, which burst out into the open on June 17, threatening the collapse of the government, a source close to the ruling party said.

He also said the rejig of the portfolios or the ministry will not be easy as it is not clear what Singh might have promised to the other ministers for their support.

The resignation of the four NPP MLAs — Y. Joykumar Singh, L. Jayantakumar Singh, N. Kayisii and Letpao Haokip— on June 17 from Singh’s council of ministers against his alleged autocratic style of functioning had reduced the government into a minority two days before the Rajya Sabha polls.

An NPP MLA told The Telegraph on Tuesday that they are waiting for allocation of their portfolios before joining. He also claimed that Amit Shah played a direct role in resolving the crisis.

“Amit ji told us that he, Conrad Sangma and (Himanta Biswa) Sarma would look after any Manipur affairs. Amit ji had even asked Joykumar ji what portfolio he would prefer — home or finance? We were satisfied with the assurance given to us and accordingly Joykumar ji went and met the chief minister after our meeting with the governor. The government is stable,” the NPP MLA said.

Along with the four NPP MLAs, one Trinamul MLA and an independent MLA also withdrawn support.  Three BJP MLAs too quit the party on the same day. Next day, the newly stitched Secular Progressive Front, led by Opposition Congress, staked claim to form the government.

However, the BJP nominee won the Rajya Sabha polls and the Singh government, too, has survived following the intervention of BJP leaders Ram Madhav, Sarma and Sangma.

Sarma and Sangma took the four NPP MLAs to New Delhi for meetings with BJP national president J.P. Nadda and Union home minster Amit Shah on June 24. The next day, the quartet submitted a letter of support to the Singh government to governor Najma Heptulla in Imphal in presence of Sangma and Sarma.