In Assam, a campus puja sends a signal against citizen bill 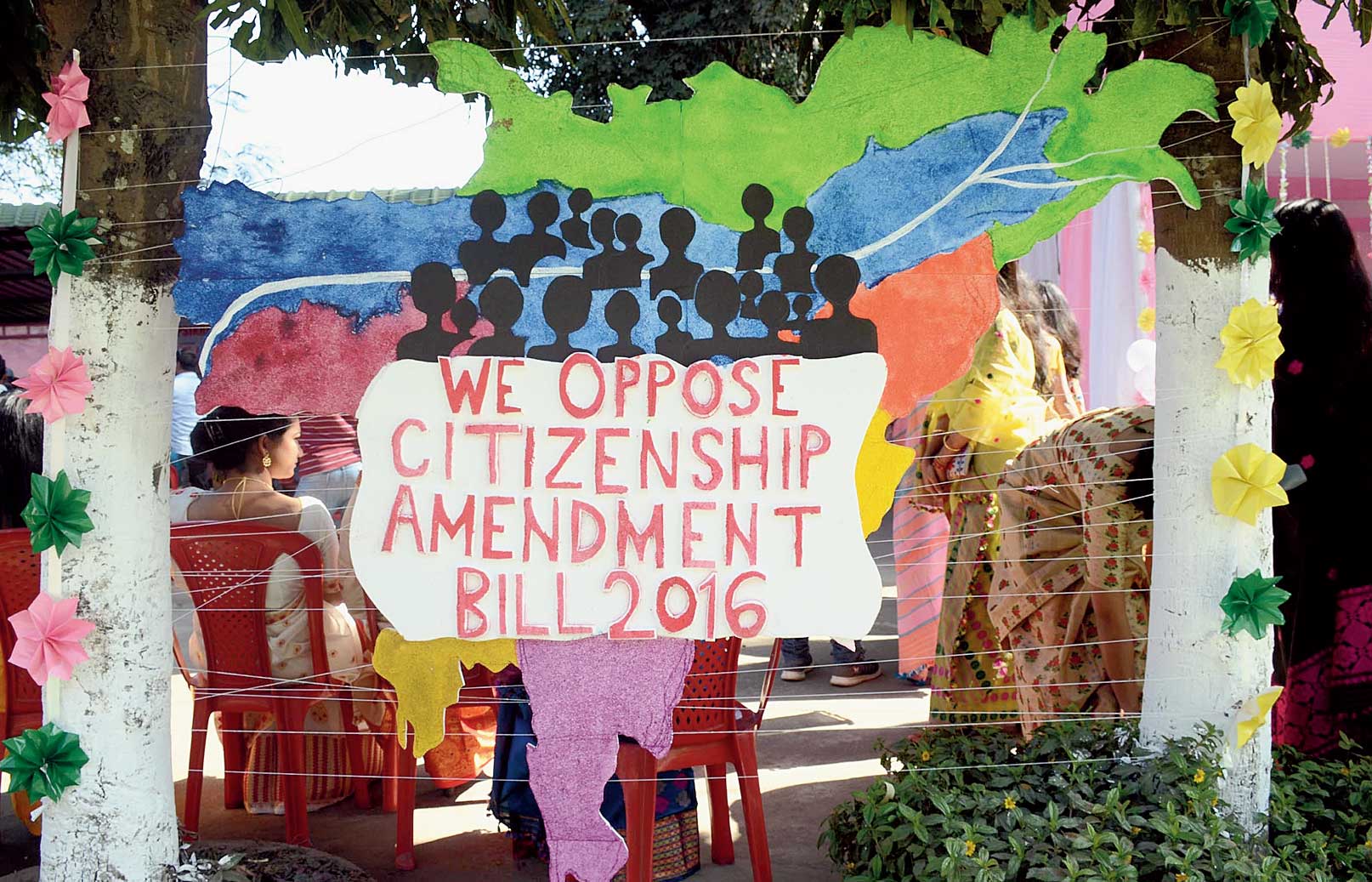 The decoration at the Saraswati Puja celebration at Cotton University in Guwahati on Sunday opposing the citizenship bill.
Picture by UB Photos
Our Special Correspondent   |   Guwahati   |   Published 10.02.19, 10:19 PM

Campus and custom have closed ranks to echo the opposition of the Northeast to the Citizenship (Amendment) Bill that seeks to grant nationality rights to persecuted non-Muslim immigrants from India’s neighbourhood.

The students of Cotton University in Guwahati, the oldest such institution in the Northeast, have made use of Saraswati Puja décor to convey their stand on the bill. Large sections of the Northeast fear that if passed, the bill will change the cultural and demographic character of the region forever.

A handmade multi-colour cut-out of the map of the Northeast with “We Oppose Citizenship Amendment Bill, 2016” written on it was a part of the puja decorations here on Sunday.

“On the auspicious occasion of Saraswati Puja, it was our symbolic protest against the bill, which will spell doom for the indigenous people of the Assam and the Northeast,” Pranjal Kalita, the general secretary of Cotton University Students’ Union, told The Telegraph.

He said under no circumstances could they accept the legislation and they were ready to go to any extent to resist it.

Some of the students expressed anguish at the way Prime Minister Narendra Modi backed the bill at a public rally at Changsari on Saturday. The bill was approved in the Lok Sabha on January 8 but it is yet to be passed in the Rajya Sabha.

“Prime Minister Narendra Modi had announced yesterday that they will pass the bill and we strongly condemn his statement. This bill will threaten our language, culture and very existence, which we cannot allow to happen,” Kalita said.

He said if the bill was passed in the Rajya Sabha and became a law, they will be left with no other option but to intensify their agitation.

Students of Gauhati University and activists of the All Assam Students’ Union (AASU) had waved black flags during the Prime Minister’s visit to the city.

The AASU on Sunday appealed to all Opposition political parties to vote against the citizenship bill in the Rajya Sabha.

A delegation of AASU and North East Students’ Organisations (Neso) went to Delhi on Sunday to meet the leaders of the Opposition parties and urge them to vote against the bill.

Former BJP leader Yashwant Sinha on Sunday derided the bill, saying it was wrong from the perspective of the Constitution, national ethos, the Assam Accord, and the principles of leadership.

The former minister said no one had the right to change an accord (the Assam Accord), suggesting it was a national commitment “we have to maintain at all cost”.

Sinha was speaking at a seminar, “State of the nation and the way forward”, where he criticised the BJP government under Modi.

The event was organised by the Assam Nagorik Samaj, a forum of intellectuals, academicians, civil society members and journalists.