17 people have been arrested for the assault on the medical officer, pharmacist and a garden employee 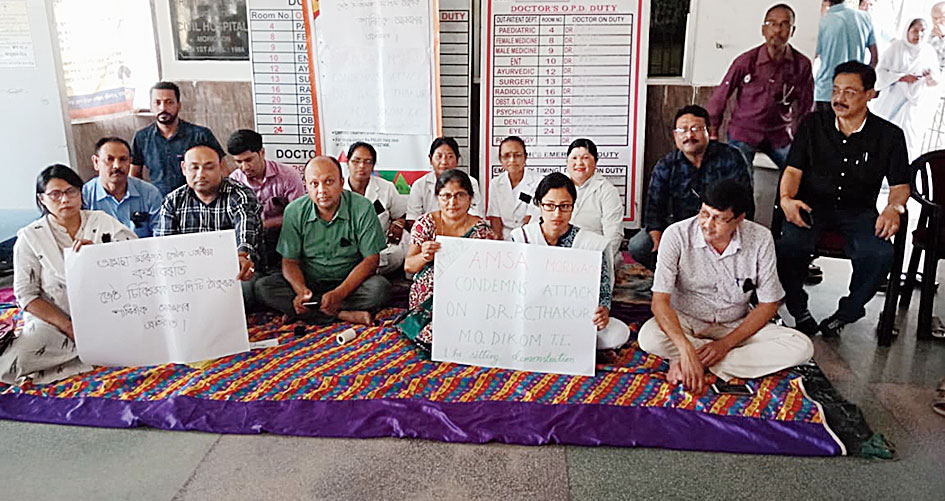 The Indian Medical Association on Saturday urged Dispur to start an awareness drive on the Assam Medicare Service Persons & Institutions Prevention of Violence and Damage to Properties Act, 2011.

The appeal follows an assault on a senior doctor of Dikom tea estate, Dibrugarh, after the death of a woman worker in the tea estate on May 6 and aims to prevent a repeat. The association’s members in Assam also staged a statewide protest on Saturday against the incident.

So far 17 people have been arrested for the assault on medical officer P.C. Thakur, pharmacist Bankim Phukan and a garden employee.

IMA national president Dr Santanu Sen, in a letter to chief minister Sarbananda Sonowal, demanded strong action against the culprits and steps for implementation of the act to prevent assault on doctors and their establishments in Assam.

IMA Assam branch secretary Hemanga Baishya said it had requested Dispur to ensure proper display of salient features of the act in government and private health care centres through posters.

IMA members on Saturday said other forms of mass media should also be used to publicise the act to check the rising attack on doctors and hospitals. The members wore black badges throughout the day in protest. The agitating doctors also demanded installation of CCTV cameras in all tea garden hospitals.

“We strongly condemn the assault. If the government doesn’t take concrete measures to stop such incidents, we will be forced to intensify our agitation,” said Prashant Agarwal, joint secretary of IMA Assam state branch.

Hrishikesh Hazarika, in-charge of Dikom police outpost in Dibrugarh district, said, “Normalcy has returned to the garden but we are keeping a close watch.”

Samar Jyoti Chaliha, superintending manager of Dikom tea estate, while speaking to this correspondent, denied any lapse on the part of the management for the death of the woman worker, Jhalo Surjan. He said the violence which followed her death was instigated by some resident non-workers of the garden. “The incident occurred due to a natural calamity at 2.15pm. We reached the Dikom state dispensary with the injured persons at 2.45pm but unfortunately she died,” he said.

After the incident, the garden management declared an indefinite lockout, fearing further breakdown. “However, after written assurance from the workers that they will not allow any non-resident workers to come and create mischief in our garden, we have decided to lift the lockout from Monday,” Chaliha said.