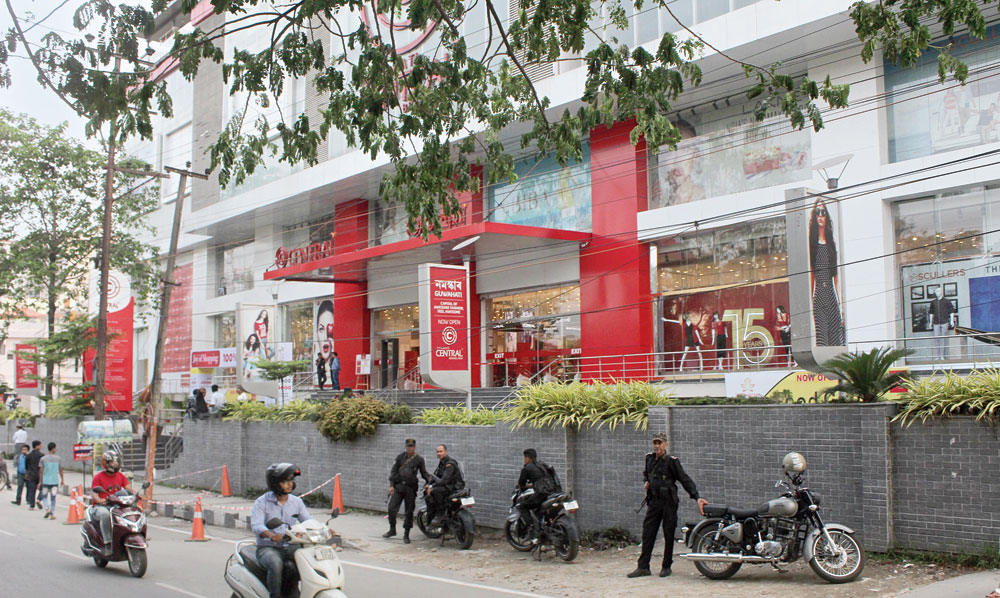 Business almost came to a standstill on Thursday around the grenade attack site on RG Baruah Road, a day after the powerful blast jolted the city on Wednesday evening.

Guwahati Central, the mall outside which the grenade attack took place, kept its doors open for shoppers on Thursday but recorded less footfall. Street vendors, however, kept clear of the area.

At least 12 people were injured, two of them critically, when two motorcycle-borne youths reportedly lobbed a hand grenade at a police picket in front of Guwahati Central, around 25 feet from its main entrance, on Wednesday evening. While some of the injured have been discharged after treatment, several others have been admitted to Gauhati Medical College and Hospital, Nemcare Hospital and KGMT Hospital here.

Mall authorities said they opened shutters after the police visited the site in the morning and assured them that there was no threat of another attack.

Though the blast occurred in front of the mall, there wasn’t much damage to the property. Five glass facades broke but they have been replaced.

The mall, which opened last year and trades in more than 500 labels, is the go-to fashion destination for all occasions. The mall is open on all days from 11am till 9.30pm.

Mall official Dinesh Lal Gowala said, “The mall opened at 10am on Thursday like on other days and started business at 11am. But the footfall was about 70 per cent less — the lowest in the mall's record — apparently because of Wednesday’s blast. But some people are still coming, which is a good sign for us. We are expecting more footfall after a week.”

Its security supervisor Jitendra Kumar said, “Security has been tightened. Last night, we deployed four additional guards against the usual one on night duty. Security guards manning the entry and exit gates were advised to strictly check all vehicles.”

“About 100 cars and motorbikes were parked in the complex on Thursday compared to the more than 500 two-wheelers and four-wheelers parked on any other day,” said Baby Begum, a security guard at the entry gate.

The impact of the blast was even more evident in business activities in and around the mall.

Kaustabh Moni Koch, owner of Deli-C-Us restaurant near the mall, said, “There used to be four sweet corn vendors and five small paan shops in this area — from Shraddhanjali Kanan Park to Guwahati Central — but today (Thursday) all are closed, may be because of yesterday’s blast. I was serving chicken fried rice to a customer when the blast occurred.”

He added, “I usually register a daily sale of around Rs 5,000 but today it has been only Rs 2,000. I had very few customers today. Even the employees of Guwahati Central did not come to my restaurant.”

About a 100m from the mall, Shraddhanjali Kanan park, one of the busiest in the city, also felt the impact of the blast on Thursday.

The Assam Congress, criticising the BJP-led state government for its “failure” to prevent the blast, said this proves that the state home department is virtually non-existent.

Senior party spokesperson Apurba Bhattacharjya asked, “Why did the police fail to prevent the blast just a few days after a security meet with chief minister Sarbanada Sonowal?” He claimed that the Congress had improved law and order in the state. Dispur should give utmost importance to securing life and property, he added.

Leader of the Opposition Debabrata Saikia also said the incident reflects the deteriorating law and order situation in the state. He demanded that the state government fill up all vacant posts in the state home department and give free treatment to the injured.

PCC president Ripun Bora condemned the incident and demanded that the government immediately apprehend the culprits.

The All India United Democratic Front (AIUDF), condemning the incident, also said that the BJP-led state government had failed to protect life and property.

The party’s general secretary, Aminul Islam, demanded stringent action against terrorism. “The BJP-led government has failed to keep its promise of protecting the life and property of the people of the state,” he said.

The AIUDF demanded free treatment and compensation for the injured. The Asam Sahitya Sabha and singer Zubeen Garg, among others, condemned the incident.